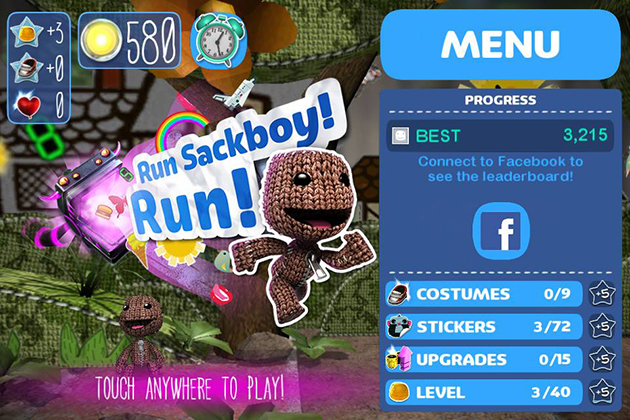 I’m sure many of you are familiar with the extremely famous LittleBigPlanet video game series. The franchise has gained countless fans through the years, including myself, which resulted into the making of a sequel for the PS Vita, and more recently the creation of a 3rd game for the PS4.

The game’s developers probably thought that the announcement for the new game is not enough for the fans so they decided to surprise us with yet another game, this time for our portable devices. The game’s title is Run Sackboy! Run! The title is not only funny but self-explanatory as well. As you can guess, it features our beloved hero running to escape a huge monster named Negativitron, who is pursuing him.

While it is similar to other games of the same category, such as temple run and subway surfers, Sackboy moves one step forward and delivers something unique.  But let’s take a look on what the game is about first

As I mentioned above, Sackboy runs for his life in an attempt to escape from the grumpy Negativitron. Players will reunite with their favourite characters from the PlayStation games of the series and nostalgia will certainly hit them with the unique worlds that only LBP knows how to create (and a fan can enjoy).

Although it’s an endless runner game (meaning only one game mode), RSR speeds up the game by bringing us new scenery every time the player reaches a certain point, and makes the quest much more interesting by adding more items than just coins for Sackboy to gather. Items include bubbles which are used in the shop to buy costumes and power-ups. Gathering a certain amount of bubbles provides you with a shield power-up, which protects you from enemies and allows you to walk on pink goo without slowing down.

In addition LBP fans will be pleased to hear that RSR includes stickers as well. What would a LBP game be without stickers, anyways?! So, players can collect stickers to unlock prizes just like in the platform games. The player can find them scattered throughout the various different worlds, and if you collect all stickers of a particular set you win prizes such as Save-Me Hearts or costumes for Sackboy. It also includes some other extra features that are seen on the LBP games, such as such as jumping on top of enemies, avoiding spikes and traps, and others. 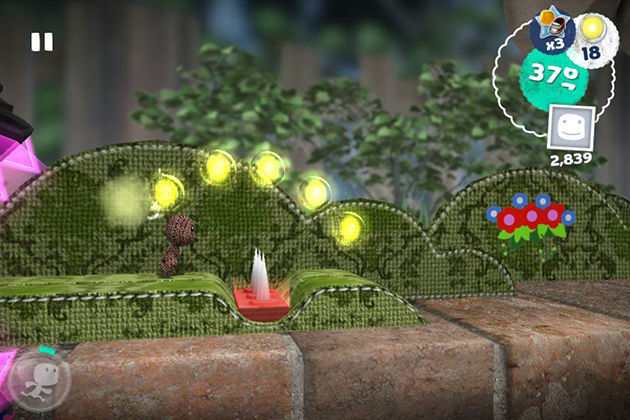 The controls are easy to use and the optional tutorial at the beginning of the game makes things even clearer. The player’s role is to help Sackboy jump and dash forward to avoid being eaten by Negativitron, a vacuum cleaner that is sucking creativity. Just tap once to jump, or tap and hold for a higher jump. On his way, Sackboy will have to avoid spikes, gaps, goo and of course several enemies.

But there are more surprises. The game includes plenty of missions for you to complete on each run, and accomplishing them gets you rewarded. The player can also grab power-up items during the quest, which include bubble magnets, jetpacks, and others.

The game’s graphics are top-notch, matching the great graphics of the PS games and the music and sound effects certainly makes the gameplay much more enjoyable.

As a conclusion, I have to say that RSR certainly lives up to the legacy of LBP games. It’s clear that the developers wanted to give the fans something they deserve for all the support they have shown all these years, plus lure newcomers into the LBP franchise by trying out this wonderful platform game. I definitely recommend it for everyone.

The game is available only for iOS devices.