Home
Articles
Interview with Mauricio Garcia from The Game Kitchen, developers of The Last Door

Interview with Mauricio Garcia from The Game Kitchen, developers of The Last Door

We first mentioned The Last Door game in our list of The Best Adventure Gamebooks for Mobile. This awesome indie game deserves more spotlight though so here we are again, this time for an interview with Mauricio García, one of the developers.

The Game Kitchen team has done quite a few interviews so far (on TruePCGaming, Capsule Computers, Thunderbolt, Just Adventure, Blackman’N Robin), so we'll try to skip the already answered questions.

Without further ado and also because I managed to trick Mauricio into doing the intro for me while answering the first question :), here are 15 answers from the team behind The Last Door.

1. For the readers who have not yet heard of your game, can you do a quick recap of your story so far? Who's behind the game?

Our game is a point and click adventure, very dark and in the mood of the ‘weird tales’ literature, heavily inspired by classic horror authors like HP Lovecraft and Alan Poe. The game starts with one of our main characters, Jeremiah Devitt, receiving a letter with a cry for help from one friend of his. In its way to meet him, he will uncover hidden memories of his own, casted by mysterious events that took place while they both met in a boarding school in their youth. This game is made by The Game Kitchen, one small group of spanish dudes who once dreamt of getting a life making video games. The Last Door is, in fact, our first independently created game as a studio (before this, we've been doing a lot of work for hire).

With one eye open ;). Now seriously, we really like how this project is turning out, so on the one hand we can take that proudly to bed each night, but on the other hand, being independent and in the middle of a really deep economic crisis in our country, we usually go to bed wondering how the hell are we going to fund the next episode.

3. What's the story behind choosing the brand names, The Last Door and Game Kitchen?

"The Game Kitchen" was proposed by one of the founders, Alejo, who moved on to work as an independent game designer consultant when we started working on The Last Door. He just pitched the name to the rest of the team, and we liked it.

At a certain point, to decide the project we will be working on, we made an internal idea contest, and this won: "The Last Door" was the title of the game’s concept pitched by Enrique, and that eventually evolved into what it is now. The pitch consisted in a PowerPoint mockup of how the game will look, feel and play. It was already remarkably similar to what we end up doing. A hell of a mock up if you allow me the expression!

4. What made you move from Kickstarter to funding through your own site? Isn't that limiting your funding options?

Yes, is somewhat limiting, but living is Spain we didn't have much of a choice. Nowadays, KS uses Amazon Payments to transfer the money raised to creators, so you as a creator, must be eligible for Amazon Payments, which simply are not supported in Spain yet. So, in short, you can’t publish projects from Spain in Kickstarter. Back in the day, one of the team members was living in UK and had a bank account there to receive payments, which is what enabled us to use KS for the first episode.

Also there are more inconveniences we learnt of with the experience of episode 1: not only payment processor and KS get their cut, but also your banks when you move the money from one country to another, and is much worse when there’s a currency exchange in between (from LBP to EUR in our case). So this scenario is far from ideal, especially considering it was going to be repeating for each episode...

Finally, moving the payments to our platform granted us many benefits. The main one is that the money people sent our way is available to be spent (paying the office bills and our small wages) in two to three days. This is incredibly helpful. 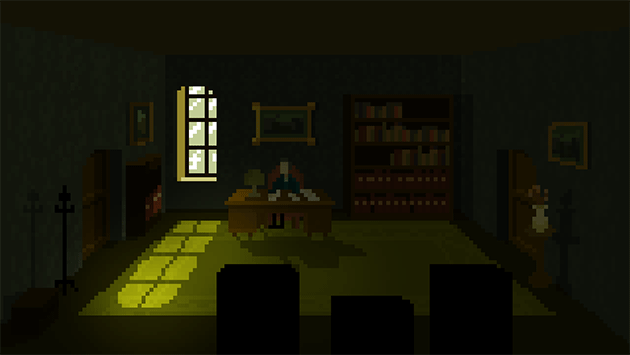 5. Are there or have you considered adding hidden tricks to the game, such as a bonus mini-chapter upon completing specific actions?

Yes! The Collector’s Edition has a ton of Easter eggs, which make the game more enjoyable for those who want to play more than once. Sometimes we tell a part of the story that wasn't previously stated, and other times we used this secrets to pay homage to the classic horror authors that inspire us day by day.

6. Have you considered doing a non-pixelated or less pixelated chapter to test/challenge the audience?

We've played with this idea more in the Second Season where we occasionally use particle effects and every now and then we break the visual rules to draw players attention. Creating a radically different visual style in a future episode is not on our radar, at the moment. Unless we could find an interesting enough narrative excuse to do so ;).

7. Why did you move away from Flash in Season 2? Why pick Unity Web Player instead and not another alternative?

The main reason behind this was how freaking hard was to make the Collector’s Edition. Even though the first four episode were already done when we started, putting them all together in a single product proved much more difficult than it should have been. And for us, the programmers, who suffered the most in the process, Adobe Flash was to blame. Well, to be fair, you can avoid many of the issues we ran into by using the GPU accelerated APIs (called Starling) but in that case, you lose the ability to use Adobe Flash CS as an integrated editor for the scene building.

For the mobile editions, it was even worse. You don’t have much control over what’s happening inside the terrible mobile Adobe Air virtual machine, resulting in the game crashing with memory issues no matter what type optimizations we put in place. The mobile port was really close to be cancelled, until we become aware of Autodesk Scaleform. This is a complete replacement of the Adobe’s virtual machine, which enable programmers to go really low level with C++ and optimize the application to perform like it should. It saved the day, and the mobile port runs like a charm, but it took us a huge amount of time to deliver this port, which also delayed the premiere of the new Season.

In the end, when we started working on the Second Season, it was clear to us that need to move away from the Flash ecosystem, or we were doomed to repeat the painful delivery of the next season when the time come. Also, it was an opportunity to implement a new way to create episodes that could be much more productive than ever before. We had experience with Unity in the past, and the reason we didn't used it in the first place was only because it didn't support 2d games at the time we began working on TLD.

8. You said 'No' to consoles before. Did you change your mind?

Well now that we have a working engine and really smooth production pipeline, we’re in a very different situation. The fact is if we could make a deal to help us distribute the game in consoles, we’d be pleased to do so!

Early March probably, but we don’t have a date yet. 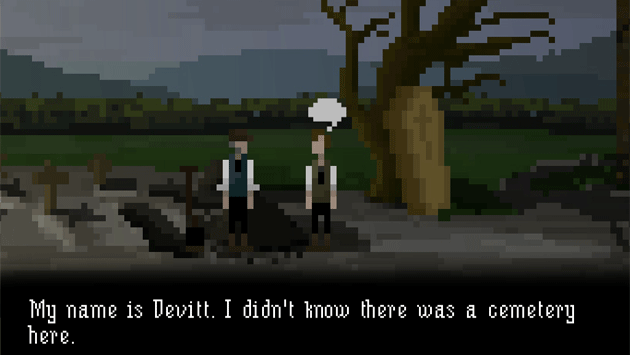 10. How is Season 2 progressing compared to Season 1? Has the interest in the game receded?

Not really, players were really eager to see what the new Season was about, and they've been loving the new characters and engine features. Episodes are now longer and more complex than ever!

We've been experiencing a slight decrease in donations, but this is normal, since we've been operating without a community manager for a couple of months now. Our former community manager, Raul, started his own startup and needed to put all his time into it, and then we brought someone to replace him but she was offered an offer hard to refuse elsewhere and took of. We’ll be hiring somebody really soon, I'm sure it will work better this time around ;)

11. Is the core team working full time on The Last Door or doing side-projects as well?

We’re all working full time in The Last Door, with the exception of Carlos Viola who occasionally makes soundtracks for other games or movies. Also we’re about to start giving game making classes in a local study center.

12. Do you find any downsides with the mobile port, the Collector's Edition? For instance, on PC I like hovering a lot over clues, which you can't do on iOS/Android.

Controls are obviously required to be different in a touch environment. The fact to the matter is that you can actually hover over clues in the mobile version too, you just have to swipe your finger across the scene and the cursor will show up, similarly as you do in PC.

Apart from that, the mobile version has slightly reduced audio quality, for size reasons. And that’s about it, the rest should be on par with the PC version.

13. Looking back, from development to marketing, would you have done anything different? Can you share some advises for new indie game developers?

I would say that it took us some time to understand how important is to “advertise” your product. You need people to know about your game, and that’s a thing that requires a lot of effort (especially if you don’t have a marketing budget). We introduced a person in the team, a community manager dedicated to this, very late in the process. It did have a very positive impact, and we should have done it sooner. Learning to market your product is as important as making it as good as possible.

14. The fun question: What do you guys do in your spare time? Anything applies, indoor/outdoor activities.

I myself I’m sort of a social activists. As I mention before, our country is in very bad shape, and that’s not going to solve by itself so I volunteer a lot spare time to that. Daniel likes to play soccer. Enrique and José Antonio are constantly practicing new artists techniques. Enrique also plays the drums, and Carlos plays, well an awful lot of instruments. And we all do play a lot video games of course! 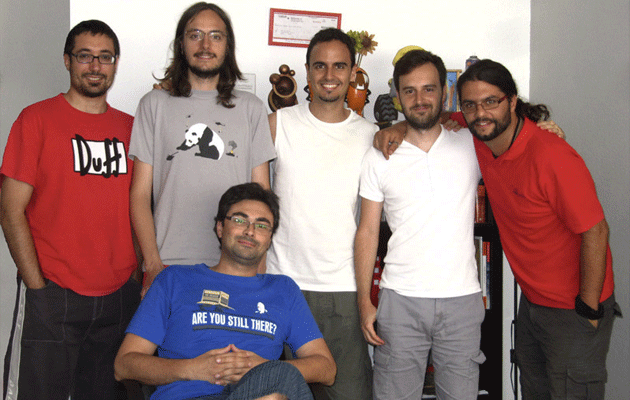 Well I guess ours is a story of pursuing a dream. I would say to anyone with aspirations or dreams that the key to get them to become reality is: persist motherfucker! Try to do something, fail, and then try again. We've needed years of doing just that, so patience and stubbornness is required, but it’s possible. It’s doable guys! So, don’t let anybody tell you it is not, and go for it!

Thank you Mauricio García for this incredibly informative and inspiring interview!

To all our users who haven't played the game yet, we recommend you head over to https://thelastdoor.com now and give it a go. Turn your volume up and prepare yourself to be transported into a book-like adventure story, with horror twists!

Support the next chapter by donating at https://thelastdoor.com/index.php/donate.

#news #interview
Comments (0)
< PREVIOUS ARTICLE
Facebook user base increases 13 percent with 1.4 billion active users
NEXT ARTICLE >
How to Open the Command Prompt at Boot in Windows 10