Home
Articles
In search of the best uninstaller for Windows

In search of the best uninstaller for Windows

Whenever you uninstall a program from your computer through Windows’ Add/Remove feature, not everything created by that program is removed- junk files and registry entries are left in the system, causing significant slowdowns if lots of useless data is piled up. So what can you do about it then? The best solution for this problem is to use a 3rd-party uninstaller, which can scan and delete any files and registry keys related to long-gone software.

There are so many uninstallers that it’s quite hard to decide which one’s the best. We at Download3k narrowed down that list to only four of them, which do a terrific job in cleaning up program leftovers, and then tested each one thoroughly under the same conditions in order to compare the results in the end - that would lead us to the winner. So the ones that got to make it in this comparison are Ashampoo UnInstaller, Geek Uninstaller, IObit Uninstaller and last but not least, Revo Uninstaller. Now let's get to work.

Ashampoo always does its best to satisfy users, and Ashampoo UnInstaller is a proof of that. Like all of Ashampoo’s products, this one too has a cool interface that makes it user-friendly and convenient. But let’s get more in-depth.

UnInstaller 5 has a huge advantage against the rest because it is really, really quick. When you install a program, it will take snapshots of your system before and after installation, so that it can compare them and record the changes made by the installed software. This process can be quite slow, but Ashampoo has improved UnInstaller’s engine to make it a really quick task, something that will definitely give it some points. Its radar can be enabled to pick up automatically installations of programs, or it can be disabled so that you can manually let it monitor by right-clicking on an executable and selecting “Install with Ashampoo UnInstaller 5”. In addition, UnInstaller marks corrupted entries in its list of installed software so that you can notice them (that’s a big plus); it can’t remove them completely though unless their installation was monitored- otherwise it will just let you know that the best it can do is have their entry removed from the list, hinting that UnInstaller works well only with monitored installations. Uninstalling a working program that was not monitored means that Ashampoo Uninstaller will try to scan for leftover files, folders and registry entries after the normal uninstallation process is finished (the difference with uninstalling monitored programs is that it doesn’t have to scan the system since it knows what to remove).

Installed updates of programs are not in groups but are independent entries in the list. You can create groups manually, but that’s a waste of time.

UnInstaller comes with other nice features too. It has a set of tools from cleaning and maintaining your computer such as Registry Optimizer, Drive Cleaner, Internet Cleaner, System Restore Manager, File Wiper and others. It’s not a bad move to use the Registry Optimizer after uninstalling programs. 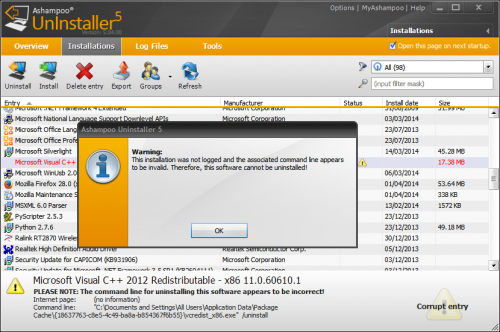 Let’s move on to the next combatant though.

Geek Uninstaller comes as a portable executable. The fact that it needs no installation makes it an easy and quick solution to many users. It doesn’t have an astonishing interface, but it focuses on getting the job done right. It lists all installed software in the computer and groups their updates together, making it easier to uninstall a program partially. Geek Uninstaller doesn’t have as many features as Ashampoo UnInstaller, but the ones it has are very useful. You can uninstall a program normally or use “Force removal”- a function that removes programs which cannot be normally removed due to corrupted installation, broken uninstaller, etc. By right-clicking on a program from the list you can go to its registry entry, installation folder or visit its website. Additionally, Geek Uninstaller can search Google for any of the installed programs and redirect you to the results page- that's quite useful for gathering information on a particular software that you don’t know where it came from and what it does. 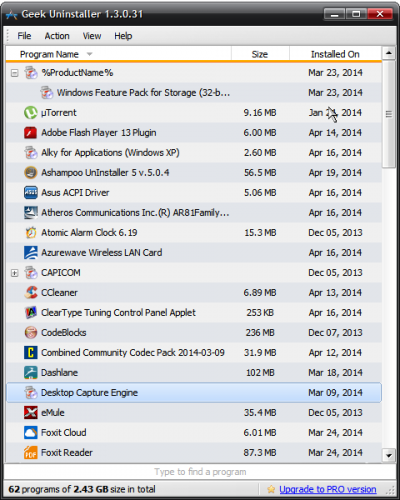 While it’s neat and powerful, we don’t know yet if it’s better than IObit Uninstaller.

This one is a semi-portable app and doesn’t require installation, although after running it for the first time it installs itself automatically in the background. IObit Uninstaller has 2 main tabs (Programs and Toolbars/Plugins) and the items listed under each one are divided into different categories (as you can see it’s the only program that listed browser plugins as installed software). So for example, in the Programs tab, installed software are divided into All Programs, Recently Installed, Large Programs, Infrequently Used and Windows Updates. Notice how differently IObit Uninstaller handles program updates; Ashampoo UnInstaller was listing them along with the rest of the programs, Geek Uninstaller was grouping them together, and now IObit Uninstaller keeps them in a completely separate category. IObit Uninstaller also has a feature that neither of the previous two has: the ability to batch remove programs. Don’t get too excited however- you still have to manually go through all of the uninstallation steps for each program in the batch like you would normally do. Of course, every time you remove a program using IObit Uninstaller, it will scan and remove any junk files and registry entries left. 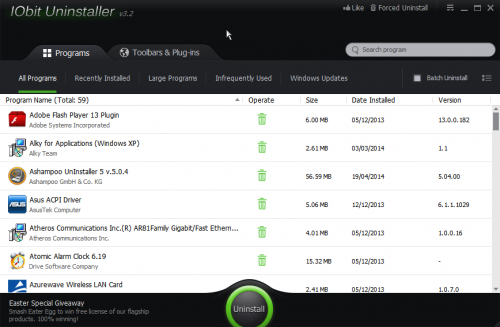 Next and final competitor is...

Revo Uninstaller is probably the most popular uninstaller and is preferred mostly due to its easy to use nature and advanced features. These include the ability to monitor program installations (similarly to Ashampoo UnInstaller) and to use different methods of removal. Whenever you want to uninstall a program, the built-in Uninstall Wizard will appear and create a full registry backup and system restore point. Then the program’s uninstaller will run, and when it’s done the Uninstall Wizard will ask you to run a scan for leftover items. You can choose between Safe scanning mode (fastest), Moderate (a little slower but scans in more locations) and Advanced (scans in every place in the registry and hard drive for data that was not deleted). This way you can make sure that no trace of the program exists in your computer. Other techniques of uninstalling programs with Revo are Force Uninstall (for corrupted installations/uninstallers) and Quick Uninstall (for quickly uninstalling a program and automatically removing all found leftovers). Batch Uninstall is supported too- you can select multiple programs but you can only remove them using Force Uninstall or Quick Uninstall. 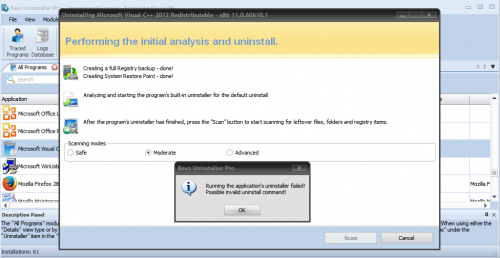 And even though Revo seems to have many advanced features, we still haven’t seen how good it does against the others. So now that we finished reviewing each one and its features, let’s compare them.

The test is this: We tested the fighters under several conditions to see where they pass and where they failed. In our testing environment there was a corrupted program with an invalid uninstall command (the uninstaller was missing). We also had two “hidden” installed entries installed in the computer; corrupted components that were part of other uninstalled programs but weren’t removed. This helped us better see how good each testing software is in finding installed programs (note: Windows Add/Remove feature showed none of the two “hidden” programs).

Let’s start with Ashampoo. It has a solid interface and nice features, but unfortunately it didn’t include 2 programs in the list of installed software. In addition to that, although we had enabled monitoring in the background, it didn’t pick up an installation we tried to perform. It was our intention to fool UnInstaller (we’re a bit evil when it comes to tricking people programs), so with the help of Internet Download Manager we downloaded the installer of a program, and when the download finished we opened the file using the Open command in IDM’s “Download complete” dialog. Ashampoo Uninstaller didn’t even notice there was an installation was taking place under its nose… it would get the grasp only when we double-clicked on the installation package normally. As for the broken program that couldn’t be uninstalled, Ashampoo UnInstaller would only remove the entry from the list (it wouldn’t even scan the system for any related files and registry keys), and it was the only one that failed in this part of the test. For those reasons it loses more points than it gains from having extra features.

But don’t think that Geek Uninstaller is perfect either. It only picked up 1 of the 2 installed software that Ashampoo Uninstaller missed. But when it saw a corrupted installation, it would try to remove any linked files with it. There isn't anything else to say about Geek Uninstaller actually- it has an average interface, basic features and simply good functionality.

As for IObit Uninstaller, well, it found only 1 of the 2 “hidden” installed software- and it wasn’t the same that Geek Uninstaller got. But at least it can remove unwanted crap from browsers as well, a feature not seen in any of the other 3 uninstallers.

Revo Uninstaller found only 1 “hidden” software (the same as Geek Uninstaller). It’s actually the most complete uninstaller, since it gives its users the power to delete any program and remove all traces of it. The big number of powerful features possibly make it the most advanced uninstaller around.

All of those 4 programs are winners, especially since they all did better than the default Windows Add/Remove option, and each one is more suitable for a different type of user:

There you have it. Now you know the truth, at least from our perspective. Some people might dare disagree, so if you have other opinions or want to point out other things not covered in this article, we’d be glad if you shared them with us in the comments below.

#comparison #windows
Comments (0)
< PREVIOUS ARTICLE
How to remove Skype ads
NEXT ARTICLE >
Russia May Ban Gmail, Skype and Facebook if They Refuse to Store User Data within the Territory of RF