Game review: Totem Forge is the new game by Exaltrix 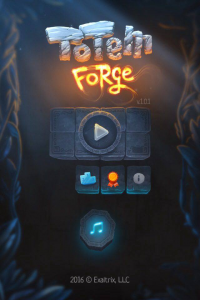 Totem Forge is the debut game of new indie studio Exaltrix and hopes to capture the attention of players and make a good start that will hopefully lead to more fun games in the future. Totem Forge is a match-3 game that takes its own liberties to stand out and be it own thing among the plethora of puzzlers available. Let’s take a look and see what Totem Forge has to offer and if it manages to achieve its goal.

In Totem Forge the player has to drop gems in the board and make sure that the gems in each column don’t reach the bottom. Your aim is to reach the highest score possible. The controls are simple; all you need to do is tap on a gem from those that appear at the deck at the bottom of your screen and it will be placed on the board by itself. You can’t control where to place the gem though. It will be placed at the column that is right above it and if the colors match, then similarly to all match-3 games, if you connect 3 or more same colored items, they will disappear. By making these combos the board also changes or more combos are made, like a chain, and you are given more points and of course more free space at the board. When you fail to make a combo, a new row with elements appears at the board, making your job more difficult and challenging.

The deck also refills every time you use an item. It is also divided in two and depending on which side you use the item from, it will refill accordingly. You can use that in your favor to aim for the item you need on one of your next moves but of course luck plays a huge factor on winning this game.

When a column reaches the bottom, the last element burns and this is both good and bad. It is good because others become more valuable when burned and others gain new abilities, but with every wrong move, you lose a Hit Point (there are five in total at the bottom center of the board) because the board attempts to make new rows but is unable due to one or more columns touching the bottom. When all hit points are lost, it is game over. The Hit Points are restored when the board is cleared. Under the deck you will notice a shield-like icon with an element at the middle. This icon shows you what the next element to appear on the deck will be and helps you organize your moves. 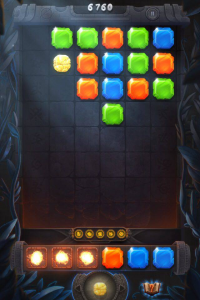 The game becomes more interesting with the addition of power-us and obstacles. Power-ups include the Fireball, which if placed on the board burns an element, the Magnet the can move the top element of a column, to the deck, and helps you make combos that are otherwise blocked by this element, and more. The obstacles include the Golem that get in your way and won’t let you make combos in a certain column, and the Gold Nuggets that are tricky to make combos with, as you’ll have to burn them in order to achieve that.

It becomes quite addictive once you engulf on it and you get over the tutorials and first few matches. New secrets appear as you advance and there’s always something to look forward to. It is very enjoyable and rather calming I would say, which in itself, is a fairly odd outcome for a match-3 game.

Totem Forge will be available for iOS devices only, on October 26th for $2.99 and it is free of any in-app purchases.

Visually the game is very pleasant with smooth colors and particularly the Elements are glowing beautifully and I couldn’t stop staring at them. The BG music is very soft and calming and fits the game perfectly.

All in all, Totem Forge is a very well-made game and considering it’s the studio’s first attempt, I can confidently say that we can expect more great things from them. It is challenging without being annoying, it follows the same recipe but adds its own ingredients to give the player a new taste and the result is very satisfactory.

Totem Forge screenshots (above) and trailer (below)