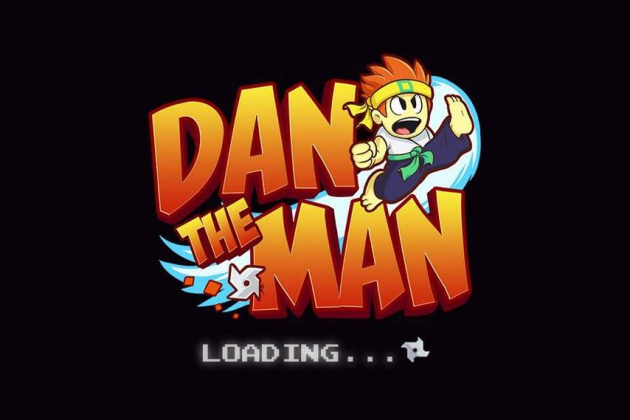 From the developers of Fruit Ninja and Jetpack Joyride, both of which are very popular among the players, comes the game adaption of the comedy web series of the same name by Studio JOHO. Whether you’re familiar with the web series or not, it won’t affect your enjoyment because the game is amazing as it is and knowing its origin only adds to the fun. If you’ve played any of the developers’ past games, then you’ll appreciate this new addition to their list. 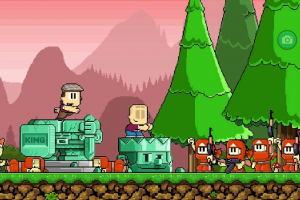 Dan is trying to save the day once again, by fighting an evil organization that has taken over a defenseless village. In the meantime, Jossie, his girlfriend is fighting for survival in a different place while believing that Dan is dead. Quite complicated, isn’t it? Now you need to take care of all the evil guys by doing what Dan does best; punching, kicking and knocking out anyone that gets in your way, and save the village from the evil doers. Will you prove to be the strongest among them?

Right from the beginning you’re thrown into action and have to use your fists to defeat the enemies. The controls appear at both bottom sides of your screen, each with a symbol indicating its purpose. On your left you have the moving buttons and on your right the jump, punch and aim buttons. Most of the time you’ll use the punch button but there are cases that demand more drastic measures and then you’ll use some of the weapons you have available (shuriken, guns, knives and more).

With every enemy you defeat you’re rewarded with coins that you can then use to buy weapons or life increasing supplies. You can also find coins inside vessels by smashing them. To increase your life you can use supplies in the form of various foods. You can find them scattered in different places but you can also buy them at the shops that you can find on each level. Depending on the type of food, they have different restoring powers. 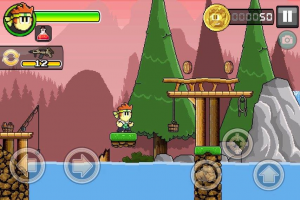 You can also use coins to upgrade your powers but due to their cost, it is not something you should decide quickly. You need to take into account the items you need to purchase in-game and then decide which is more important to you. Luckily, Dan’s strength is quite powerful even in its default mode. You can also play as Jossie and put to good use her own badassery.

The game consists of 12 lengthy levels with checkpoints and boss battles at certain points. The enemies consist of gun wielding mercenaries and other types of guards. The ones with guns are far more dangerous as they can aim and shoot at you while you’re fighting others so try to take care of these first before dealing with the rest. When things become too hectic you need to use your own weapons but use them wisely because the only thing you have indefinitely are your punches.

Moving platforms, hidden passages, and obstacles complete this exciting retro game that won’t leave anyone uninterested. Depending on how fast you complete a level, how many enemies you defeated etc, you are given a score at the end of the level. The levels take place in the village, the forest, underground and in more places that you will discover as you advance. Every level is unique and well-designed.

What is rather annoying in Dan The Man is how unexpected the ads are. You could basically be in a battle and the ad will pop up out of nowhere. In many cases I thought my game crashed but no, it was an ad. I’m used to them appearing after a game over or before a new level, but the random moments in which they appear certainly don’t provoke very calm feelings. 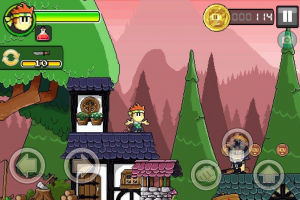 The game gives you the option to buy coin bundles and more characters such as Barry Steakfries from Jetpack Joyride. Also by purchasing once, you get rid of the annoying ads and get some more bonuses e.g. in-game gifts. If you visit the shop you can also get lots of gold for free simply by watching an ad so even if you don’t plan on buying anything, it is a good idea to check the shop from time to time.

Appearance-wise Dan The Man takes the cake. Its retro style is done with lots of care and the designs are very detailed and the characters likable and definitely look like the just came out of a 90s video game. The colors are bright and cheerful and the sound effects, especially Dan’s fighting screams, very enjoyable.

Overall, Dan The Man is a wonderful retro game that will keep anyone who gives it a try, amused. You can also watch the story that leads to the events of the game in its main site: http://danthemangame.com/ and be able to enjoy the game more and with a better understand of what going on and why. If you like retro platformers then you should give Dan The Man a go and more likely than not, you won’t regret it. Let us know your thoughts and impressions in the comments below.

Dan The Man screenshots (above) and trailer (below)