I would never imagine having so much fun and be in absolute awe by playing a game with a tadpole as the main character, yet it happened and there’s no going back for me now! Tadpole Tap, a retro, disguised as an easy and plain game, will steal your heart and there’s nothing you can do about it. 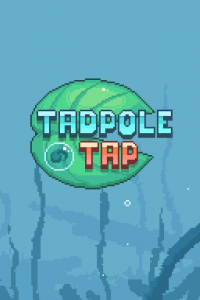 It’s amazing that the people behind this haven’t graced us with other games and yet managed to bring an addicting, unique (in some aspects) game, in the pool of countless game apps, and made it stand out from the rest.

Don’t tell me you expect some deep, dramatic, action-packed plot from this game. The story follows the dangerous life of our lovable tadpole, which tries to survive by catching flies and other insect delicacies with its long tongue. But I did mention the word “dangerous” didn’t I? Well, our hero must escape the hordes of Piranhas that are constantly on his tail, and pull its way through dangerous obstacles!

The player must help the tadpole jump from plant to plant by tapping where you want it to jump by using its tongue. Apart from plants, you will have to collect flies, which are the game’s currency of sorts, and other insects such as spiders. There are various power-ups as well, e.g. the Magnet, which attracts flies to you without having to tap on them for the tadpole to catch with its tongue, or the Invincibility power-up that makes you invulnerable for a few seconds. Many more power-ups will show up as you move forward and their appearance will feel like a soft breeze in a hot day. They can be upgraded to last longer and even be combined to create something unique if you grab a new power-up while a previous one is still active in you Tadpole. 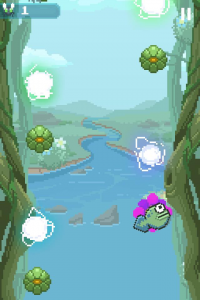 Although it sounds easy at first, something that you will feel it at the beginning, Tadpole Tap hides many surprises for the players. For starters, there are plants where you can’t stand on and you have to jump to the next immediately if you don’t want to fall and start the round all over. Also, there are balls of light, (or electricity, to be correct) that, if you make the mistake of jumping on, cause electrocution to poor tadpole, which is instant game over.

But that’s not all…After reaching a certain point it suddenly starts raining and the water levels increase fast. And what lurks inside the water? Yes, you guessed it right, Piranhas! If you want to escape them you will need to act fast and jump on plants with the speed of light because if the water reaches you, it will be too late.

Collecting only insects and power-ups is not interesting enough, so the game added a surprise to spice things up. More specifically, you will find yellow puzzle pieces here and then while playing and your goal is to collect all of them to find out what’s their meaning.

By collecting (eating) flies you can unlock skins that are basically different kinds of Tadpoles, each with a unique ability that will make things easier for you while playing. Not only that, but each tadpole's ability can be upgraded to get better scores. Flies can even save you from starting over in case of losing. For a small amount you can continue where you left of, but you also have the choice of watching an ad for the same reason.

With a small amount of flies you can also upgrade your tadpole to make its tongue longer. Every time you upgrade, the next upgrade's cost goes up but catching flies is probably the easiest aspect of the game so don't be afraid to spent them. you can even purchase a free pack of flies by watching a video ad. On top of it all, each day you are asked to choose among a large number of chests and be rewarded with currency and more. 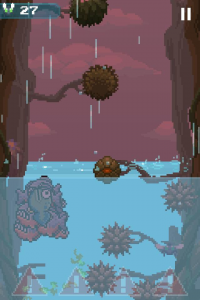 As I mentioned earlier, flies are the game’s currency, but at the shop you can purchase fly packs in exchange for real money. It’s not necessary or forced at you.

The whole retro feeling is lovely and since pixelated games are my weakness, graphics get an instant high score for me. The colors are soft and not bright, to match the swamp environment.

But what impressed me the most was the BG music; it is literally an ode to 90s' console and portable games. I’m sure it will bring back childhood memories for many of you.

If you’re looking for a simple, yet challenging game, which comes in a retro, pixelated package then you should give Tadpole Tap a chance. It is perfect for those who want something easy to learn and enjoy their free time playing with, without worrying about complicated plots, rules and gameplay mechanics. Simple and fun. That’s what Tadpole Tap is. Give it a try!

#android #ios #best games #free #tadpole tap #review
Comments (0)
< PREVIOUS ARTICLE
Game Review: Hearthstone Has Made it to iPhone and Android Devices!
NEXT ARTICLE >
Messengers Compared: FB Messenger vs WhatsApp vs Hangouts vs Skype vs Viber vs Telegram vs LINE