Game Review: Save Silly Sausage from becoming a hot dog! 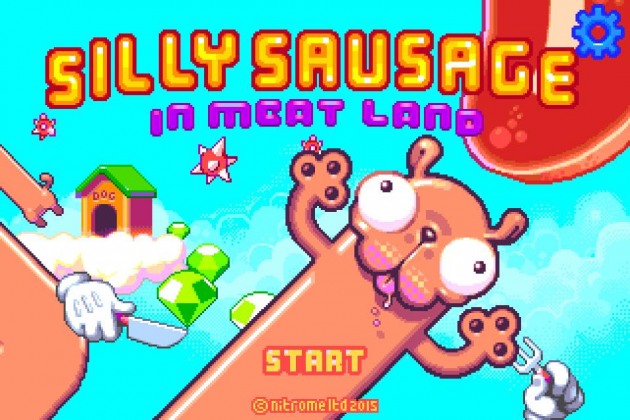 Nitrome is one of those game developers that every time they release something new, it’s just so hard to resist playing it. Their games are unique (in a weird way most of the time), charming and engaging. Before Silly Sausage they have graced the App store with games such as Magic Touch: Wizard for Hire, Gunbrick and Platform Panic. If you have previously checked any of them (or other Nitrome titles) then you’re familiar with the style and attitude of their games. Silly Sausage follows the same recipe of adding weirdness and pixel graphics to a funny game. 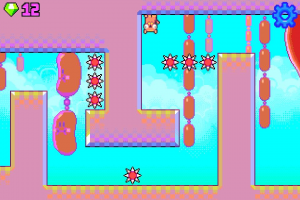 It’s always a challenge to make the plot of a Nitrome game sound "professional", but I’ll try it. The player controls a 16-bit stretchy dog named Silly Sausage and guides him in his adventure through Meat Land. In his way he must collect gems and avoid deadly meat cutting devices (such as knives, crushers, and saws).

The game consists of 50 levels, and the only thing that tells them apart are the checkpoints in the form of dog houses, where you must position the dog in order to activate them. What's interesting about the checkpoints is that to activate them you must either spend gems or watch an ad. You could say, that this is an improvement over the traditional IAP system, where the only way to proceed is to spend gems/money/stuff which you acquire mainly through IAP. However, it will need something a lot better than that to convince me. 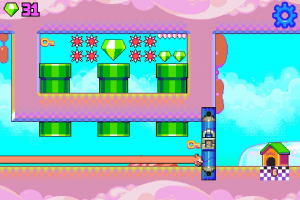 The world in which the game takes place is a meat factory and your silly dog tries to escape from becoming a hot dog (pun intended). You can stretch the dog as much as you want; you will watch it grow more and more, and it will remind you of snake, the game we used to play in our Nokia phones many years ago. But except for stretching, you can also move it in any direction until you find a spot you want to stick to before you move again. Be careful though, because you might end up hitting a cutter and you’ll have to start over. The dog will follow a straight line when it starts moving and you must change course with your finger to make it go up or down.

However, achieving the goal of escaping is harder than it sounds, as the meat factory is full of obstacles and puzzles such as locked gates, moving saws, and even floating hands that hold utensils; these will give you a really hard time because basically, keeping an eye on them while they move (and while you move) is just impossible. There are many other kinds of obstacles in this game too, waiting to steal your precious Silly Sausage’s life.

Apart from the deadly traps, your patience is tested by pipe mazes (same kind as Mario pipes) that is unpredictable where their end will lead you to (it might be a gem, your demise or something completely irrelevant). 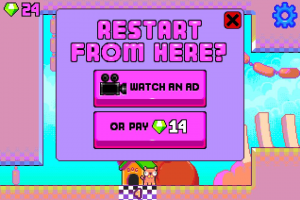 Regarding the locked gates that I mentioned above, they require you to hold Sausage on top of switches (sometimes you might have to position him on more than two switches at the same time) in order to activate the mechanism that opens a gate. The trick in that is creating long paths to step on all switches, but this way the chances of being hit by obstacles or lose your way are increased.

The levels get harder as you move on (obviously), and frustration ensues. Losing a few times will make ads start appearing, unless you purchase the no-ads package (of course!).

The only IAP in Silly Sausage is the ad remover purchase which costs only $1.99. Some people think that it's fair for the purchases to be directly independent from the gameplay, and it does count as an improvement to the overall game app system indeed, since you don't have buy stuff in order to proceed further into the game. Ads are distracting as well though, especially when they take up a fraction of your screen or pop up while playing, which results into pure annoyance. 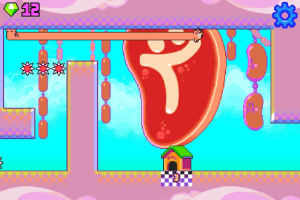 The controls are smooth, although you might experience difficulty while dragging your finger to point the direction you want Sausage to go to, but this is only until you get used to navigating.

Pixelated graphics are my weak spot because of the nostalgic feeling they offer, and the sense of playing in an old-school game console like a Game Boy. Silly Sausage provides all that to a great extend with pretty designs and a variety of vibrant colors. The background music and sound effects match the game’s atmosphere and the visuals because a pixelated game is not complete with the appropriate sounds.

Silly Sausage is a game that I totally recommend to everyone. It's not the type of game that is aimed towards players who like specific things, but instead it's a game that anyone can enjoy. If you can bear ads, you'll find the game quite enjoyable since there are no IAP traps. And the best of all (I purposely left it for the end): you can have the dog smell its own butt. What more reasons do you need to ty it out?!