Home
Articles
Game Review: PAC-MAN 256 is the New Retro Journey into the Past!

Game Review: PAC-MAN 256 is the New Retro Journey into the Past! 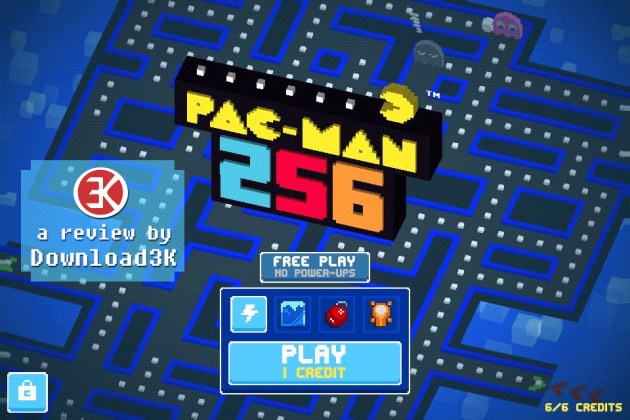 Pac-man is one of the most loved games by people who had the pleasure of experiencing the release of the original game, and by new fans alike. The reason is simple- Pac-man represents the big bang of the video game industry and with its simple yet challenging gameplay, it encompasses everything a player wants to experience in a game: fun, challenge, easy to follow rules, the joy of winning as well as not too difficult to beat enemies and stages. Knowing all these, the developers of Crossy Road, Hipster Whale, decided to bring back Pac-man with the blessings of Bandai which resulted in the making of PAC-MAN 256, an endless maze of fun that will bring back lots of memories to many of you. 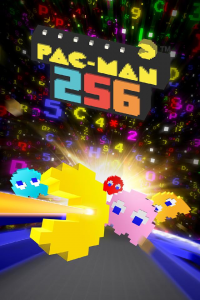 Faithful to its roots, PAC-MAN 256 doesn’t stray from the "old but gold" story of the yellow ball, Pac-man, and his goal to collect dots despite the dangerous colourful ghosts that lurk in every corner trying to eat him- all that in an insane maze. As you can see, the premise is the same but there are some additions that enrich the story, which will be analysed later. What I want to focus on right now is the story behind the "256" in the title. For those of you familiar with the Pac-man original game, this number is not new, and I myself only found out about it recently. 256 or mostly known as Level 256 glitch, is a bug in the original Pac-Man that broke the walls of the 256th level and replaced them with alphanumerics that appeared on the right side of the screen. Taking advantage of the infamous 256 level, the developers of Pac-man 256 incorporated it in their game to create something fresh. Let’s see what that means now, shall we?

Similar to Crossy Road, in PAC-MAN 256 the player must guide Pac-man in an endless maze while constantly having to escape the enemy grip- in this case the ghosts that try to devour him. Not only that, but just like in Crossy Road, in which the eagle is the absolute danger during gameplay, in Pac-man if it takes you too long to advance, then the 256 glitch will appear and start eating the maze from the bottom and if you don’t start moving fast you will be consumed as well.

Ghosts act the same way as in the original version of the game. Once you get near them and they sense your presence they will come after you, or if you end up stumbling on them it’s instant game over. But you can turn from prey to predator in no time by collecting the power pullet that turns them into harmless blue ghosts for a few seconds, in which case you’re the one who will eat them. This rule is the same as in the original game but now there are more than one ways to fight back, and that’s because of the power-ups. Yes, now Pac-man can get power-ups and hunt or slow down ghosts. There is a variety of power-ups in the game, such as the laser, which shoots a laser beam and obliterates any ghost that comes in your way, the Freeze which slows down all ghost movements for you to escape them easily, the Bomb with which you trigger an explosion if you touch a ghost, or the Stealth that helps you escape ghosts that are positioned in difficult to pass spots. There are many more power-ups (over 15) for you to make use of. 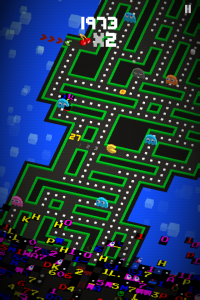 Keep in mind that each power-up lasts only for seconds and in order to make use of them you have to spend 1 Credit before starting a game, and then find and collect them in the maze. Not only that, but you can only select up to 3 power-ups to use in a round and you can upgrade them to make them last longer by spending more Credits. You can play a free game too but that means no power-ups. In PAC-MAN 256, Credits work as the game’s currency, so by spending them you can use power-ups and/or spend one to continue from where you lost the game, but you have this option only once in each round. Credits are not available only inside the maze but you can also collect them as rewards by watching ads or by completing some game goals such as eating an x number of cherries in the maze.

Except for Credits and the iconic Pac-dots that you eat with the familiar “waka waka” sound effect, there are also Fruits (apples, cherries, and more) that work as point multipliers and help you get higher score in a faster way. The same happens when you eat the frozen ghosts. If you manage to eat 256 dots, or reach that score with the multipliers, you are met with a nice surprise but be careful not to put high-scoring ahead of escaping the ghosts. It’s better to sacrifice them to survive than risk Pac-man’s life and lose everything.

As I mentioned earlier you can get yourself more credits by watching ads or completing game objectives. In case you want to have unlimited amount of credits you can purchase them for $7.99 or buy a coin doubler for $4.99. Although the prices are a bit high, there are no tricky IAPs and you can enjoy the game to its fullest even without spending a cent. 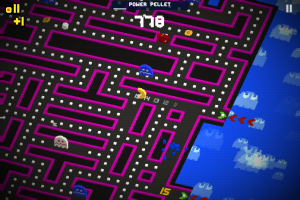 PAC-MAN 256 looks great and that’s to be expected from the people behind Crossy Road which was praised not only for the gameplay but for its looks too. Although the graphics are in 3D, it gives the impression that the characters are in 2D just like the original. The vibrant colors of the characters, multipliers and power-ups break the monotony of the dark-grey maze and every time you reach a certain score, the colors of the maze’s walls change. Normally the game runs at 60 frames per second but there’s an option to lower it to 30 to conserve battery. Also, you can play the game both vertically and horizontally.

The sound effects are the same iconic ones that we know and love, so make sure you play the game with sound on, otherwise you’re missing out on one of the most amazing aspects of the game.

PAC-MAN 256 is a must for lovers of Pac-man or retro games in general, as well as for players who love Crossy Road. The game works smoothly, it respects the original and also includes some innovations to make it more interesting for modern players. IAPs might seem expensive, and truth be told IAPs are never welcome in games, but in PAC-MAN 256 as in many other freemiums, it’s not forceful or annoying. It’s an amazingly well-done game and I suggest you give it a try.

Screenshot above, Gameplay video below