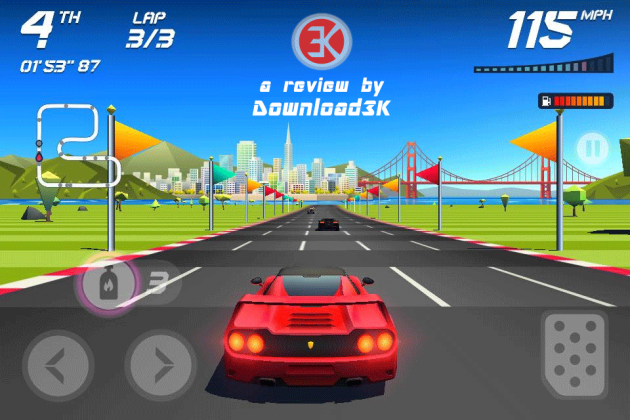 Even though I’m a girl I always had a soft spot for racing games and I would be extremely happy even with a free demo for PC back in the day. I find it extremely relaxing and fun to “drive” a car in racing games, mainly because you can enjoy it without having to follow complicated rules to reach an outcome, and all you have to do is speed up and drive like there’s no tomorrow. Win or lose doesn’t make a difference in these games (at least for me) and the enjoyment lies in the experience. For all these reasons, I was really glad when I was given the opportunity to review Horizon Chase, a racing game that brings you back to the 90s’ classic racing arcades. 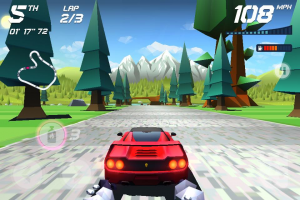 In Horizon Chase you participate in races around the world, with every track looking unique and distinguished from the others. You will come across beautiful sunsets, various weather conditions (rain or snow), and even extreme situations such as volcanic ashes and even severe sandstorms, during night and day to make things more interesting.

The controls are extremely easy to use and respond accurately to the action you want to take without any issues, lagging or difficulty. At the bottom left of the screen there are right/left arrows, and on the right bottom is the brake. Turning left or right has never felt so easy for me in a game app. The car was turning exactly how I wanted it and didn’t make it hard to control its movements. On the contrary, turning was fluid and smooth and didn’t require forceful actions on the controls. I even avoided collisions for the most part, which is a new record for me, simply by releasing the accelerator when getting near other cars or obstacles.

The game offers power-ups to help you finish at the top, such as Nitros that when used allows you to run at full speed, Tokens that increase your score and can be used for unlocking stages and countries (in case you want to use this method as it’s not the main one) and Fuel in order to refill your tank (finishing a race with spare fuel gives you bonus points that can increase your score). All of them are scattered around in every track and you should collect as much as you can if you don’t want to run out of fuel or lose your chance to finish as one of the winners. 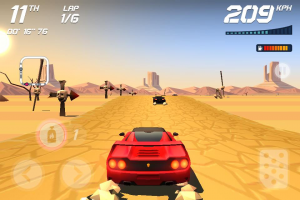 Speaking of winners, in Horizon Chase you compete against 19 other cars (you’re the last in line) and in order to unlock the next track you have to finish among the first 5. The races take place in fairly small tracks and overtaking other cars will seem a bit hard at first but you will get used to it in no time. Achieving a top spot though requires a lot of struggle because anything could go wrong, from running out of fuel, to colliding with other cars and losing speed or losing control of the car altogether. Keeping an eye on the map that appears on the top right of the screen will help a lot with being prepared for sharp turns or oncoming cars. With less opponents or larger tracks things would be less “crowded” but even so the experience is great and memorable.

Every country consists of many cities and in turn the cities consist of 2 or more (usually 3) tracks, and as mentioned earlier each is unlocked only if you finish in the first 5 positions. Completing successfully all tracks in a city rewards you with a cup. A golden cup in every country’s tracks allows you to unlock a new car from the many that are available (16 unlockable cars in total) and each has some qualities that make it useful in specific tracks. Bonus races also give you this reward as well as installing upgrades and are unlocked when you reach the score goals set by every cup, or you could spend Tokens and participate in them without reaching the goals first. The same rules apply for unlocking other countries, as you have to score certain race points on previous tracks or you could spend a large portion of Tokens and progress to the next one. 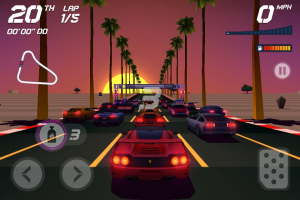 On a side note, I’d like to mention a small feature that I really enjoyed, and that’s the funny phrases that show up in your car every time you pass an opponent, adding some humor and character to the game as it makes you feel like it’s something more than an empty car controlled by you. Another wonderful feature of Horizon Chase is that you can even use an MFi controller to play instead of your touch-screen. You can also connect to FB and race against friends to spice things up and try your skills against real people instead of AI.

Horizon Chase doesn’t include any kind of IAP, and the only purchase the player will need to make is for the game itself which costs only $2.99. 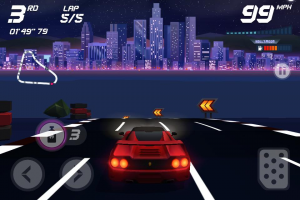 The graphics of Horizon Chase are hands down stunning. I simply love the old-school, retro look that was done on purpose to bring the nostalgia back to the surface and it worked absolutely fantastic in a racing game app. It blends together the 16-bit style with 3D and crystal clear graphics with vibrant colors, as well as detailed environment and car designs. It will be hard not to lose concentration with such beautifully designed cities. The various weather conditions also add a feeling of diversity to the whole racing experience.

The BG music is a masterpiece that takes you back to the 80's and 90's and is composed by the musician behind the soundtracks of classic arcade racing games "Lotus Turbo Challenge", "Top Gear (SNES)" and "Rush", Barry Leitch.

Horizon Chase combines the old-style racing with improved graphics while remaining faithful to the old, 16-bit style and the same amazing gameplay. The result is a racing arcade with high speed and smooth frame rate, beautiful colors and locations, and wonderful soundtrack. It is clear that the developers handled it with great attention and care and brought us a game with a plethora of choices and a satisfactory number of stages. You should definitely give it a try if you’re a fan of racing games, especially in classic arcade form.

A PC port is on its way.

Screenshot above, Trailer below