Home
Articles
Game Review: Mega Run, Immerse in the Magical World of One of the Most Addicting iOS Games

Game Review: Mega Run, Immerse in the Magical World of One of the Most Addicting iOS Games 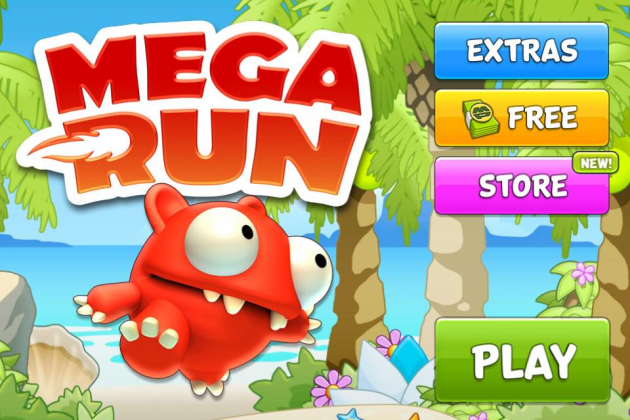 Mega Run - Redford’s Adventure belongs in the category of games that make you feel great for living in the smart-phone era. It's been quite a while since I got so addicted to a game, and fairly so, as it includes everything one might ask for in a game app. Mega Run is the sequel to the successful games Mega Jump and Mega Jump 2 by Get Set Games, and as a successor it most certainly lives up to the expectations of the fans. Although the game came out back in 2012, it caught my eye recently thanks to the most recent update it got, and since then I can’t spent a day without playing it. So, let’s take a look at what Mega Run has to offer, shall we? 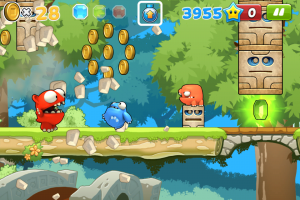 In Mega Run you must help Redford, a cute red monster save his brother and sister that have been kidnapped by a mysterious monster and taken far away! On your quest you will come across a variety of worlds and challenging stages full of amazing adventures. You must find Redford’s lost family by visiting new worlds and following the trail of coins and Gems!

Mega Run is a platformer that even though belongs to the endless-runner genre, it is made in such a way that you hardly notice it. For starters, Mega Run has levels/stages, and that means it has a start and a finishing line. Depending on which World you are, the levels will take place to a different location such as, a pretty forest, a scary forest, a beach, a volcano, a  mountain and more (more Worlds are coming soon).

Although the locations change depending on the World, the objectives and obstacles remain the same. Your task is to collect as many coins as possible (they come in various forms, e.g. the normal coin, the coin with the blue square that is worth 2x, the coin with the red square that is worth 5x and the coin with the > sign that gives you a speed boost) in order to buy stuff from the shop. Apart from coins, the game includes gems that are difficult to collect because they are placed in spots which are relatively hard to reach. Picking up stars is also important as they give you the ability to break through blocks and also double your jumps. Power-ups include magnets for attracting coins, a size magnifiers that increase the size of our hero and can smash his way through obstacles and enemies, rockets that give you power and speed, "save stars" that give you boosts, pull distant gems or save you if you lose in the middle of a stage, and many more. 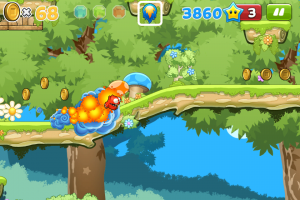 The enemies you come across are monsters similar to Redford, and in order to defeat them you only have to jump on top of them (unless you have a power-up that lets you run them over). In case you get hit by one you lose your balance and fall down. If the only thing under Redford is sky then falling means game over, but if there is solid ground then you can continue the game normally.

To get a perfect score (3 stars) you need to do exceptionally well which is easy on the first few stages but gets harder as you progress. The stages remain the same no matter how many times you visit so by memorizing each obstacle's or item's location, you can get 3 stars after only a few tries.

The controls are simple since all you have to do is tap to jump and tap-and-hold to jump higher. You need to jump at the right moment though, as there are many gaps and devices that move up and down so a wrong step and you experience an epic fall to the unknown.

Moving on to another world requires a certain number of stars so if you’re missing a few you can always replay a few rounds aiming for one or two more stars. Having a perfect score in all levels is not required to collect the necessary number of stars to unlock a new world, so don’t worry about being stuck from moving forward, the fair difficulty levels and simple controls are also your allies in achieving your goal. 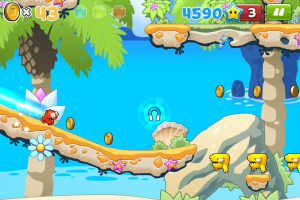 Battle Run’s IAPs focus on power-ups, other characters (each character is unlocked after you reach a certain level), save stars and more, all of which can be bought with the game’s currency- a.k.a. coins and MP. Coins are collected for the game as we mentioned earlier but MP currency is available through IAP in exchange of real money, or by watching game ads every day (something that rewards you with 10 MP every time you do). It’s not hard to raise a fairly big amount without spending any real money. With MP you can also unlock other Worlds too, so I suggest you use them for that reason mainly and not for purchasing items.

Fresh, crystal-clear, beautiful and lively are the words that best describe Mega Run’s graphics. The Worlds look fantastic and the variety in colors and designs in each World doesn’t go unnoticed by the player. In fact, a huge portion of Mega Run’s enjoyment is the feeling of joy that the graphics and designs cause to the player.

The BG music fits the light-hearted atmosphere of the game and I suggest you play it with sound on to have a full experience of the game. The sound effects are also worth-mentioning for their uniqueness.

All in all, Mega Jump is one of the best platformers for those who are looking for something simple, without a deep story or game mechanics, yet intriguing and addicting. It’s not a frustrating game, which is rare for an endless runner, and it doesn’t get boring or repetitive despite the similarity between the Worlds' levels, plus its IAP system is not forceful. There’s hardly anything negative to say about it so give it a try and let us know your thoughts in the comments section below!