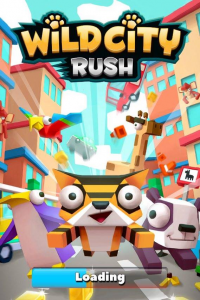 If games like Crossy Road are your cup of tea then you shouldn’t hesitate to play Wild City Rush that generally follows the same routine. The zoo theme is probably the main reason I decided to give this game a try because zoo animals running free is something that I always find fascinating and hilarious in movies and games. Let’s take a look at what WCR developed by Sviper has to offer.

Wild animals find themselves free from their cages and in all the chaos that follows, you need to make sure that they will survive the dangers of the city and escape this new environment. You control the animals by tapping to make a step forward and swipe left and right to change lanes. If you take too long to move and the edge of the screen catches up to you then the helicopter will appear and grab you which in other words mean game over.

The main difficulty of the game is the roads where cars or other runaway animals pass. To cross the road you need to make sure there are no approaching dangers that will result in collisions and hop as fast as you can. Other obstacles in your way will require you to change lanes, which sounds like not much of a deal but it actually slows you down a bit. Collecting coins is also important but don’t risk your life for some of them because leveling-up by clearing a level is more important.

When you progress on the game, e.g. you go on a new level, you are rewarded with a treasure chest that includes various gifts such as lives, coins, and even new animals for you to plays as. Power-ups are also available in-game to help you overcome dangers such as rivers (with the life belt) or run fast (with the dash power-up). There are plenty available and after collecting them they remain in your inventory and you can upgrade them by spending coins. You can also increase your lives by watching game ads. 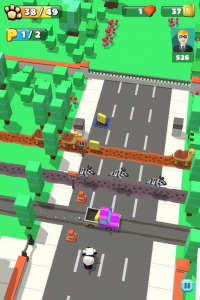 That’s basically all there is to Wild City Rush. Its concept is simple and straightforward, and the rules clear and easy to follow. The ability to change animals is very fun and it is always a surprise to see what character the chest will reveal each time. The panda is for now my favorite of the bunch but I’m sure I’ll find a new favorite sooner or later. It is not unique game but it surely fulfills its purpose.

Similar to most freemiums, Wild City Rush also includes a shop for you to purchase coin bundles in prices that range from $ 0.99 for 8000 coins and can go up to over $ 80 for 1.5m coins. Coins can then be used to purchases lives and treasure chests. The temptation is strong with the lives because they are very limited in-game but other than that coins are easy to collect and use for upgrades.

Appearance-wise the game looks lovely and its 3D designs are simple yet pleasant to look at. The best part is of course the animals and the way each one looks. The colors are vibrant and with a large variety which makes you feel like you watching a moving rainbow. The BG music is cheerful to match the game’s quick pace.

Overall, Wild City Rush is a fairly enjoyable game aiming to relieve you of stress and give you a good way to kill some time with. It’s repetitive in terms of gameplay but as you progress levels become more complicated and power-ups make everything more exciting. If you’ve tried it let us know your thoughts and impressions in the comments below.

Wild City Rush screenshots (above) and trailer (below)