Game Review: Get Ready for a Wonderful Little Pixalated Adventure with Nubs' Adventure! 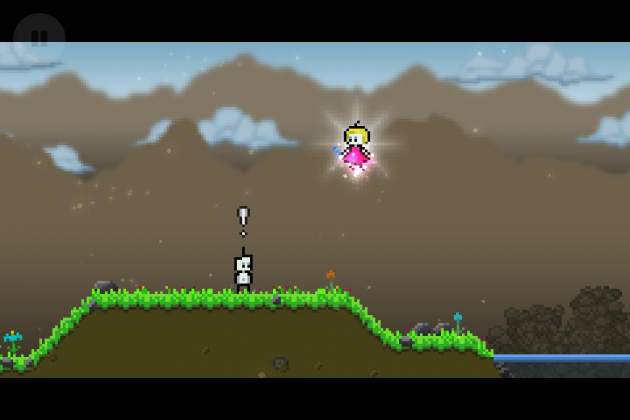 Pixelated game adventures are experiencing a huge boom recently and this led to the development of many types of pixelated games which try to re-create the '90s atmosphere, not only graphically, but also with the use of the corresponding music and even gameplay. I’m quite biased when it comes to such games because of nostalgia, so when I discover a gem among them I play non-stop until I finish it and then try to convert my thoughts into words in order to write a review that will do the game justice.

My most recent pixelated obsession is a newly released game called Nubs' Adventure by Maximilian Csuk. Nub’s Adventure is a 2D exploratory platformer that you will make you feel like you’re playing on your Game Boy Color again. 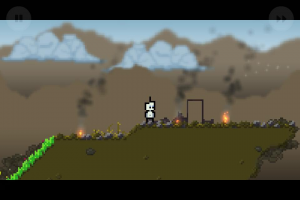 Nubs’ story seems a bit sad at first, even though we forget about this part when the quest begins, as a result of the light-hearted approach it takes towards the injustice done to Nubs. Our hero was leading a poor but peaceful life when suddenly two criminals attacked his home, threw him off a cliff and then burned down his house which was all he got. The good news is that he survived the fall and now with the help of a fairy he wants to rebuilt his house and get his life back.

In Nubs' Adventure the player must control Nubs and get him through various levels in a search for fairy dust necessary to the fairy, who can magically get him his home back. In each level you will encounter dangerous enemies that you can knock out for a few seconds with your boomerang.

Climbing, jumping and swimming are also part of the package and in some cases you will need to think clever to get the fairy dust gems and clear the level. New obstacles start showing up the more you make progress, and gems become harder to get as well. To get them you won’t only control Nubs, but also a giant worm-like creature that despite being dangerous, spares the life of Nubs when he is thrown of the cliff at the beginning of the game, and also helps you gather gems, which would otherwise be impossible to get because of where they’re placed. 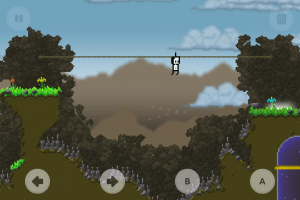 Controlling the snake was the hardest ordeal for me because the left and right buttons took me in the opposite direction of where I wanted to go, sometimes making me miss a gem even if I was a breath away from it, thanks to the controls. Part of the difficulty is that the worm is quick while moving underground but when it reaches the outside world you have almost no control of its movements. It falls back to the ground and you’ll have to try again.

There are over 50 levels in Nubs’ Adventure, and all of them take place in 4 different environments. The most common one is the Grass Valley that consists of lake ponds to swim in (be warned that staying underwater for too long will kill Nubs), hills and mechanical devices you can jump on to, and enemies that look like mechanical spiders.

There’s also the Dark Caves environment where you have a tiny light around you and have to move careful in order to avoid stumbling on danger no matter what form it may take. Then there’s Clouds, where you have to jump very carefully if you don’t want to fall to your death, and last but not least we have the Away environment, which takes place in an alien universe full of deadly traps such as acid water and bombs. As you can see the game doesn’t lack imagination and variety at all; the same can be said about the tricks you’ll need to perform to clear successfully.

Jumping from too high results in the character's death so make sure you jump carefully from one place to the other. Also, when throwing your boomerang wait for it to return to you before moving, because if you move beforehand you will also fall victim of its strike. It happened to me out of nowhere and for a few seconds I just stared at my screen not knowing if I should laugh or facepalm myself. 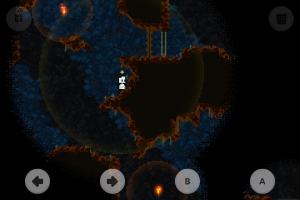 Nubs doesn’t acquire new moves or weapons while you progress and surprisingly this doesn’t make the game boring or repetitive. Your goals each time make up for the lack of power ups. You’ll have to find hidden items, collect all dust shreds necessary to unlock huge gates that block your way, or find symbols to unlock totems for the same reason.

Honestly, these tasks are so engulfing that anything else would just ruin the experience. Some levels are exceptionally hard and you will need to spend more time and thinking than you’d expect but the way out is always there and despite the difficulty it is a fair gameplay.

Of course, with so many dangers around the game wouldn’t be complete without the checkpoints that are present in many parts of each level to make things easier for you and allow you a breath of relief.

Apart from the checkpoints, there are teleporting machines that if activated can take you to a different place chosen by you (as long as there is a teleporting machine on the other side) but you can only visit a place you been in before because the map only shows the places you have cleared before as well as you current position.

Speaking of the map, it’s extremely detailed and useful as it shows anything, from locked doors to collected items so you won’t feel lost or worry you missed something. 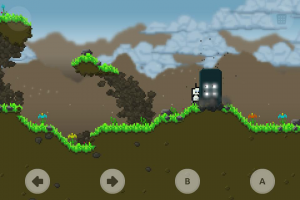 The only purchase for Nubs’ Adventure is unlocking of the full game for $5,00. Upon reaching a certain level you will be asked to purchase the rest of the game if you wish. There are no other purchases, or IAPs to give you an advantage while playing. It all rests in your own abilities.

As a 2D pixelated game you know what to expect in terms of graphics and Nubs' Adventure doesn’t disappoint on this department either. To my surprise the music is calming and melancholic, and not fun as I expected it to be at first.

Nubs' adventure is a great game to spend your time with. It's neither too easy or too hard- it has the perfect balance of difficulty and enjoyment that won’t frustrate or make you feel bored. The lack of IAPs and the option to enjoy a generous portion of the game for free and then decide if you want to continue by unlocking the full game is also a huge plus.