The development company Fizbin wanted to create a classic Point and Click Adventure with puzzles that are challenging and has an exciting story and thus The Inner World was created back in 2013. The Inner World is linear but this is reasonable as it is an adventure game where the main pillar is its story. Each place has a character to talk to and a puzzle to solve. Every time you solve a puzzle, the plot starts being revealed more and we learn a lot about what has happened to Asposia and why our protagonist knows nothing about it. But let's take a closer look at The Inner World.

Asposia is a mysterious world. Against all the laws of physics, Asposia is the center of chaos and aired only by three major wind springs. In this world lives our hero, Robert, a naive and pure young man who grows up in the last monastery of the winds. Having a simple and humble life as a court musician, he lives with his adoptive father, Conroy. But everything changes as one source after another began to under-perform, and the gods of the wind are beginning to turn the Asposia inhabitants into rocks. So suddenly Robert finds himself entangled in various unexpected situations and has to face for the first time the world outside the monastery. Together with the mysterious Laura, his good intentions and without the slightest idea of his actions, Robert will solve the mystery of the disappearance of the winds. He will meet several strange Asposians as well as some strange animals and he will also solve various puzzles that only could exist in this world. 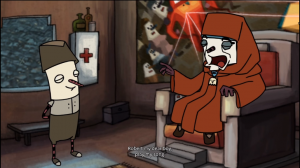 If you're used to Adventure games, Inner World’s puzzles will bring to mind good and bad memories. Most are solved by using the inventory and mixing the various objects you will find on your path. Some of them are pretty difficult and they'll mess with you, but luckily there's a helping hand. There is a notebook that gives you various hints about what you need for any problem that occurs in your quest. I suggest, of course, that you try to solve everything  by yourself and only use hints when you are stuck for good. You do not have to worry about any failures though as you cannot lose.

Controls are the usual and simple. You have a selection key, one for the inventory, one for displaying and one for selecting hotspots, one for Robert's ability, the nose-flare, and finally the use of Help. Browsing inventory as well as collecting items is very simple and easy to use and if you need to combine or control some objects you will not have any problems. It takes around 5 hours to complete the game and you’ll probably have to be patient enough to repeat things until you get them right.

The Inner World is available on PS4, Xbox One, Android, iOS and PC. 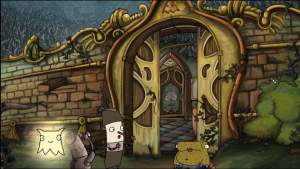 The graphics are good and fit perfectly with the game’s feel, but they are not something unique. The characters are original and have a funny design with Robert and the pigeon stealing the show. Backgrounds are beautiful and with lots of details but animation and lipsync are not at the same level. It does not ruin the whole experience but it could have some improvements.

There is enough dialogue that is both humorous and entertaining, and the actors who lent their voices did a really good job. The music in the background fits perfectly and does not get tiring at all.

The Inner World is a title whose gameplay and story are more than satisfying. Even though it was released back in 2013, it is very enjoyable and fun to play. It's just not for everyone. But if you love adventure games and cartoony designs, you will appreciate its charm. Let us know your thoughts and impressions in the comments below.

Download The Inner World for Android devices here for $3.

Download The Inner World for iOS devices here for $3.

The Inner World screenshots (above) and trailer (below)