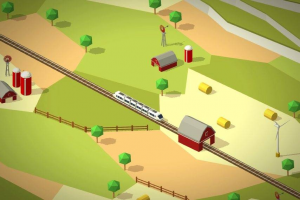 This is the 2nd review about a train conducting game, with the 1st being Train Conductor World, reviewed here. There is something addictive about conducting games even though we know that the premise and general gameplay follows the same rules. Yet, they are always pleasant and fun to keep in your phone and play when you feel like it. Conduct This! is also one of those games that you know from the start you’re going to enjoy. Let’s take a look at what this game has to offer.

Similar to all conducting games, in Conduct This! you are charged with the task of getting the trains safely to their destination, and avoid any collisions with oncoming trains or vehicles. The game is separated in unlockable regions in a map and by completing all levels of a location, allows you to unlock the next. Each region has various levels, each of which ask you to complete a different task and of course the difficulty bar is raised as you advance.

Your actions include changing lanes to take a train to the right station based on its color or in order to avoid a collision, tap on a train to stop it from moving which again is very important unless you want to see destruction before our own eyes, and go the right stations to be able to collect coins during the designated time because there is a timer you have to worry about otherwise the game would be too easy. Needless to say all you have to do is tap either on the train to stop or on the lanes with arrows to change their direction. 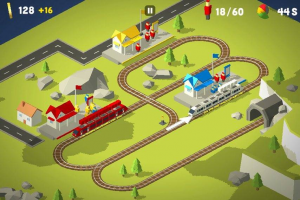 At first things are simple because you only have to worry about one or two trains and the standard vehicle that goes back and forth at the same road (don’t know what’s the deal with this car, perhaps it got lost), but later on the lanes will become more intertwined and confusing and the number of trains will also increase so prepare for a lot of uncontrollable situations. On the bright side, the movements won’t change with each try so you can learn from your previous mistake and do it correctly next time. Despite losing a lot of times, the game didn’t frustrate or annoy me to the least. In fact, it only raised the excitement and enjoyment and I gladly tried over and over and the satisfaction derived from achieving a perfect score at the end made it all worthwhile.

Coins are necessary to unlock a new region so the higher the score on each level, the more coins you are rewarded. Also, you can actually gain from your loses by sharing photos of your collisions to get more coins. It also helps that even when you lose, the coins you collected are still added to your total ammount. With the completion of a region you are given a gift which includes famous trains such as the Japanese Shinkansen and more to make the experience more unique. 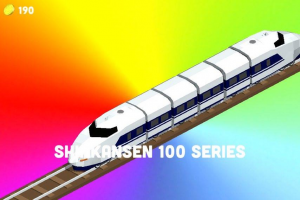 The only available IAPs in the game is the ad remover that costs $ 4.99 and the “unlock all trains and levels” IAP for $ 9.99. Personally, I prefer to unlock everything by playing but if you find it hard to collect the amount of coins necessary and don’t want to replay levels over and over to get enough coins, then unlocking everything via IAP is probably the right choice for you.

The color schemes are simple and the trains very detailed and looking exactly like their real-life equivalents. Everything is fluid with no lags and the soundtrack is also very fitting to the game’s theme and atmosphere.

All in all, Conduct This! is a very fun game, perfect for killing some free time with but it takes a lot of patience and having the right timing to prepare for every move because game over is literally only one step away. If you have tried or plan to try this game, let us know your thoughts and impressions in the comments below.

Conduct This! screenshots (above)