Game Review: Combo Quest 2 takes us on a new adventure 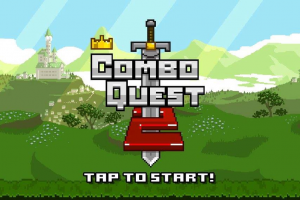 Games taking place during the medieval times are much loved by the players and for good reason. Knights, dragons, wizards, all these figures that appeared in the tales and fantasy books we read are what attract us to this type of games and leaves us asking for more when we complete them. The same can be said about Combo Quest 2, the sequel to the highly successful role-playing RPG that amazed us with its time-tap combat system and exciting fights. Now Tapinator brought it back with more surprises and improvements that old fans will appreciate and new ones will love.

The first Combo Quest game ended with the Knight defeating the mighty dragon and getting back the King’s crown. Now, our hero is back to the kingdom but another mayhem strikes and now he must travel to gather magical heroes, befriend loyal companions, and collect powerful items to save the kingdom and destroy the evil force (a purple dragon this time) that has befallen on it once again. Do you have what it takes to assist the knight against the dangers that await him on his quest? 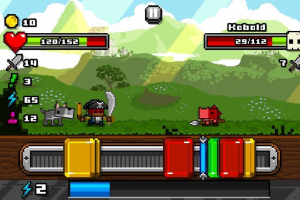 What has made Combo Quest famous is its unique time-tap combat system. If you’re not familiar with the first game, allow me to explain how this works. At the bottom of your screen appears a scale and every time a battle starts, a slider begins moving back and forth. At the same time various blocks will also start appearing, each with a different color and a different purpose. Your job is to tap on your screen the exact moment the slider passes over a block. If you tap in the wrong moment, your character will take damage, so don’t tap repeatedly even if there is a block near.

Now, regarding the meaning of every color, each of them provides the character with a different move. By hitting the yellow blocks, you deal damage to the enemy. By hitting the red blocks you block the enemy’s attacks, and by hitting the green blocks you activate your character’s abilities. Apart from these blocks there are also purple blocks that if hit activate the opponents special attacks, so be careful where you tap. You will also notice that some red blocks will either have a shield symbol a speed symbol or a bomb on them. The shields require multiple hits to break them and the bombs will destroy all blocks present if hit. As you can see, your victory or defeat depend solely on keeping your calm and taping only when it is necessary. Averting your eyes from the screen even for a second could prove to be fatal.

The bigger the combo you achieve the faster the slider will start to move to make things harder for you, but also a big combo gives you the power to activate the characters' greatest move. You will know it is ready for use by watching if the bar under the scale is full and then you slide your finger across the screen to activate it and admire the magnificent result of taking out the enemy in one go. 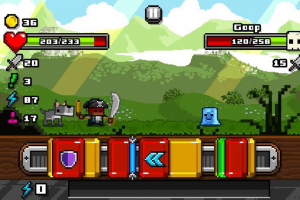 Each level asks you do defeat an x number of opponents with ranging strengths. The easiest ones go first and the closer you get to the end the stronger they get. After defeating one you are offered to choose 1 out of 3 power ups, e.g. max health, max damage, companion power and more. This is very useful because it helps you organize your strategy and use the power up that you believe you are in most need of. Defeated enemies also reward you with health points, power points and more. When you clear a level successfully you earn a treasure chest which could hide a new character (up to 20 unique characters are available), a companion to offer you a helping hand in battles (could be a dog, a robot, a dragon and even stranger ones) gems to purchase items, or new weapons. Treasure chests are probably my favorite part exactly because of the many possibilities. When you have unlocked a few characters you can then choose which one works better for you because the come with different abilities. Upgrading them is also important to increase their strength.

A small complaint is that I can hardly raise my eyes to look at the characters fighting because I have to be focused on the blocks. I only cheat and take a quick glimpse when I don’t have many block showing up but I wish I could do this more. I feel it takes some of the fun from the game. 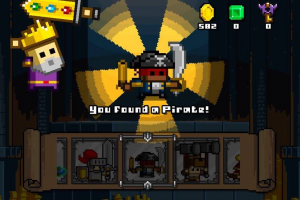 The game’s currency are coins and gems, each of which is necessary in order to improve your weaponry, upgrade your characters and/or unlock new ones without relying on treasure chest and mare luck. The shop is full of gem bundles with prices ranging from $ 1.99 for 125 gems and going up to $ 49.99 for 4950 gems and even $ 99.99 for 11000 gems. That’s quite a lot of gems there and I hope whoever purchases such a large number, has a good reason for doing so. Other than gem bundles the shop offers a Loot Key for unlocking a challenge dungeon but you’ll need to have 500 coins available for doing so. Coins can be purchased through rare currency chests that in turn can be purchased with gems. It might seem like a complicated IAP system, and it is for the new player but it’s easy to get used to after some while. That is, if you plan on buying anything. A small surprise in the shop is the option of watching an ad to be rewarded gems. So even if you’re not a fan of IAPs, give the shop a visit for this option and you won’t regret it.

Combo Quest 2 is a retro game, a beloved trend for many players, with pixalated graphics, cute character designs and matching retro BG music. It is a colorful game with a vast variety of shades. Everything looks beautiful and despite the fast movement of the blocks and the attacks themselves, it is very pleasant on the eyes.

Whether you have played the first game or not, Combo Quest 2 will leave no one unsatisfied. It lives up to the expectations created due to it being a sequel and it will offer hours of fun and excitement for all. Let us know your thoughts and impressions in the comments below.

Combo Quest 2 screenshots (above) and trailer (below)