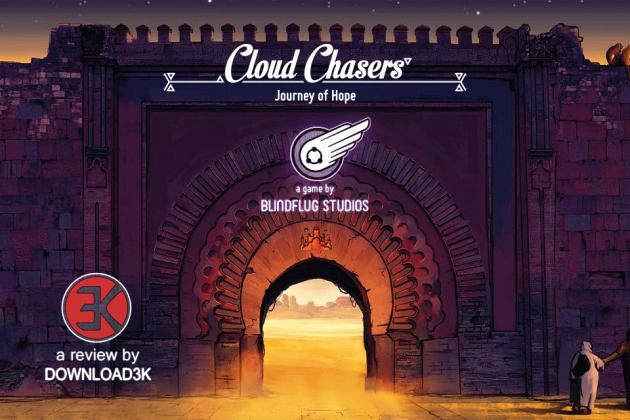 I’m honored to be among the reviewers who have been chosen to try out and review a wonderful game such as Cloud Chasers before its official release. It was a great pleasure to play this game and I enjoyed every second I spent on it. I’m sure it will be highly successful and positively received by players around the globe once it becomes available. It is always a pleasant surprise to see masterpieces being developed by indie game developers and experience a great story and gameplay exactly as the developers imagined it.

Blindflug Studios is an indie game company based in Zurich, Switzerland that was created in 2014. It brought us one of the most famous indie games of 2014, First Strike (read our Download3K review of First Strike here plus an interview with Jeremy Spillmann) which dealt with nuclear war and its consequences, and received multiple awards for its themes and approach. Now they’re back with Cloud Chasers, which through a beautiful gameplay takes on the sensitive theme of immigration and the difficulties that accompany those who begin this hard journey in search of a better future. Similarly to First Strike, Blindflug Studios will once again captivate players with their new release. 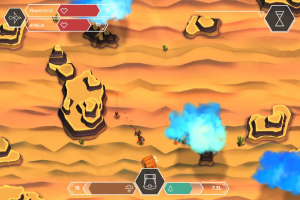 Cloud Chasers tells the story of a father who is a corn farmer (Francisco) and his daughter (Amelia) who must survive in a world where Earth is almost completely dry, and in hopes of a brighter future begin a journey that in 5 different deserts full of dangers in order to reach the Spire- a gate that leads to the artificially floating islands above the clouds where only the privileged are allowed to live.

To survive in the unwelcome environment of the desert, the family uses their glider to fly and harvest water from the remaining clouds in the sky, a task that is not easy mainly because of the special machines called Cloud Harvesters that are sent to collect water and will attack our heroes with no second thought if they get in their way. Coming across other people and learning their tragic stories makes the game even more touching than it already was.

Before setting on your harsh journey, you can go through the tutorial which, needless to say, is very important for the beginner. It will explain everything you need to know and works perfectly with no lagging or bugs. The game starts with Francisco and Amelia leaving their city in search of the “Promised Land”, the Spire. To get them there you’ll have to guide them through 5 different but equally dangerous deserts, aiming always for the city ahead of you. 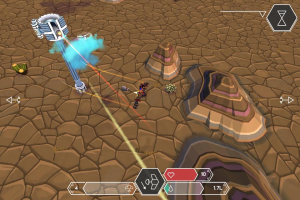 To move the characters all you have to do is tap at any spot and they will move there. You can also move the camera to uncover more space by swiping left or right. I experienced no problem with the scout feature and everything is working smoothly. The characters start off with the maximum water supplies which counts up to 10 liters but although it sounds like a lot, it diminishes very quickly every time the characters start walking, and it's game over if you run out of water. I wish I could explore every event around me but with how quickly the water runs out I only picked the ones that were closer and didn't require lots of walking.

To avoid the cruel fate of dying of thirst, you need to harvest clouds every time you have the chance by getting Amelia on the glider and guiding her on the sky. To begin a harvest you must get the characters near a cloud and the harvest option will appear automatically. Probably the hardest part of the game is controlling the glider. You have to tap and hold either left or right to make it fly to that direction all while trying to avoid hitting on mountains and most of all avoid the harvesting drones that are there to collect the water before you. If you are noticed they will start firing against you and with each hit the glider loses health points. The big one is the most dangerous because if you get too close and collide with it, it will kill you for good so you better look for other, safer clouds. The wind channels that appear here and then will  prevent you from getting close to clouds and you need to find a different route to avoid them. The turrets will also make your goal hard to achieve with their lasers that scan the area and if they notice you they will fire against you. When colliding with a mountain I noticed that depending on the impact it might be hard to regain control immediately and as a result the glider will keep colliding and get more damaged in the process. To land you tap on the button on the bottom center of the screen but make sure you land on solid ground and not a mountain. 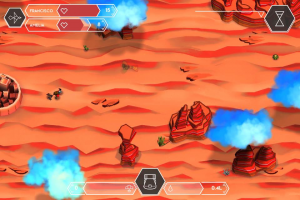 Although the goal is to reach a city, you will come across various events and/or hidden items on your way, such as medication, empty houses, abandoned trucks, other people (friendly and not, or even dead), and on each occasion your choices will decide if the outcome will be in your favor or not. What I mean by that is when you come across an event you are given choices that represent the decisions you need to take. depending on what you choose, the outcome will be different. A variety of items are also usually present on events and you can decide which are worth taking with and which to leave behind. To make things easier for you, the game offers information about each item simply by tapping on them. The collected items are moved to the inventory and from then you can pick which ones will be used on each character (e.g. antidotes or weapons) or for the gliders repairs. You can always discard unnecessary ones or exchange them in the city shops for other items.

Health stats for the characters appear at the top left of the screen and for the glider and water quantities at the bottom center. Certain actions during events can cause your character to lose health points so be prepared to have the required items to restore health if need be. 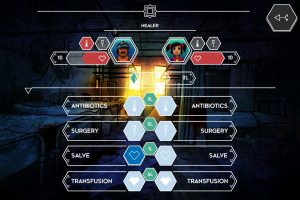 Entering a city allows you to take a breath and visit the Town shop and the Healer before setting on to the next dessert. In the Town shop you can exchange items from your inventory for more useful ones. Keep in mind that the exchange costs you water so only pick the absolute necessary ones. Same goes for the Healer, as you need to spend water to receive a treatment and depending on the seriousness of the treatment it will cost more water.

In the test version I played there were no hints of IAPs used and I highly doubt any will be added by the time of the release. Everything will depend on your skills and strategy, choices and of course careful water and supplies management. 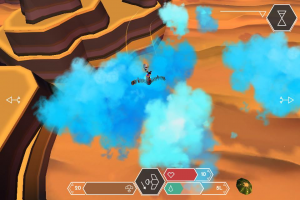 Cloud Chasers impressed from the first moment with their bright tints and crystal-clear graphics in this dystopian world. I especially admired how different each desert looks from one another (with different color patterns and environmental approaches) as well as the contrast between the beautiful blue clouds and the raw colors of the desert, as to show how deadly and pessimistic the latter is compared to the safety and relief that a cloud represents in the game. The character designs are also well made and I love how distinct their characteristics are and how easy it is to feel attached to them not only through their dialog but through their likable but sad faces as well.

Trying out Cloud Chasers has been a great experience and I’m more than glad to have been given this chance. I’m sure that by the time the game is released, the remaining bugs will have been dealt with and players will experience an even more fluid and polished gameplay. It is a very heart-warming and touching game that will make you re-think how difficult it is for some people to survive and their trials in order to make something better with their lives and build a brighter future. It is a lovely game to have, a bit difficult in certain aspects that we analysed earlier, but still enjoyable and fun. If the story and gameplay caters to your game needs then I suggest you consider giving it a try once it is out.

Above: Cloud Chasers - A Journey of Hope Screenshots; Below: Trailer & Gameplay