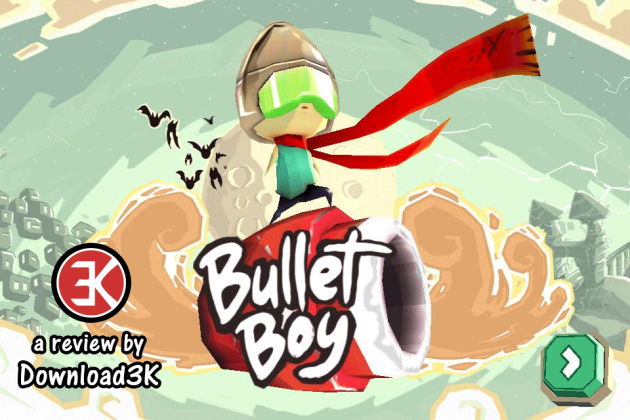 Do you remember watching cartoons where they unlucky main character would be stuck in a cannon and then fired to the sky only to find himself crush on the ground? I always found that hilarious and never got tired of watching these scenes. But although in cartoons these were unfortunate (albeit funny) events for the mc, in Bullet Boy getting fired from the canon is the mc’s main power and the developers behind this game made sure to let the player enjoy this action to the fullest.

Bullet Boy is an an exciting adventure game that takes place in a floating world where our brave hero, Bullet Boy, rushes to escape a deadly tornado, while he tries to collect the missing pieces of some very mysterious and fascinating statues. A large number of obstacles also try to prevent him from fulfilling his task and it’s up to the player to make sure he finishes safely. 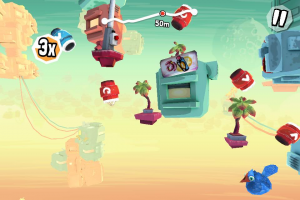 In Bullet Boy the player’s objective is to shoot the hero from one cannon to the other until they reach the finishing line of each level (over 60 levels are available). The levels are fairly small but there is also an Unlimited level where you can test how far you can go without losing. It may sound easy but after the first 2-3 levels things start to take a different turn regarding the difficulty. Although the cannons are static at first and all you have to do is tap to send bullet boy from one to the other without interference, soon you’ll have to aim with precision and with perfect timing, as the cannons will start moving up and down, plus obstacles like walls will also make an appearance and the last thing you want is to collide with one of them.

I know you might be thinking that the general idea sounds a bit like Angry Birds, but apart from the shooting part there’s basically no intersection between these two games. In Angry Birds you can’t be precise with aiming and your purpose is distinguishingly different. 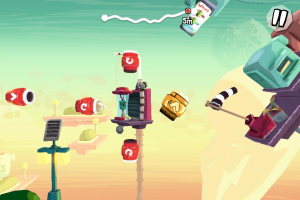 The controls are simple at first as all you have to do is tap at the right moment to fire the cannon but in later levels you’ll have to rotate some cannons to the right angle by holding and swiping. There are also cannons that make things really easy for you as they shoot bullet boy to one another automatically. These cannons are blue and the normal ones red.

As far as the obstacles go, the main danger is the tornado that chases you. If it takes you too long to shoot bullet boy to the next cannon it will catch up to you and it will be hard to escape from it again, so fast and precise moves are the key to avoid it. Apart from it, there are many walls that block your way as well- and by that I mean that if your aim is off, you will collide with one of them and then it is game over for you. Annoying birds will fly between you and the next cannon, making it hard to fire without hitting one. The challenges are many and that’s what makes this game even more addicting.

When you lose you are given the option to continue from where you stopped by spending a heart (you have to spend more if you lose again on the same level). The game provides you with 20 hearts for free and you can also watch a game ad to be rewarded one more. It is a very fair system that keeps you from running out of hearts and thus turning you to the IAPs. Game ads also reward you the drill head helmet which allows you to break your way through walls in case you miss your aim, thus preventing you from losing. 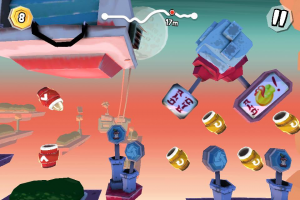 The power ups offered in the game are the Ballistics, which allow you to see where you’re aiming at, the Dive that gives you the ability to move down in the middle of a jump, and the Slow motion that slows down time to help you control your actions better with less stress. To get them you must spend coins that you collect while playing and unfortunately they cost a lot.

And this brings us to the IAPs that exist in Bullet Boy. There are two categories of IAPs with the first being the coin bundles that you can purchases from the store with prices that range from $ 0.99 for 1000 coins to $ 79.99 for the biggest bundle that gives you 250.000 coins. I know it’s overwhelming but Bullet Boy is not the kind of freemium that forces you to buy any in order to be able to advance in the game. The second category is the hearts with prices same as for the coins. With the game ads though and the 20 hearts you are given for free as a beginner, chances are you’re always have a heart to spare. The prices are too high nonetheless though. 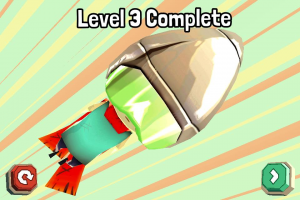 The graphics of Bullet Boy look stunning with lovely 3D designs, lively colors and smooth motion. Bullet Boy himself has a cute design although we don’t see much of him because he’s stuck in a cannon for the most part. It is very pleasant to the eye and the BG music is also fitting with lively melodies.

All in all, Bullet Boy is a game that doesn’t let you get bored and finds the right balance between challenge and fun. The levels are small so as not to make things too hard and the actions you need to perform look difficult only at the beginning. The more you try the easier you will reach the finishing line. Visually it’s also a beautiful game and the IAPs are only there for those who choose to use them and are not obligatory in order to advanced further in-game. Give it a try and let us know what you think in the comments below!