The Kingdom: Classic was developed by independent developers Noio and Licorice with the publishing company Raw Fury. Released in 2015 with positive reviews, and in 2016 it was announced that a new version of Kingdom: New Lands would be released, which would have enriched content while the original game became independent. New Lands is finally here and we couldn't resist playing it.

In Kingdom: New Lands you control a king or queen who wants to create a new kingdom in a different land. The monarch sails to undiscovered lands and brings citizens to help build and defend the new kingdom. Obstacles you will encounter on you way include the Greedy creatures that come from four mysterious gates that you will find in the world and what's unique about them is that their aim is not to kill you or your citizens but to steal the precious coins you have collected and your crown. So if these creatures manage to steal your golden crown and throw it into one of the gates, everything is done for you as you can't be king without a crown. 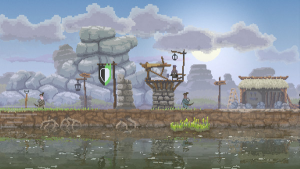 The Kingdom: New Lands will first teach you the basics of how to build your kingdom and how to find new followers and then everything is in your hands. The driving force of your prosperity is the gold coins, which you can find in chests, the prey that your hunters kill and the farms. Since all that are not provided on a stable basis, especially in the early stages of your kingdom, you need to be careful about managing your resources, otherwise you may find yourself defenseless against the Greedling hordes. Initially, their attacks will consist of a handful of Greedlings that will be easily exterminated by your archers. But about every 5 days the moon will turn red and trigger an event called Blood Moon, during which your enemies will choose a side of your base and attack with stronger creatures and with larger numbers.

To defend your kingdom and to claim new lands, you have to assign the corresponding work to your followers. In the forest you will find several camps waiting for various NPCs and you can hire them. Once you have come to your base you will have to buy equipment from each store to determine the role of each follower. For example, if you buy four hammers, four of your followers will become Builders in order to build buildings, repair ruins and handle your catapults. If you buy arcs they will become Archers, the backbone of your defense against Greedys and a basic source of revenue as during the day the archers chase in the forest and in the fields. There are different strategies for how to allocate your followers and it is good to experiment to find the one that suits you best. 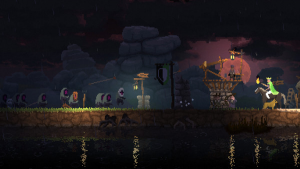 When you create your base you will also unlock the corresponding buildings from which you can buy equipment. In order to expand the boundaries of your kingdom you must send Builders to cut trees to free up space that you can use. You can build Guard Towers on rocks to enhance your defense, walls in hills to prevent the passage of Greedlings and farms to streams to send peasants who will give you more currencies. You have to keep in mind that as the borders of your kingdom extend, the more time consuming you will be to go from one end to the other. This will help you with some gates that can teleport you and are built in the ruins of the gates from which the Greed is born, since you first destroy them with your army.

It is worth mentioning that Kingdom: New Lands has a fairly high degree of difficulty. First of all, the game has Permadeath, which means you can save only when you turn it off and if you lose your crown, you can't continue from a previous moment. There are no second chances, if you lose you will need to start from the beginning with another monarch. As you will need to invest a lot of hours in order to begin learning how each element of gameplay works, you will surely see enough of your kingdoms falling into the hands of Greedlings and the Game Over screen will often appear in front of you. It is important not to give up and continue to try until you find a strategy that will work and bring you the final win. Finally, it's worth mentioning that a playthrough can last many hours, depending on how long you want it to last, and if you want to unlock all achievements it will take you more than 20 hours of gameplay.

Kingdom: New Lands is available on PC, Switch, Xbox One, iOS and Android. The price varies depending on the platform. 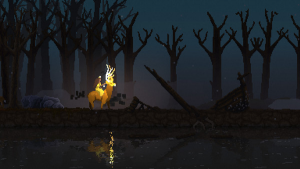 Kingdom: New Lands has pixel art graphics that have been utilized to the fullest. The most typical example is the background in which you will see mountains, hills, plains or rivers as you explore the world while the weather changes daily with rains, storms or sunny days. The soundtrack is great as melodies with medieval influences have been used that match both the atmosphere of a tranquil day, full of exploration and the intense and agonizing moments of a night Blood Moon.

Kingdom: New Lands is a fun experience that will seem difficult to you at first and will force you to experiment and explore to shape your strategy. It will be difficult and probably annoying to see your efforts go to waste when you lose, but the defeats will make you stick with it and try again and again until you can win, while pixel art graphics and great music will be a good reason to continue your fight. Let us know your thoughts and impressions in the comments below.

Kingdom: New Lands screenshots (above) and trailer (below)