Home
Articles
Game Review: After many years Spellforce is back in Spellforce 3 (PC)

Game Review: After many years Spellforce is back in Spellforce 3 (PC)

Spellforce is a series of games that combines two popular genres, strategy and RPG, a mix that definitely sounds interesting. I still remember the first game and I was such a big fan that I even had a poster of it. Now, THQ Nordic and Grimlore Games present us with Spellforce 3, which is a prequel of the previous titles and more promising than them as well. Let's take a closer look and see what it has to offer to the series.

Set in the difficult time of Middle Ages, you plays as a member of Nortander's Royal Guard. Things are not going well for our hero, as after a mission in which he refused to follow orders where he had to murder the innocent inhabitants of a village, he is in the dungeons of the kingdom on the charge of treason. His position is quite difficult and his execution seems inevitable, but the situation changes when Rondar Lacaine, the charismatic leader of Purity of Light, a religious organization that has won the trust of thousands, visits him in his cell. The world is plagued by a powerful plague and according to Lacaine's vision only you can find what caused this plague and stop it. With the power of Lacaine you are set free and start your battle. The game is a prequel, so you don’t have to play the previous Spellforce games to understand the story. 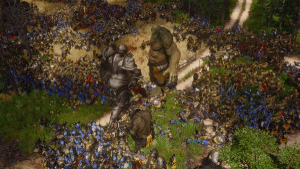 You can select up to 3 members for your group by choosing from characters you recruit during the game. You choose according to the requirements of each mission, but you also choose the appropriate members so that your team feels complete, e.g. you always take a wizard with you that can cure your allies and attack from afar, fighters fighting in the front line of battle and have a great deal of strength and an archer to cover you from a distance. Each fighter has his own special attacks and from loot (that are rather generous) you gain access to new weapons, armor and equipment to upgrade your warriors.

You also need to pay attention to the health of your comanions and help them if they are having a hard time during a battle. By clicking the appropriate button above your enemies you can see their weaknesses and you can choose the right attack. Similarly, by pressing Alt with the cursor on your allies, you can cure them or enhance their attacks. As you hit Alt, time slows down, giving you the opportunity to choose the options calmly. The RPG area of â€‹â€‹the game works nicely, with your team asking for co-operation between its members to deal with the enemies you face. There is also a great deal of text and discussion to better understand the history and the world and a nice variety of sub-missions that you can accomplish if you want.

You will also need to build buildings to collect materials and make warriors, and once you have the right amount of materials, you can upgrade both the buildings and warriors. Although the game comes with a sufficient number of units and the intelligence of the enemies is quite aggressive, there is no ground for using your imagination in battle planning, such as capturing a point or defending another. The strategy is mainly based on the creation of as many and strongest units as possible, and clearing the map by destroying enemies until you reach your ultimate goal, which is usually to destroy the main building of the opposing army. 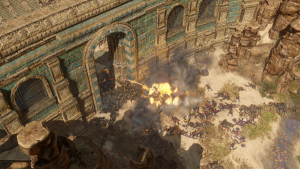 The game also has a multiplayer option with six maps and a campaign mode. When you start an online match you decide on how many heroes each army can have and the amount of raw materials on the map. There are three ways to win: with conquest, meaning the complete destruction of rival units and buildings, with capital destruction, where you have to destroy the main enemy building, and with domination where the player or team with the most points is the winner. As there is little room for strategy, your main goal is to find the perfect combination for the fastest production of units and the full exploitation of your hero's qualities to make it to victory. Each army out of the three you can choose (humans, elves and orcs) has a giant soldier that you create and send to cause havoc to your opponents.

Spellforce 3 is available on PC for $50. 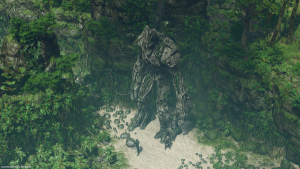 The graphics create a nice atmosphere and while not extraordinary, are very pleasant to the eye. The forests and environments are well-designed, while the most impressive aspect is no other than the cities which will leave you speechless The game also has amazing epic music to accompany your quests. The performances of the voice actors are also top-notch, since they fit perfectly with the characters they play.

If you like RPGs and strategy games, in Spellforce 3 you will find a game that combines both types in a successful way. Despite the rather high price, it is worth the purchase if its your cup of tea. Let us know your thoughts and impressions in the comments below.

Spellforce 3 screenshots (above) and trailer (below)