Although the first Nier game came out several years ago, it didn't become popular until long after its release. The reason for that can be found in its out of the ordinary, peculiar and extremely interesting story. Nier: Automata is the successor of Nier that encompasses all the positive elements and aspects of the first game, and it is also enriched with gameplay improvements and an overall better result. Let’s take a look at this new phenomenon that took everyone by surprise.

Playing the first game beforehand is optional as Nier: Automata is autonomous and independent of the events of Nier, even though it takes place in the same universe. The game takes you on a journey to a dystopian future in which the world has been conquered by robots and the few remaining humans have colonized the moon in order to protect themselves from the machines’ attacks. Now, humanity’s only hope is the androids they created in order to reclaim their world. The main characters of the game are two androids, 2B and 9S, who are fighting together for the salvation of the world, mainly following orders from the Yorha organization which is behind their creation. Apart from the action, the game touches on many philosophical matters regarding humanity and its choises, which make it stand out. Questions such as the possibility of emotional intelligence of the machines, the place of humans in the world, the endless cycle of life and more, will follow the player throughout the game. 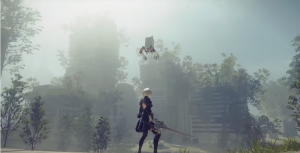 In order  to be able to understand and appreciate every detail the story has to offer, you’ll have to play the game from the beginning to the end three times and see 5 different endings (they are 26 in total but only 5 of them can be concidered proper endings) through which the whole story unfolds. In the first playthrough you control 2B and 9S is only a supporting character, while in the second playthrough you play as 9S, and 2B is your support. During these two scenarios you’re mostly repeating the same sequences with some changes. On the third playthrough though, you play as a new, third character A2 that you have met in the previous playthroughs. You will also be able to unlock new missions in different regions, and you will encounter new enemies and different bosses. I understand that for some of you the thought of having to play a game 3 times is not very appealing, but Nier: Automata is such an addicting and enjoyable game that will give you no second thoughts once you dive into its universe.

Nier: Automata is a third person action game that moves from a side-scrolling platformer, to a side-scrolling shooter, and more, which leaves no room for repetition and gives a breath of fresh air to the gameplay. Nier: Automata's battle system is overwhelming, the battles are beautiful, the movements have the necessary fluidity, and melee weapon combos are highly impressive in their execution. You can defeat enemies by using both hand-to-hand combat weapons (e.g. sword, javelin, hammer etc.), while at the same time, with the help of the pod above your head, you can attack from a distance. 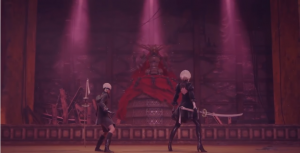 You are also given the option of adding microchips to your characters that work as power-ups and can give you extra life, can make the pod stronger, can make you faster, can cause more damage with melee weapons etc. The ports on which you stack the microchips are limited, so you have to choose which of the microchips that you find you need the most.

The boss battles are overwhelming and the rhythm in these fights is frantic, with your moves demanding perfect synchronization. The changing angles in which the action is transported from the ground into the air which forces you to change the way you attack from close to distant range. I enjoyed this a lot because it increased the excitement and made the battles more challenging.

The level design is not perfect but I had no issues with it nor was I affected negatively by the “invisible walls” that exist in the game. I personally prefer to by guided by the game than feeling lost, but I understand that this could be an issue for some of you. Other than that, everything works and looks great and there are very few things to be criticized under a negative light. The PC version of the game has issues (e.g. crushes, and other bugs in performance) that have been adressed and perhaps you'd like to wait for the Patch before purchasing it.

Nier: Automata is available for PC and PS4. 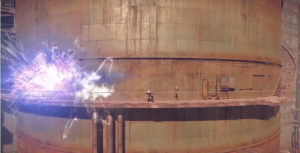 Visually the game is a piece of art, with extremely well-designed characters, enemies and bosses and a matching color palette that reflects the dystopian world of the game. The textures could look better but this is a minor issue when comperated to the whole look of the game. The music is top-notch and I had my speakers on loud through the whole adventure. The OST is amazing, with melancholic tunes in normal situations and dynamic tracks during battles with enemies and bosses. I honestly considered buying the whole OST as I fell in love with it instantly.

Nier: Automata is a rare gem that offers a fresh experience, especially if you feel fed up by the usual games that are recycling the same themes. Obviously, similar to most games, it is not for everyone as its style and many playthroughs doesn’t cater to what every player needs. But those of you who like to try and experience intriguing games, will not be disappointed.

Nier: Automata screenshots (above) and trailer (below)