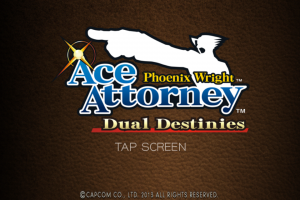 If you own a Nintendo 3DS then chances are you’re familiar with the Ace Attorney series, or better yet, you’ve played it at some point. Ace Attorney - Dual Destinies is the 2nd port on iOS devices, with the first one being the Ace Attorney: Phoenix Wright Trilogy HD that was released two years ago.

Although Ace Attorney DD was released a few months back, I only came around to playing it recently because it is the type of game that you need to spend time and focus on, since distractions will not only make the game more difficult but they will also not allow you to enjoy it to its fullest. Undeniably, this newest installment is much better than the previous one and leaves little to be desired.

As with most CAPCOM ports, the 1st episode is offered for free and you can purchase the rest 4 separately ($4.99 each) or as a set ($14.99) + a special episode. It might seems a lot but we’re talking about a full 3DS game being brought on iOS exactly as is. 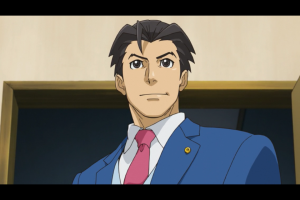 Ace Attorney is a game series of courtroom comedy dramas centered around the main character Phoenix Wright and his quest on becoming a great defense attorney. In Dual Destinies, the seventh title in the series, Wright and his two other lawyers, Athena and Apollo (Apollo Justice was the main character in a previous installment) are taking on their most exciting and intense cases yet. Each lawyer has his own "special power" that gives them the edge in court and also serves to add unique gameplay mechanics. They are all also very well designed and it wouldn't be surprising if an anime series of their own was released.

DD’s story takes place in the “Dark Age of Law” that begun in the Apollo Justice games and continues in this one. The game begins with a gorgeous anime cinematic that shows the game’s characters and leads up to the first case. In this first case (or episode) named “Turnabout Countdown” you must defend and prove the innocence of a young lady who is a accused of setting a bomb in court. 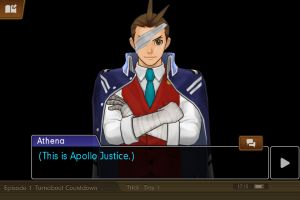 Just like in all Ace Attorney games, you are presented evidence for the trials that are stored at the “court record” that is at the top right of your screen. The evidence come with details and photos that will help you prove your client’s innocence.  In “cross-examination” you examine witness testimonies and compare it against evidence for inconsistencies, thus proving the witness’s lies. Cross examination works like this:

Also, if things are difficult you can tap on the “consult” panel to get help from the character that is helping you in court.

A new interesting addition to Dual Destinies is a guessing game in which you can see the emotions of the client and help them balance their feelings and give the right testimony. 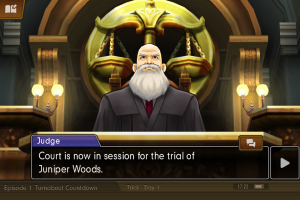 Apart from the court scenes, which are the most important and occupy most of the game, you will also investigate various locations that are connected to each case (e.g. the murder scenes and many other areas) in order to find clues.

The characters are the same as in the previous games, with the lovely addition of the sidekick Athena Cykes, who brings a different charm in the game with her funny character her ability to read the emotions of witnesses, as mentioned above.

What I really love about the game is the character development and the backstories we are given. Although it is based a lot in humor, yet the game has some graphic scenes with blood and violence, such as the victims, or Athena’s scary memories from her childhood.

Since this is a port from 3DS you can save your progress at any point you want by tapping on the book icon at the top left. 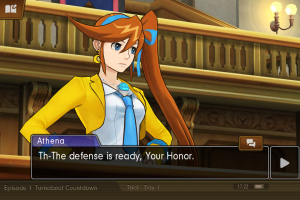 What really bothers me in such games is that there is a lot of dialog, and when I say a lot, I mean more than you can handle. The dialogs are fun, interesting and important to win the cases but it gets too tiring to read all that and sometimes you can even miss some parts. What’s worse, you can't make the dialogs go faster but instead you have to wait for each phrase to finish before being able to click next. Dual Destinies expects the player to read a lot and keep track of tiny details, but to keep speed-readers happy the dialogue can be tapped through quite quickly, and you can always scroll back through the court record for anything you may have missed. If  you hate lengthy dialogs maybe you should stay away from it, and from all similar games.

Also, because this is the 7th game in the Ace Attorney series, as we mentioned earlier, there are many things that are considered known to the player and because of that a new player will not understand some references to past events or important details regarding the characters, nor will they be able to tell the cameos that will take place. But this is easily corrected by playing the 1st iOS games or by a quick search online. The game is easily enjoyed by newcomers nonetheless. Each case is unique and none is directly connected to a previous game so you can play with no worry. 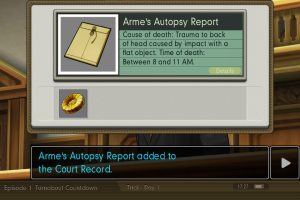 The original game dates back to Game Boy Advance and as such the art was hand-drawn. Fast-forward to today and all animations are HD and fully 3D character models. With gorgeous anime cinematics and fully dubbed. You can watch the cinematics that you unlocked as many times as you desire from the main menu. The voice acting and music is really well done and, as with the rest of the Phoenix Wright series, the localization is top-notch.

The music is amazing as well with its own unique soundtrack and sound effects.

Ace Attorney - Dual Destinies is an amazing game that is worth your time, money and the overheating of your phone during play. It is by no means based on realistic court cases nor it has the seriousness of lawyer tv shows but why would we need that on a game? The cases are interesting, that characters likable and cool, the graphics top-notch and on top of it all it is a port that is given in a lower price than its 3DS equivalent. I won’t deny that I’m a sucker for anime, manga and Japanese games but Ace Attorney, especially DD is a game that won’t disappoint.