Data compression is becoming a popular feature for tech-savvy users who want to do everything they can to speed up their internet experience. In the case of the Opera web browser, their Turbo feature already compresses web site data before it is transmitted across the internet to your location. This reduces the bandwidth usage and can help speed up web browsing especially when the web host is on the other side of the planet.

Data Compression with Chrome for Android

With Google they've been working on the idea of data compression for web browsers for a while. The initial proxy implementation was released at start of 2014. They have since updated the stable release of Google Chrome for Android to include a "Reduce data usage" feature within the settings which it turned on by default. This can help to reduce the bandwidth used. 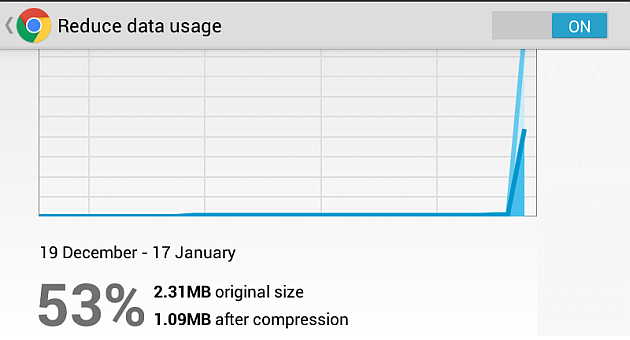 Only web pages that are not encrypted using SSL and https:// in the web link will use the Reduce data usage feature. Additionally, when browsing using the Incognito mode then the feature is turned off for that window.

Here is how you can turn on the "Reduce data usage" feature if it is not already turned on for you:

Data savings depend on the types of pages being viewed, how much text, how many photos, and what on-the-fly compression was possible.

Data Compression with Chrome for iOS 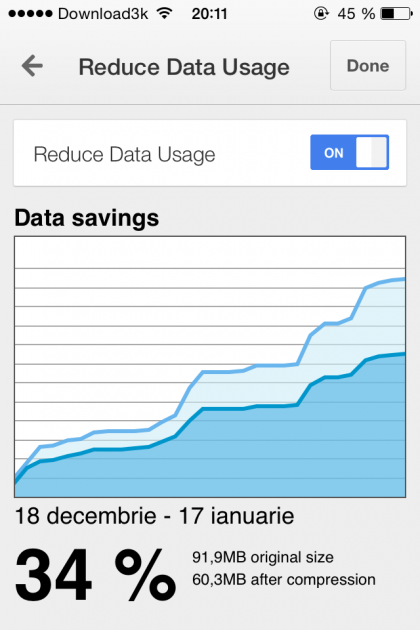 iOS also has a couple of useful features. The first is the same Reduce data usage feature with a similar slider that needs to moved to the ON position. There is also the additional choice to Preload pages and whether to do so over a cellular or only on a Wi-Fi connection.

For users on the desktop then there is not currently an implementation of the Reduce data usage feature that is present for the mobile apps. However, there is a third party unofficial experimental Chrome data compression extension (reviewed before) which can be used instead. This extension also uses the Google proxy but it does via its own third party coding to implement the feature.

This Chrome extension has recently been updated to include ad blocking similar to AdBlock.

The latest version of this third party data compression proxy Chrome extension adds advertising blocking to its list of features. The extension has an area to enter the domains to actively block advertising which includes the use of wildcards and pattern-matching. These follow the AdBlock rules for formatting which are linked to, for reference, above the box. There is also the option to intentionally bypass certain domains with blocking. A time-out box also can suspend the redirection of traffic briefly.

The second change is a new statistics feature which details information about original and compressed traffic bandwidth with percentage savings and a bandwidth chart below.

Not Compatible With a Virtual Private Network

It is unlikely that the Google data compression feature will be compatible with a virtual private network (VPN) account because traffic is privately encrypted and redirected when using a VPN.

Traffic Will Be Rerouted 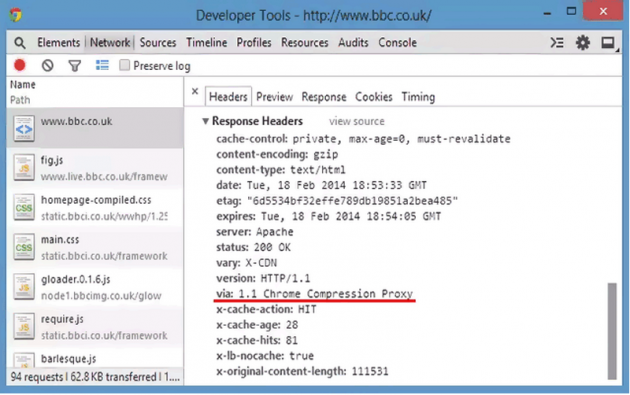 The approach reroutes all non-encrypted (non-SSL, non-https) traffic over to the Google proxy. It is important to bear in mind that while things should be safe from a security perspective, only a thorough view of the Chrome extension's code base would determine if any “funny business” is going on.

So far the reviews have been mostly positive, but this remains a beta feature and could go wrong at any time with the need to disable the extension, at a minimum, should the data compression feature start to act up unexpectedly. 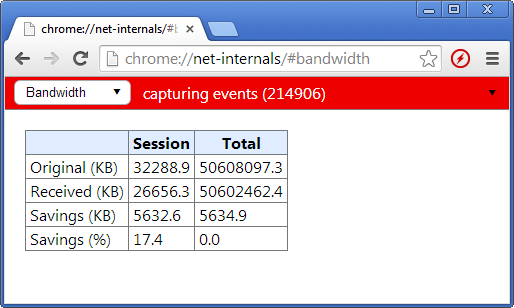 The main reason to consider using this feature is the reduction in bandwidth which can help keep a user within their monthly bandwidth limit on mobile- and land-based accounts. The web site data is compression using lossless compression techniques to ensure the web pages will look the same once they are uncompressed upon arrival to the user's computer.

In tests, the Google data compression proxy will reduce bandwidth use by 35-65 percent which is pretty significant. Content that has many photos are likely to benefit from some of the best compression rates of all. Therefore, the reduction in data transfer and the resulting web browsing speed improvement will vary from page to page depending on the content type.