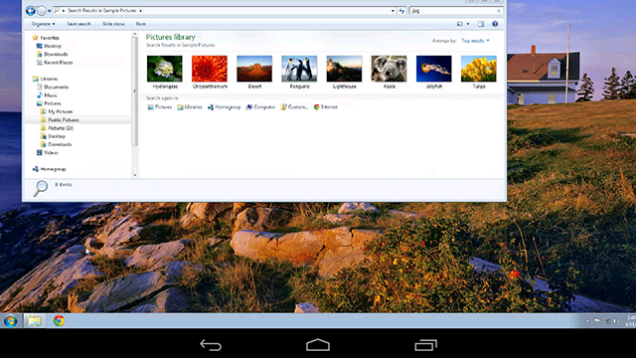 Google has just released Android app to match its Chrome-based Remote Desktop application. Once you install the Remote Desktop extension for Chrome browser, you will be able to log into your computer from your Android device remotely.

Chrome Remote Desktop service was first launched in 2011, and it took Google 3 years to launch a mobile counterpart, but it’s better late than never. The iOS app is said to be scheduled for release later this year.

It is free of charge and doesn't require a lot of effort on your part to set up, so now you can easily access your PC running Windows or Linux, Chromebook or Mac from your Android smartphone or tablet.

First, you will have to download and install a Chrome extension for your desktop Chrome browser. Once you install the extension you can easily connect to your computer or multiple computers from your Android device.

Chrome Remote Desktop has significant advantages, if compared to its counterparts, because it is completely free and is easy in set up. The only disadvantage here is you need to be running Android KitKat, which hasn't rolled out to all devices, yet.

Google is working actively in the direction of connecting your desktop computers to your other devices, particularly Android- powered. In 2013, Hangouts app got a Remote Desktop feature while Chromecast dongle displays Chrome browser tabs on your TV. Besides Google, other companies have also released similar applications, for example, Microsoft launched Remote Desktop application in Windows 8, releasing iOS and Android apps in 2013.