Apple and Nike Will Be Teaming Up in Wearable Tech Again 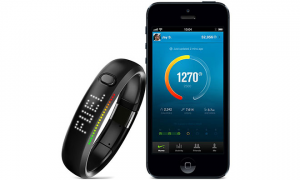 Statements from Nike's CEO Mark Parker to Bloomberg TV indicate that the company is once again partnering with Apple to create a new type of wearable wristband that will emphasize style, stealth, and superior compatibility with existing devices. Nike is certainly not new to the wearable tech industry, as they originally partnered with Apple back in 2006 to create the Nike+ running sensor.

Earlier this year in April, Nike discontinued its line of fitness-tracking FuelBand bracelets and fired the majority of its 70-person crew that worked in that department. This caused some tech sites to erroneously report that Nike is going to completely stop making wearable hardware, which obviously turned out to be a premature assumption now that the company is once again working with Apple on what will probably turn out to be its best wearable yet.

Many of us were surprised to see Nike let go of the FuelBand division only a few months after the launch of the second-generation FuelBand. According to company spokespeople, they discontinued the line to place more focus on existing fitness wearables and to promote Nike+ services and software.

In an interview with Bloomberg TV, Parker emphasized the importance of giving the new wearable a sleek and stylish form that will easily integrate with existing accessories and devices, unlike many other existing wearables that require pairing with proprietary devices (like the Samsung Gear pairing with the Samsung Galaxy). He also discussed Nike's past relationship with Apple, reiterating that he had worked with Steve Jobs himself, and pointing out that having Apple's CEO Tim Cook on the Nike board of directors is a huge advantage.

Parker also stated that the company's plan is to expand the entire digital frontier in regard to wearables, with the goal of going from 25 million Nike+ users to hundreds of millions. It is likely that the number of wearable users will increase dramatically during the next decade regardless of the marketing efforts of Nike or any other company, as consumers seem to be always willing to adopt the latest and greatest innovations from major manufacturers.

Nike's re-entry into the field is certainly not surprising, as a number of other manufacturers in the industry have recently been rolling out their latest additions to the burgeoning industry. Earlier this year Amazon launched a wearable tech department in its web store, showcasing the most popular wearables on the market. Samsung recently revealed the Gear S, LG is expected to make the G Watch R available for purchase in the UK tomorrow, and of course there are plenty of rumors online about the upcoming iWatch from Apple.

Here's Bloomberg TV's interview with Nike CEO Mark Parker regarding his outlook on the company's relationship with Apple:

#news #apple #wearables
Comments (0)
< PREVIOUS ARTICLE
Will There Be a Windows 9? - Why Microsoft Skipped to Windows 10 Instead
NEXT ARTICLE >
What is Windows.old folder and how to delete it