Home
Articles
Apple Losing its Market Share in the US, Europe and China

Apple Losing its Market Share in the US, Europe and China

According to a report from Kantar’s research company, Apple’s iOS is losing its market share, which seems to be gained by Android instead. Europe, US and China are the markets that this drop is observed.

Although the losses are not extremely huge, the case is remarkable since it indicates that Apple is having difficulties keeping its expansion rate that it had when the iPhone 6 hit the market- that is, its first device that adapted to the “large display” trend. 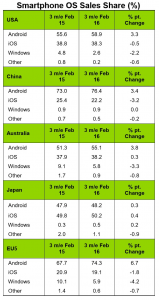 Kantar’s report is based on data that was collected on a three-month period, which ended on February 2016 and is now being compared to the same period in 2015. China is the main reason for Apple’s losses, where it is estimated that they lost 3.2 market share points. On the other hand, Android gained 3.4 points, reaching 76.4%. The company estimates that this is the first time since August 2014 that Apple loses market shares in China. The most affordable iPhone SE, which was recently announced, could help Apple in China’s market, where premium devices have a small share nonetheless.

In a few words, Kantar’s research shows that Android is winning market shares at the expense of iOS and Windows Phone.