Today AT&T announced that they plan on building ultra high-speed fiber broadband networks in 21 metropolitan areas. The company has already begun discussing the plans with 100 different municipalities to bring incredibly fast internet at affordable prices in the following areas: 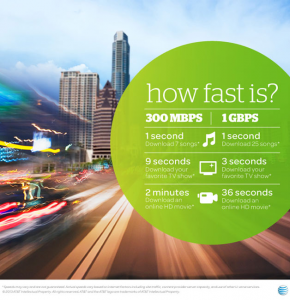 So just how fast is this “ultra” high-speed internet? U-Verse GigaPower customers will be able to download 1 gigabyte of data per second (1Gbps). To put that into perspective - that is about 25 high-quality MP3 songs, in just one second.

Perhaps even more exciting is the fact that AT&T will apparently be giving the service a very reasonable pricing structure, with plans starting at about $70 – similar to plans already offered by Google's Fiber network. Still, it is likely that the exact prices will vary in each market.

U-Verse with GigaPower is already active in Austin, TX, at the aforementioned price, but the service currently provides speeds of only 300 megabits per second – Austin is expected to be upgraded to the full 1GB per second by late 2014 and by then Dallas and Houston should be a part of the network as well.

AT&T U-Verse GigaPower Vs. Google Fiber – Which One is Coming to a City Near You?

So if Google doesn't add at least 7 more cities to the Google Fiber network by the time AT&T has deployed its U-Verse GigaPower network into the planned 21 metro areas then we'll be seeing AT&T having a larger ultra high-speed network area as we enter 2015.

Don't announce the winner yet though, as Google has not exactly stopped building their network; they announced earlier this year that they plan on bringing Google Fiber to 34 more cities.

Surprisingly, Google allegedly hasn't even expressed interest in some of the major metro areas in which AT&T plans to launch their fiber network, including Miami, Houston, San Francisco, Los Angeles, Cleveland, and Chicago. Those are all cities that will probably have AT&T U-Verse GigaPower before they get Google Fiber.

Are AT&T and Google the Only Companies Building Fiber Networks?

Although AT&T representatives have stated that their network is not merely a competitive effort in response to the Google Fiber network, it is apparent that the two will be competing because Google was the first company to announce plans to bring fiber broadband to major cities back in 2010.

Google has openly stated that their fiber network will probably become a highly profitable business, so a lot of experts feel that AT&T's decision to enter the industry has been largely profit-driven.

Before Google Fiber there were already networks that were capable of delivering speeds of 1 gigabyte per second (i.e. - Verizon's Fios network), but these services were not yet made available or affordable to the average consumer.

So Google (and now AT&T) have really paved the way for everyone to enjoy faster web browsing and downloading. Still, it seems likely that Verizon and other telecommunications giants will strive to offer a similar service in the near future.