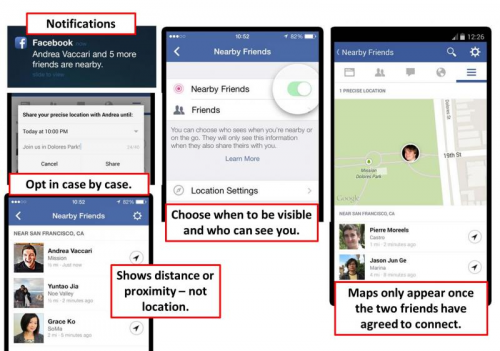 Facebook is implementing a new feature that will give users the ability to track the GPS location of their friends. The 'Nearby Friends' feature will be released in an update of the Facebook apps for Android and iOS within the next couple weeks, and will let you view the GPS location of any of your friends that are connected to Facebook through a mobile device. However, you'll only be able to see the location of friends who have opted to share their location with you through the 'Nearby Friends' feature.

While many critics have been quick to point the finger at Facebook for seemingly encroaching further on the privacy of its users, Facebook and its proponents contend that this is an opt-in only feature, so nobody's location information is being shared without their consent.

So what would be the best use for the new 'Nearby Friends' feature? Facebook representatives have stated that the service could be useful in helping friends mutually connect and meet up before, during, and after social events like concerts, going to the movies, dining at restaurants, or even getting together for a date.

Although the ability to instantly see when a friend is out of town may seem like an even bigger privacy concern, Facebook believes this could be useful in helping friends recommend attractions and destinations or to keep families in touch with each other. Furthermore, disabling the feature is easy to do and you'll always have control over which friends can access your location information.

Facebook has been reassuring its users that there is no possibility of someone seeing their location without their permission, because in order for two people to see each other's location through the 'Nearby Friends' feature they must both turn on the location-sharing option and pre-select the specific friend or friend groups with whom they'd like to share their location.

Facebook, Instagram and other services have been offering a similar feature, allowing users to “check-in” at specific “check-in spots” and broadcast their location to a group of friends. However, the new feature incorporates live GPS tracking using the real-time information streamed from your mobile device, so you won't have to manually check in. When enabled, the 'Nearby Friends' feature provides a moving snapshot of your Facebook profile picture wherever you go, but only to the friends you've specified.

Experts warn that users should be careful about how liberal they are with their location information on their mobile device and always double-check and be selective about who is able to track this data in real time. Preferably, this feature should only be used on an ongoing basis when it is being used as a mutually beneficial tool amongst close friends, acquaintances, or family members.