How would you feel if you had to take a photo of an object so that you could shut off your alarm, or if you could view various details regarding your sleep each morning? In this guide you can find the nine most innovative applications for a mobile alarm which will surely attract your interest.

With a simple search on Google Play you can find thousands of applications for an alarm clock. This is expected though, since their development is not particularly difficult. But what is the feature that makes these nine applications different between each other?

Unlike other types of applications, alarms don’t have anything to do with file management. As a result, there is greater freedom of choice. The only thing you should note is their speed, and permissions asked. Based on this "freedom", this article includes nine applications based on their originality and unique characteristics. This means that it may be missing some conventional apps that do not have a particular function, regardless of their popularity.

In this section we will go through alarm clock apps which force you to wake up. Through special quizzes and other methods, they prevent you from snoozing and basically don’t let you sleep unless you wake up…

Alarm Clock Xtreme and Timer is one of the most famous alarm clock apps in Google Play, with over 10 million downloads and 780,000 reviews. Although there are some negative comments regarding the ads, the vast majority of the reviews are positive, with an average of 4.5/5 stars.

The first thing that makes an impression in this app is its simple and fully functional interface. The theme consists mainly of dark colors that are not tiring for the eyes, while the icons are well-designed. 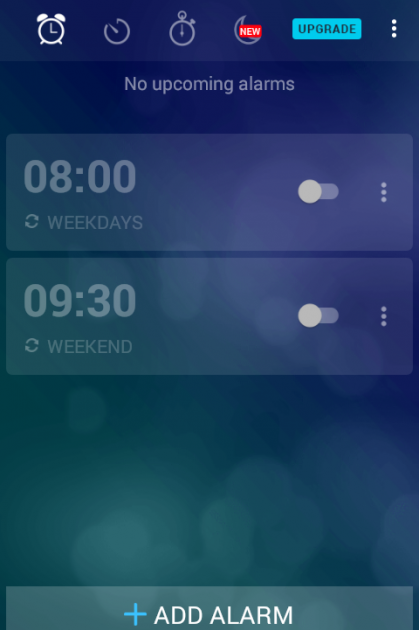 Regarding its functionality, it has all the basic features of a simple alarm clock, with some more specific options and settings. For example, it is not limited to a simple selection for an alarm sound, but allows for a completely random audio file locate in your device. This is useful so that you don’t get used to a sound, and end up not paying attention to it after some time.

The volume of the alarm can be set to a constant level, or it could increase gradually. According to the application, a gradual increase provides a more natural awakening.

As for snoozing, you are provided three options: snooze with the press of a button, with a shake of the device, or by solving mathematical operations. The number of times you can snooze are indefinite, or can be fixed. Mathematical operations include five different difficulty levels. 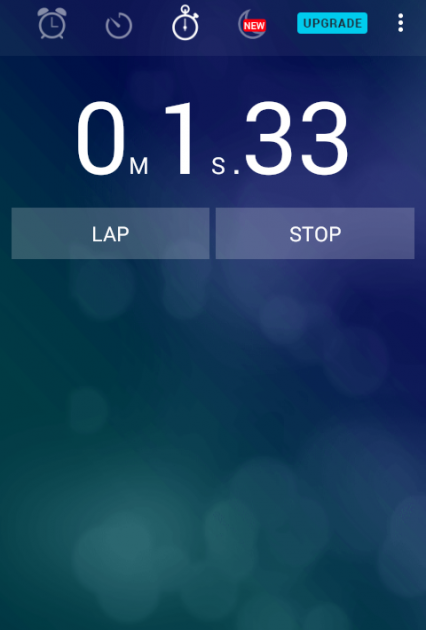 Finally, it also has a timer and countdown feature, as any alarm clock app.

Alarmy is quite similar to Alarm Clock Xtreme and Timer. However, it also provides the ability to turn it off by taking a photo, plus it can display the news and weather. 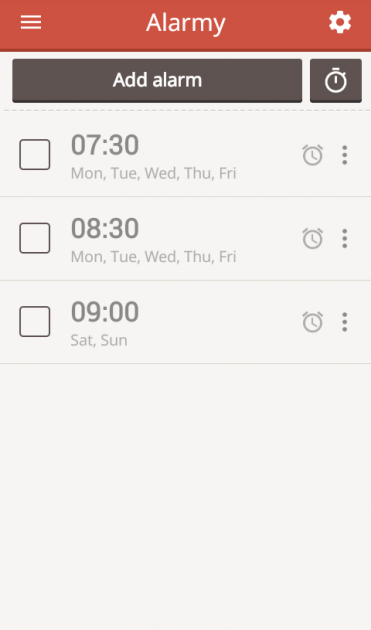 Its photo feature allows you to snooze or turn off the alarm by taking a particular photo that you are asked. Apart from taking photos, you can also select a more common method such as touch-screen or mathematical operations. 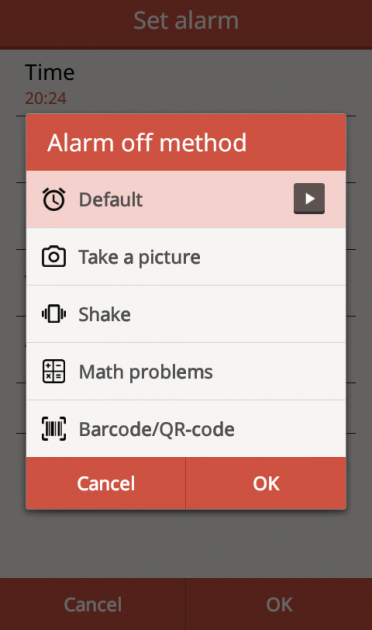 Every time you dismiss the alarm, the local weather will be displayed, along with an option to view the latest news as well. The location tracking is done automatically.

Although Mimicker was created by Microsoft, it is not particularly popular. Its downloads do not exceed 500.000, while its ratings are relatively low (4.2/5 stars). 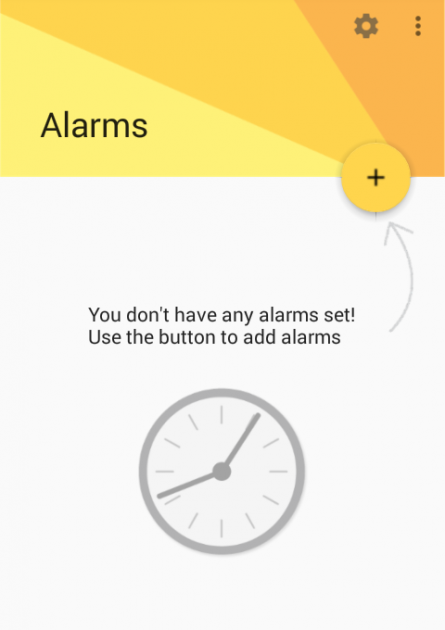 The main feature of this app is its 3 unique methods of deactivation. These include taking a selfie, taking a photo of something with a particular color, or repeating a tongue twister. 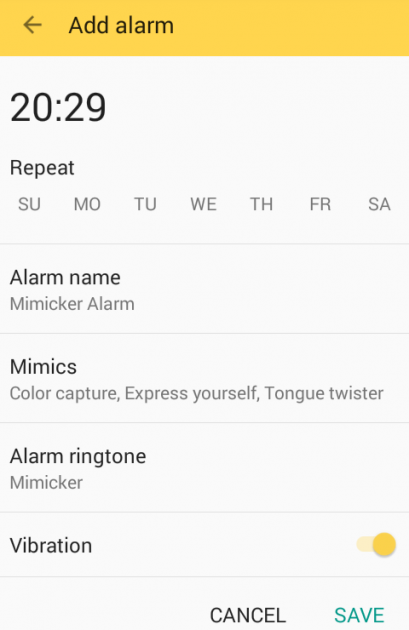 Apart from these interesting options, however, there aren’t any particularly useful settings; there are only some very basic options, such as sound volume, alarm duration and snooze duration.

Timely can be described as the evolution of simple alarm clock apps. It has a fairly simple yet impressive interface that will surely grab your attention. Google has been its owner for the past two years, but it hasn’t made any significant changes to it. 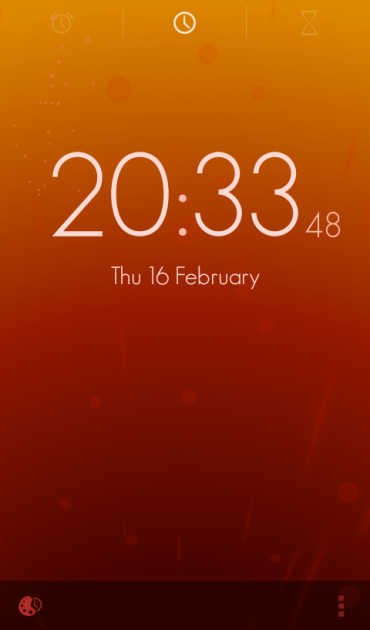 Unlike the previous alarm clock apps, Timely is completely configurable. You can change the to any color you wish, as well as replace the clock widget. 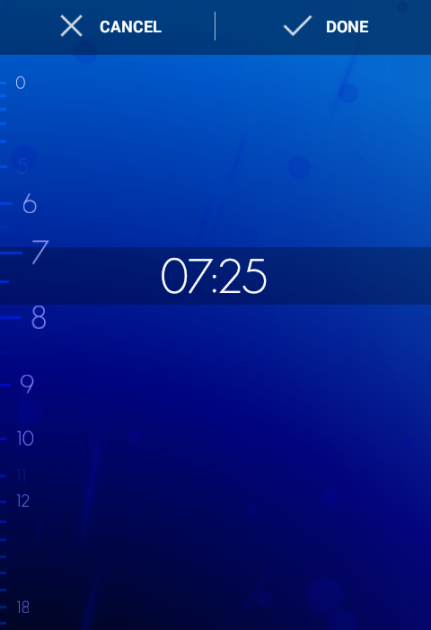 As for its functionality, it allows you to snooze or deactivate the alarm by shaking the device, creating a random pattern, solving mathematical operations, or perform matching tasks.

Most people have heard, more or less, of Dwayne Johnson, also known as The Rock, who's is a famous actor and wrestler. The Rock Clock is an application based on his lifestyle, and aims to help you achieve your goals. 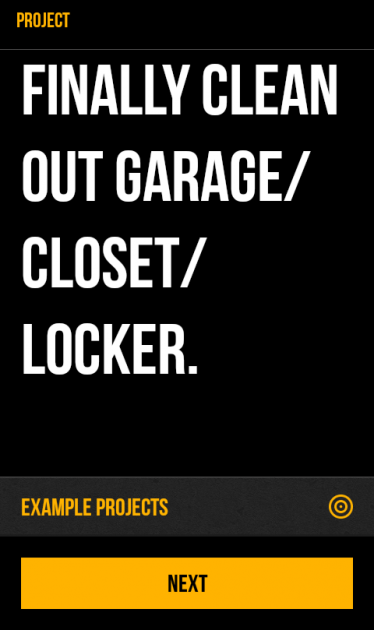 You can add a goal or task that you must complete, and see him every time your alarm clock rings, until your task is done. Whenever you dismiss the alarm, a new video will be displayed with various quotes. In addition, you can also hear The Rock encouraging you to not quit your efforts. 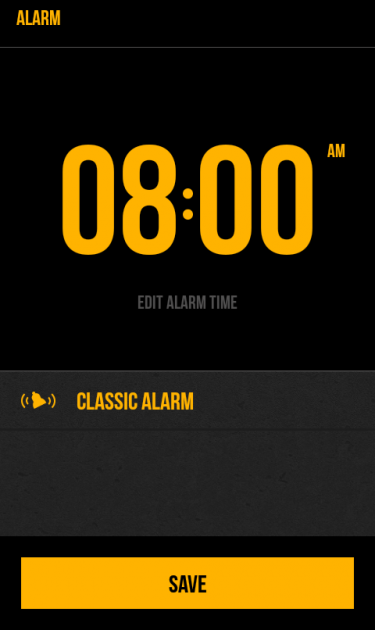 The snooze feature is not present here, because, as the app states, "The Rock is not a fan of this button". 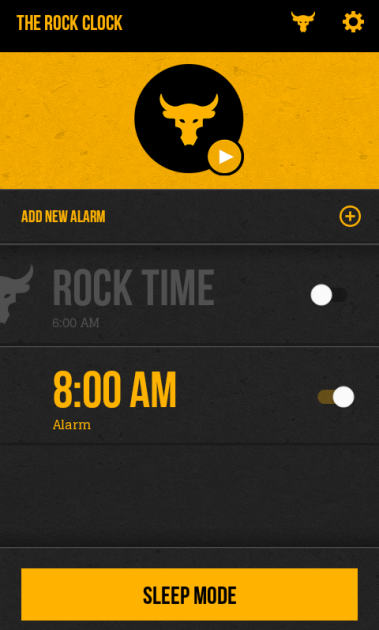 When it comes to settings, the only thing you can change is the alarm sound.

I Can’t Wake Up

I Can’t Wake Up is the simplest app for an alarm clock app. Its neutrality makes the app suitable for all types of users. 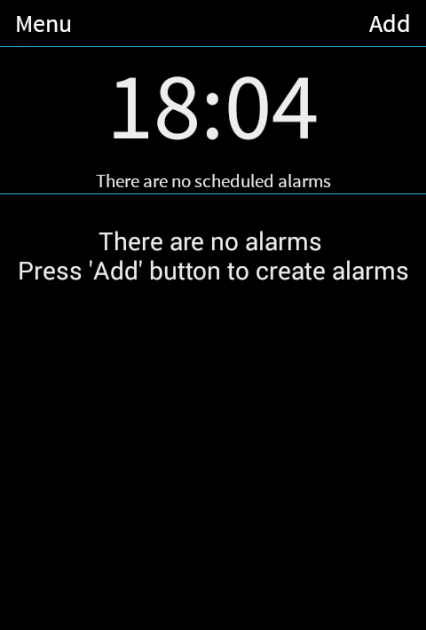 It includes eight different ways to turn off the alarm, such as memory tests, copying text and dragging a bar. No other application in this guide offers that many different ways for snoozing and turning the alarm off. 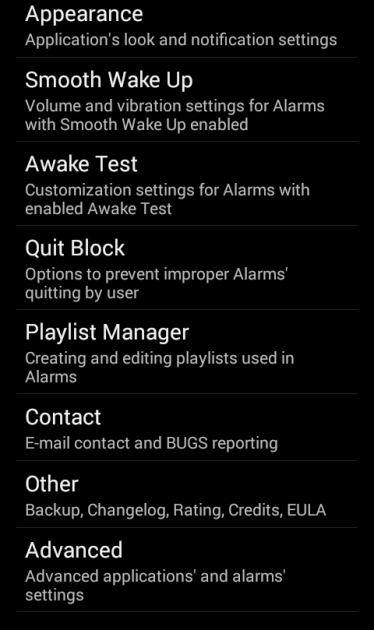 Apart from this advantage, it does not have any interesting setting.

Alarm clocks for tracking your sleep

Besides alarm clock apps for immediate awakening, in this section we will go through a few apps for tracking your sleep.

These applications record information during your sleep, and compute various statistics.

Good Morning Alarm Clock is not a simple alarm clock app. By means of a particular technique, it is able to wake you up exactly at the right time. 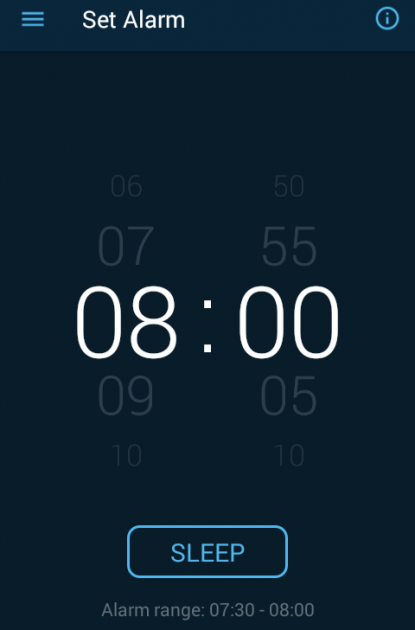 While it may sound strange, all people have the same sleep cycles. Each cycle has a fixed duration, and different sleep “depths”. By defining the time you sleep and wake up, the application is able to compute at which sleep cycle it should wake you up, so that you feel less tired. 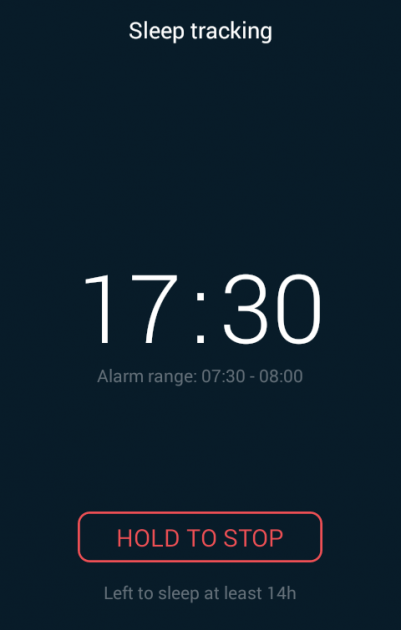 Of course, this process is not uncontrollable, since it can wake you up only half an hour earlier than you have defined.

Alarm Clock for Heavy Sleepers can be considered as a more developed version of the Good Morning Alarm Clock. It works with the previous philosophy to create various statistics regarding your sleep. 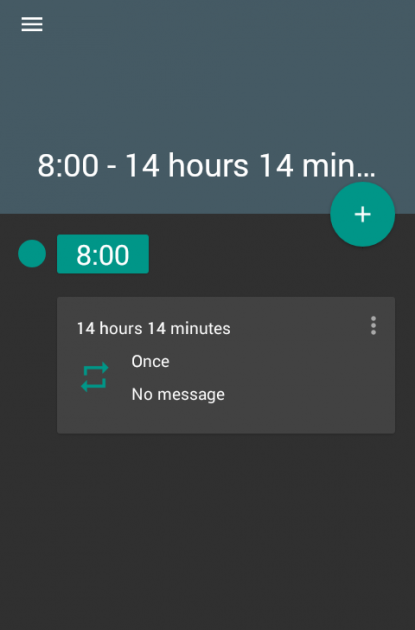 Apart from the statistics it provides, you also have the ability to dismiss the alarm by solving mathematical operations, copying text or even. To use the Wi-Fi method, you need to define the location where you sleep, as well as an alarm location. Depending on signal strength, the application can detect whether you are at the alarm point, to turn off the alarm.

Another unique feature of Alarm Clock for Heavy Sleepers is the ability to add religious and national holidays of all countries as "off days".

Similarly to the previous two alarm clock apps, Sleep Better with Runtastic records statistics according to your sleep cycles.

Moreover, it allows you to understand the influence of alcohol, coffee and fitness in your sleep by keeping track of each activity, and its consequences that it had to your sleep session. 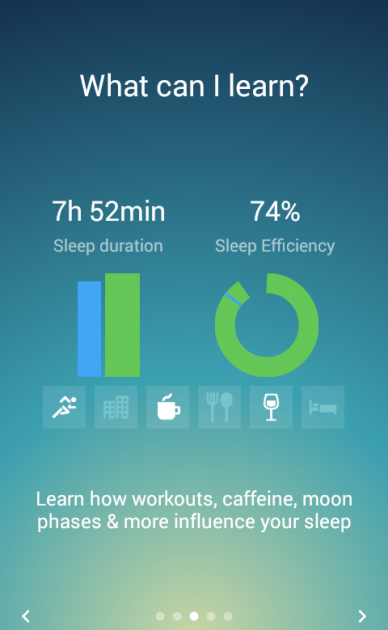 However, in order for the results to be accurate, the app should be used frequently, and you should always enter correct information. 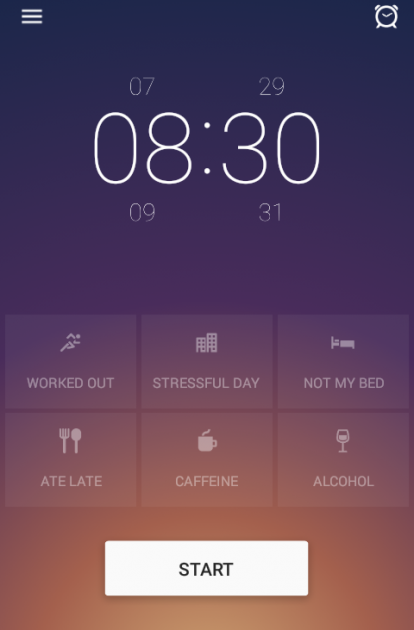 And this app concludes the alarm clock app guide. For more customizations, we did an How To Perform A Complete And Refreshing Android Makeover article as well.