Google’s online video giant YouTube is about to embark on its largest ad campaigns ever since its launch to promote some of its best channels and tap into more fruitful advertising deals. YouTube plans to disrupt television, but it needs to use television to get the message across the world, letting people know that YouTube is no longer a platform just for funny cat videos.

The new ad campaign includes TV commercials, billboards and print media, and of course online advertisement across Google products and the search engine, profiling stellar individuals who have succeeded in developing large audience on YouTube. The first TV commercial talks about Bethany Mora, a teenage girl who streams videos about makeup and clothes. Other YouTube stars include Michelle Phan’s beauty tutorials and Rosanna Pansino’s food channel. Later this year we will see some more YouTube starts highlighted on TV. 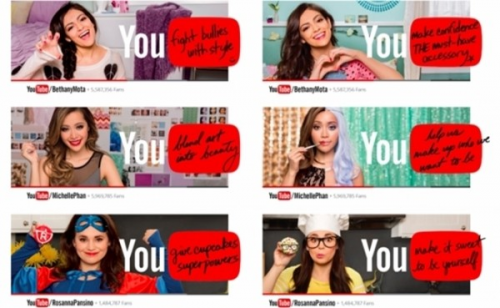 Apparently, Google is trying to make YouTube content appear more lucrative to advertisers as a part of the large-scale campaign to make advertisers switch from traditional TV ads to YouTube ads. Google is definitely sharpening its machete against the TV ads. Starting since May, businesses will be able to use information gathered by Nielsen to acquire advertisement time targeted at specific demographics, similarly, as in TV ad business. As of now, businesses are already buying ads at the top 5% of YouTube content for various demographics, measured by watch time, views and shares/likes across social networks.

It is not the first time Google is trying to convince businesses to trust Google audience data, but advertisers requested third-party data metrics, and this is where Nielsen came along. Now, Nielsen will provide data about YouTube audience demographics.

In 2013, YouTube generated $5.6 billion in advertisement, according to eMarketer research firm.