The Top 5 Choices for Running a Home Media Server

Home media servers let you stream your locally stored and online media library onto any device that can connect to the internet. The days of having to transfer files using storage devices like SD cards, USB sticks, and external hard drives are long gone. With a home media server installed on your PC you can quickly share all of your hard drive's contents with any device just as quickly as loading a streaming video on YouTube.

However, not all media servers are the same, and depending on your intended use of the application, you may prefer one solution over another based on a through comparison of their features. To help you save time and hassle we've created the following review of five of the most popular home media servers available today:

Plex.tv is a unique web-based media server service that combines a robust online user interface with convenient file sharing and streaming capabilities. Plex lets you stream all of your favorite online media channels and downloaded media content to any type of device. The following screenshot best describes what the service can do: 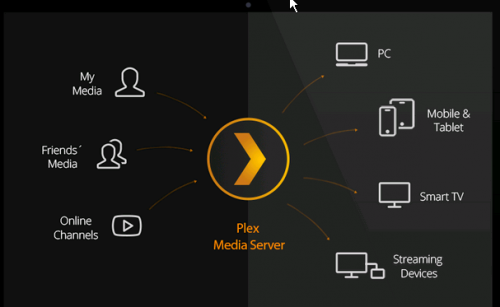 Plex offers a variety of downloads to accommodate all types of devices, including but not limited to desktops, laptops, smartphones, tablets, smart TVs, and media streaming boxes (i.e. - Roku, Google TV, Chromecast, etc.). In essence, Plex.tv brings all of your media from a variety of different sources into one convenient and well-designed library/player. The content menus and media player look so good on a larger display that you could easily confuse it with a modified version of Netflix or other corporate media service – with the awesome difference being that you have full control over customizing the interface.

The Plex Media Server can be installed in Windows, Mac, Linux, FreeBSD, or directly to your network as a network-attached storage (NAS) device – compatible with Netgear, Synology, QNAP, unRAID, Asustor, and Drobo. Plex Mobile is available on Android, iOS, and Windows Phone 8.

Adding online videos to your media server queue is fast and easy with the Plex bookmarks button or “Add Videos by Email” option. If you'd like to learn more about what Plex can do, visit their features page for more info.

In addition to its free product, the site also offers a Plex Pass, which gives you access to premium features at the cost of $3.99 monthly, $29.99 yearly, or $74.99 for a lifetime subscription. The paid Plex Pass gives you access to cloud syncing, multi-user control, access to the latest media trailers and extras, and automatic picture uploading from the camera of your smartphone or tablet.

Overall, Plex.tv offers the most comprehensive and all-inclusive media serving solution. The interface includes a built-in media player, and integrating additional content into your playlists is quick and easy. Being that Plex is compatible with the most devices and, in our opinion, has the most visually appealing design, we've ranked it as our top choice for running a home media server.

Xbox Media Center, (XMBC), or Kodi as it has recently been renamed as of August 1st, is a free open source entertainment hub/media player that can serve as a home media server by providing access to all of the files stored on your local network and the internet. The interface is designed to be used with television sets and remote controls, so it does particularly well on smart TVs and larger monitors. This should give you an idea of what the main interface looks like: 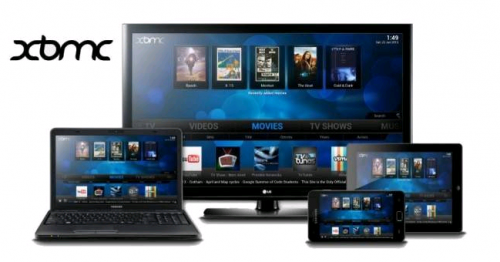 One of the most appealing aspects of this software is that it can be enhanced with the addition of add-ons that provide quick and easy access to the latest and greatest media content. In fact, you can't really appreciate the full power of the software until you've modified it with some of the best add-ons.

For example, you can install plugins that let you access the Netflix, Hulu, and Amazon media libraries without leaving the XBMC content library. LifeHacker has a great guide on how to get the most out of XBMC (again, now called Kodi 14) using the top add-ons.

It is interesting to note that our top pick (Plex) was actually created out of a fork of the open source XBMC platform. So why did we put XBMC/Kodi slightly behind Plex then? Plex is just easier to use, but if you want the most customizable solution then we would recommend XBMC/Kodi. Linux users and advanced media collectors would probably find this software to be more enjoyable and extensive than Plex, so that is a factor to keep in mind if you're a power user.

As of release 13.1, XBMC can be installed on Windows, Linux, OSX, iOS, Android, Raspberry Pi, and Ubuntu. To learn more about the software's overall feature set, visit their About page for more info.

Amahi is an all-inclusive home server software that can turn any PC into a personalized media server. The learning curve for Amahi is bit steeper than Plex and XBMC, but it offers access to just as many plugins, and it has many of the same capabilities, so it certainly deserve a spot on this list. You can take a tour of the software here, or check out this screenshot for now to get an idea of what part of Amahi's media streaming library looks like: 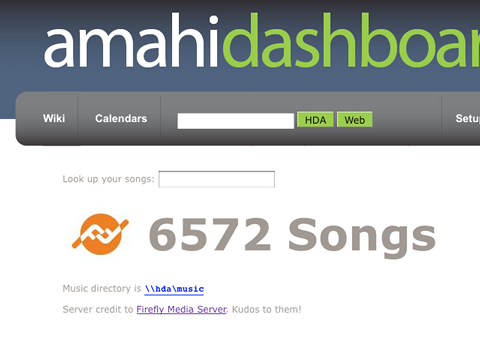 As far as features are concerned, Amahi offers a variety of unique and useful modules and apps that facilitate media streaming, disk pooling (networking multiple hard drives to make them accessible as one storage space), creating virtual private networks (VPNs), automated backups and file syncing, disk monitoring, and much more. Check out the feature gallery to learn more about what Amahi can do.

Perhaps the most impressive aspect of Amahi is that its functionality can be enhanced and extended using more than 170 different apps that can be easily installed from their official app library. The entire software and all of its apps are built in an open source, community driven development platform complete with its own IRC channel.

If you're a developer looking for a versatile home media server that can be heavily customized with minimal effort and maximum support, we recommend giving Amahi a try. If you're interested in learning how to use Amahi, LifeHacker has done an excellent piece on how to use Amahi to turn an old PC into a versatile home server that can act as a media server, VPN, or NAS.

FreeNAS is more so intended to serve as a network-attached storage (NAS) solution than a media server, but it can be used to serve any type of file or data. FreeNAS is somewhat similar to the previously mentioned Amahi, except it is loaded with many more advanced options for configuring an optimal NAS, and is therefore recommended for advanced users. This screenshot should provide a glimpse of what to expect in the interface: 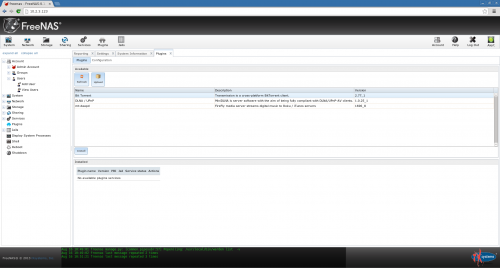 FreeNAS offers a long list of beneficial features in addition to being able to act as a home media server, including but not limited to automated data protection, replication, sharing, and encryption. It can be set to create automatic backups that keep your entire filesystem synced to avoid data loss. You can learn more about the software's main features by visiting this page.

Be sure to note the top plugins listed at the bottom of the features list – there is a plexmediaserver plugin that lets you use Plex.tv within FreeNas. There's also a miniDLNA plugin (also known as ReadyDLNA) that is fully compatible with all DLNA and UpnP-AV clients, and owncloud – a comprehensive cloud storage management app.

FreeNAS was originally introduced way back in 2005 as one of the first free network storage solutions. Since then it has amassed a sizable community of developers that continually improve the software through its open source development structure.

OpenMediaVault (OMV) is one of the leading open source network-attached storage (NAS) solutions. Unlike the other programs on this list, it is not compatible with a large number of operating systems, as it is based in Debian Linux. It is actually described as a “NAS operating system” that is kind of like an offshoot from FreeNAS. Here's what the main menu looks like inside the OMV demo: 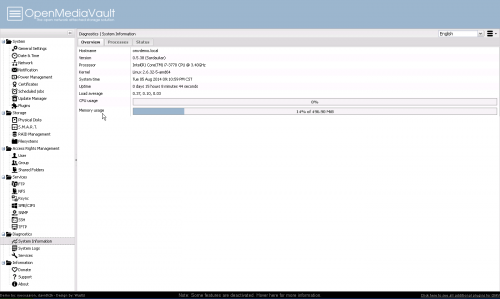 With a web-based administration interface, a custom plugin system, smart disk monitoring, and a plethora of other advanced features, OMV can serve as a complete replacement for Windows Server Essentials. However, we should mention that it does not come pre-loaded with DLNA media streaming capabilities – you'll need to install a plugin for this, but doing so is not complicated.

The developer, Volker Theile, worked on the FreeNAS project before launching the OpenMediaVault in 2009. We added this one to the list because it is an ideal way for advanced users and developers to create their own unique home media server by creating custom plugins and elaborating on the source code through the API. Stop by the Wikipedia page for OMV to learn more about its history and capabilities.

This is certainly not a solution that we would recommend to the average computer user, so avoid it if you're looking for the most user-friendly and enjoyable media server experience. Instead, this software provides an excellent building foundation for developers that want to create their own custom media server.

If you really want to know what the interface looks and feels like, we recommend running the OpenMedia Vault demo. Alternatively, you can make quick stop by their features page to view the main perks.