Home
Articles
Spotify vs. Pandora vs. Google Music: Which Is Best for Streaming Music?

Spotify vs. Pandora vs. Google Music: Which Is Best for Streaming Music?

Streaming music is a segment of the online market that continues to grow in leaps and bounds. So much so that early movers Pandora and Spotify have been joined by Google Music and Beats Music. As well as internet radio stations where listeners can skip tracks they don't like and adjust what they listen to over time, the level of customization available to listeners with streaming music services is almost mind boggling. 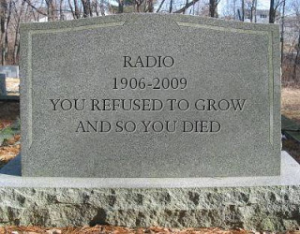 Gone are the days of radio stations where the listener is stuck listening to same Top 20 songs repeated on the playlist over and over. Now it is all about the music consumer having a choice about what they listen to, how they listen to it and where they listen to it. Millions of tracks are available often for a low flat monthly fee, with mobile apps streaming music through to smart phones and tablets, and listeners happily listening over wireless or cellular connections. Music freedom is at hand.

Napster really started off the revolution for digital music, but both Pandora in the early days a decade ago and more recently Spotify helped put streaming music into the minds of younger and older consumers who were willing to pay for greater access to music and other audio content that they liked.

Which streaming music service is best when comparing Spotify to Pandora to Google Music? We did deep and give your our verdict: 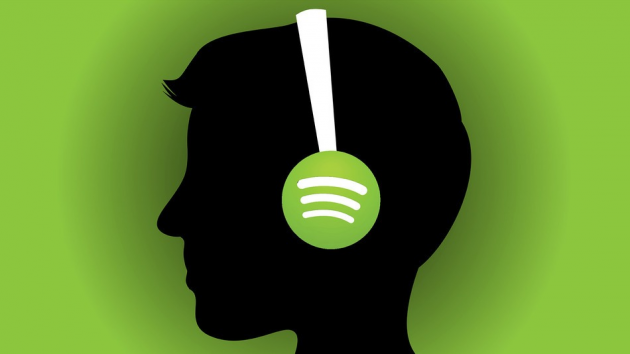 Spotify pioneered the monthly payment plan for on-demand streaming music. The company offered a free version initially to both Windows and Mac users which helped to interest people in the service. Their 20 million song catalog also provided some allure too. The audio quality is now excellent at 320 Kbps.

Spotify isn't fully comprehensive with its catalog but it covers most bases very well. There are a few hold outs with The Beatles still refusing to list their songs on the service. Occasionally there are some odd situations like individual tracks disappearing from an album listing and then reappearing again. Some bands also refuse to list on any streaming service because they say the financial compensation is just too low.

The company offers on-demand playback to the desktop, but this is currently lacking in the mobile apps.

Spotify has a premium service priced at $9.99 each month. The premium service allows subscribers to listen to tracks while offline, delivers the complete Spotify listening experience on mobile devices, and removes all advertising. There is a 50 percent discount for students. A 30-day free trial is offered for the premium service to test it out.

There is also a new Spotify Music app for Android and iOS tablet listeners which provides on-demand streaming with an ad-supported program that is free. Windows and home audio systems are also supported. 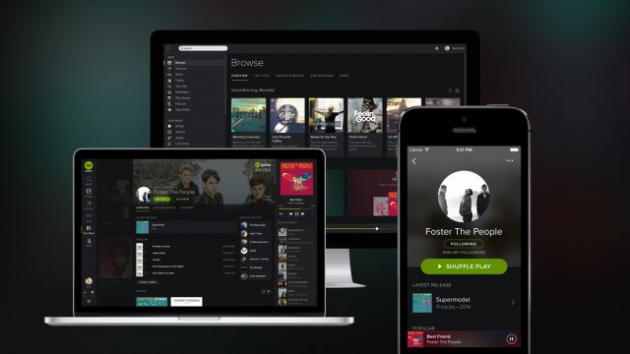 Pandora promotes their service as a “new kind of radio” that lets listeners play the songs they want to hear. The web site will encourage the visitor to enter the genre, composer or artist into the search engine. This will create a new radio station tailored around this search. (Spotify also offer a similar feature via its listening history feature.)

The radio service has 15 million songs in its catalog. The songs are streamed at 192Kbps rather than 320 Kbps so the quality is lower than competing music streaming services.

A search for “Hans Zimmer” will create a radio station that includes many of his compositions and also mix in other composers who have a similar dramatic bent to their movie scores. 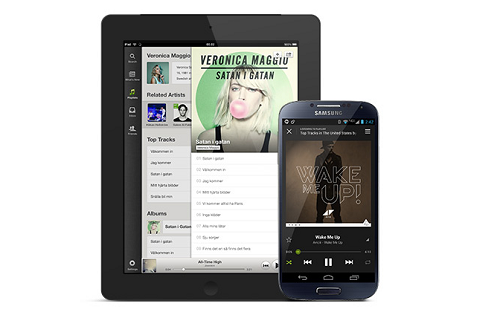 Pandora has a step up against regular radio stations because the service lets the listener skip songs that they don't like. There are restrictions to this feature though because only a few skips are allowed each hour and there are also limits to the number of skips allowed for each radio station being listened to. Skip too many and the user will be encouraged to create a different station that better suits their tastes.

There are Pandora Radio mobile apps for iOS (iPhone and iPad compatible) and Android. There is also support for the Windows via the web browser, Mac, Blu-ray players, Smart TVs, PS3, PSP and PS Vita devices too.

Pandora has a premium version that sells for $3.99 (the price adjust periodically). The premium subscription increases the number of song skips that are permitted per hour and per station, reduces the timeouts, and removes both the video and banner advertising.

The Pandora subscription is clearly cheap, but it is still based around a radio station format and as such the listener cannot completely pick what songs they wish to listen to and those that they wish to skip. Offline playback is also not supported because the service retains it fundamental radio station structure which doesn't really permit this option.

The service also appears to cater to listeners in the United States, Australia and New Zealand only citing licensing restrictions for other countries and regions. Accessing the Pandora web site from outside of these countries displays an apology page.

Google Music is a competing music streaming service from the search giant for those who aren't satisfied with all the free content from its YouTube video site. Approximately 18 million songs are included with the service which is almost on a par with Spotify. Songs are streamed at 320 Kbps.

The service offers a monthly subscription of $9.99 with a 30 day trial period. Subscriptions are only available in certain countries and regions due to licensing restrictions.

Listeners can listen to millions of songs each month just like with Spotify. A personalized radio station can be created in a similar vein to Pandora. What Google terms “smart” recommendations are used to adjust to the each individual listener's personal taste in music. Offline listening is also supported.

Whilst the internet radio format is similar to Pandora, with Google Music you get unlimited skips which lets the user customize the radio on the fly by repeating skipping tracks they do not want to hear.

Listeners can also personally buy individual tracks or complete albums in a way similar to the way they can at the iTunes Store. As such, Google Music attempts to learn from the experience of both Spotify and Pandora to try to meld their services into one of their own which perhaps combines the best features of both competitors.

Google have also added a new feature that lets iTunes users upload up to 20,000 songs over to Google Play at no cost. No paid subscription is need to take advantage of this feature. 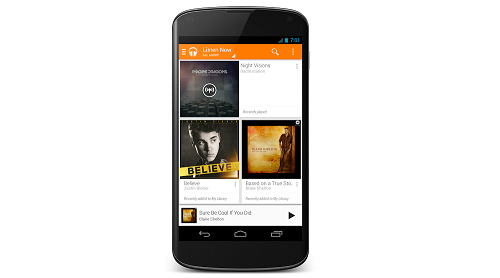 Which Is the Best Streaming Music Service?

Between Spotify and Pandora, if the listener prefers to guide exactly what they listen to then Spotify is the clear winner. Other than the few bands and solo artist omissions to the catalog, they have one of the most extensive catalogs of any streaming service.

Pandora is ideal for users who wish to listen to radio stations but with a degree of control to guide what type of tracks they wish to listen to. A search for “romantic soundtracks” might bring up a collection of songs from recent (and not so recent) romantic comedies that will be pleasing enough. The price point is much lower which for some buyers will make signing up to Pandora internet radio service a no brainer. Pandora also has by far the widest device support.

With Google Music added to the mix which combines some of the best features from both Spotify and Pandora, the choice becomes much harder. They match the subscription cost of Spotify at $9.99 per month. As such, on price they are more in competition with Spotify than Pandora as anyone serious about customized internet radio would find the cheaper Pandora subscription much more appealing. Google Music also has millions of songs with many selling individually and as part of an album. This is good but not something that many other sites like the iTunes Store have not already been doing for some time already.

On balance, Spotify is still the leader in the space but Google Music has much potential.