Home
Articles
Samsung Gear S vs. iWatch: An Early Comparison Based on What We Know So Far

Samsung Gear S vs. iWatch: An Early Comparison Based on What We Know So Far 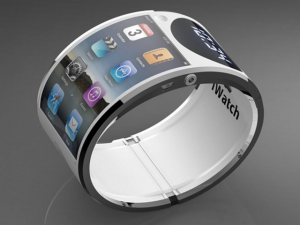 With Apple announcing that it will be revealing the details about its upcoming iWatch at the same September 9th event it is set to unveil the iPhone 6 at, many consumers have been wondering what the competition has in store.

As of right now, the Samsung Gear S is by far the leading competitor, which is not surprising considering how long the Galaxy smartphone series has been duking it out with the iPhone series.

Although we have a lot to learn about the iWatch, including whether it will actually be called an iWatch or something else, we know enough to make a very basic preliminary comparison between Apple's upcoming smartwatch (whatever it winds up being called) and the Samsung Gear S:

Although we're not quite sure yet what the display on the iWatch will look like, we do know that at least one version of it is expected to come with a highly-durable sapphire lens.

Reports indicate that the iWatch will be available in a lineup of several rumored display sizes, including a smaller version in the range of 1.3 inches to 1.6 inches, and a larger version with a display in the size range of 1.8-inches to 2.5-inches – we'll have to wait until Sept 9th to find out the exact display sizes.

The Gear S runs on a modified version of the open source Tizen mobile operating system. Meanwhile the iWatch is expected to run on a compact, yet robust mini version of iOS 8 that will most likely include the new HealthKit suite for enhanced fitness tracking.

In fact, the iWatch should be able to do most of the things an iPhone can do with a few exceptions. Although the iWatch is expected to be powerful as a standalone device, you'll need to pair it with an iPhone to send and receive texts, calls, and mobile notifications.

On the other hand, the Gear S holds the tremendous advantage of having a SIM card slot, so you don't need to pair it with a phone to make and receive calls, texts, and notifications. This is perhaps the biggest improvement over its predecessor the Samsung Gear 2 and its leading competitor the iWatch, and it may be a deciding factor for many consumers.

The iWatch is also expected to come equipped with an NFC chip for fast digital payments and data transfer, as well as a biometric fingerprint sensor and various other sensors that monitor a variety of fitness stats like calories consumed, distance ran/walked, blood oxygen levels, sleep activity, blood sugar levels, heart rate, and more.

In comparison, the Gear S will have very similar health tracking capabilities within its S Health and Nike+ Running apps. We fully expect the iWatch to be compatible with more apps given that it will support the Apple App store, but the Gear S could be more ideal for people who prefer simplicity and native functionality over a slew of third-party apps.

The Gear S is noted for its curved appearance that makes it look like a sleekly evolved version of its counterparts. We still don't have an official model to look at for the iWatch, but there have been a number of mockups, leaks, and concept images circulating online. The general consensus is that the larger version of the iWatch might be a bit unsightly as a watch at 2 inches in diameter.

Although we won't know for sure whether the iWatch will be waterproof until the launch event on September 9th, we expect it to be, given that many Android Wear devices, and the Tizen-based Gear S, are waterproof up to IP67 certification, which means they can be safely submerged in up to 1 meter of water for up to thirty minutes. So it would be very surprising if Apple failed to make the iWatch waterproof as well.

One of the major complaints about the Gear S is that its 300mAh battery can only last for about a day per charge. Another competitor, the LG G Watch, isn't much better with a battery life of about one and a half days per charge. However, Apple has apparently been experimenting with a curved battery design to try and improve upon the current status quo for smartwatches.

Still, with the demanding nature of the small touchscreen and powerful OS draining energy on a continual basis, it could be tough for Apple to match the impressive 3 to 7-day battery life seen in more basic smartwatches like the Pebble. The iWatch is also expected to support wireless charging.

The Gear S is apparently going to beat the iWatch to the market, as Samsung has recently announced that the watch will most likely be released at some point in October. Although the iWatch is expected to be unveiled on September 9th, it is quite possible that the official release date won't come until early 2015.

By that time the Galaxy Gear S will already have sold many units, but then again it is hard to tell whether that is an advantage, as the iWatch will be “the new smartwatch” that sparks people's interest after the Gear S hype has quieted down a bit.

As far as prices are concerned, the iWatch is expected to hit the market in the range of about $400, which seems costly for a device with such a small screen, but not really when you consider the price of other luxury watches that do much less. The price tag of the Gear S has not been discussed much but we imagine it will be similar to the cost of the iWatch.