It appears all of the news about Google Glass lately has stirred up a lot of interest in the emerging smart glasses market, as Samsung has already filed a patent for a very interesting and competitive alternative to Google Glass.

The headset will be of a completely different design structure, with the Glass screen being attached to a one-sided earmounted design. It looks very similar to a Bluetooth hands-free headset (except with a Glass window protruding in front of the right eye instead of a microphone hanging near the jaw). See prototype diagram below: 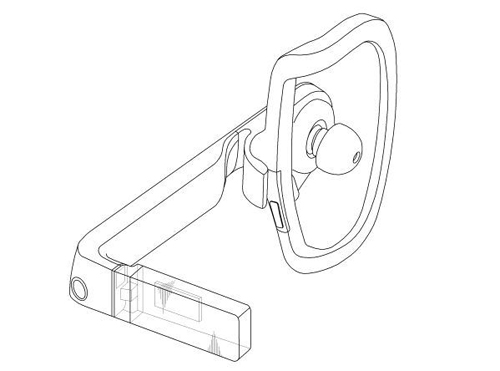 The Galaxy Glass screen will be securely and snugly mounted on an adjustable earphone device. The arm that attaches the screen to the earpiece can be quickly folded out of the way thanks to convenient hinges.

Samsung has already filed a patent for the above prototype with the Korean Intellectual Property Office. The Galaxy Glass headset is described as the “earphone” in the text of the patent filing, which highlights the device's unique advantage of letting users experience the wearable computer experience without having to wear a pair of glasses. So although this product is in the same market as Google Glass, it is more compact, less noticeable, and it actually offers a very different aesthetic alternative of not having to wear glasses.

Samsung representatives have been very clear in stating that the initial distribution rounds of these headset will probably not produce much profit in the short-term, but that the aim to lead innovation in the new market will drive the production of a very competitively priced, feature-packed Google Glass alternative.

With Google Glass being priced at $1500 and Google taking its time before releasing the product to the consumer market, there is an opportunity for a major well-known competitor like Samsung to come in and release a more affordable alternative before or shortly after the commercial introduction of Google Glass.

Although not much has been mentioned about the specs, we do know that the ear-mounted Samsung Galaxy Glass would be compatible with the latest version of the Android operating system, so it will be very similar to Google Glass in terms of functionality, yet very different in terms of look and feel. The Galaxy Glass will be easily synced to smartphones, tablets and most other new mobile devices with Bluetooth functionality.

Galaxy Glass will be made out of a transparent resin material that will come in a variety of colors and styles, and it will be marketed as a device that facilitates wearable augmented reality to more effectively interface with the internet and digital world yet without causing excessive distraction.

According to an article in the Korean Times from earlier this month, a Samsung representative has been quoted as saying “the smart glass market is huge.” Indeed, with wearable computer being an entirely new industry that is expected to bloom in 2015 it is almost surprising that prominent manufacturer's like Samsung have waited so long to join in on the competition.