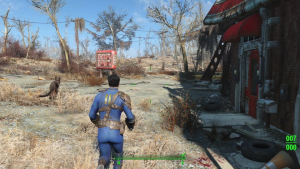 According to Russian news site RT, a man from Siberia is suing Bethesda Game Studios, the makers of Fallout and Skyrim, with the claim that the game Fallout 4 is unreasonably addictive, to the point of forcing him to lose his wife and job.

The man apparently developed a severely uncontrollable addiction for the game, culminating in a three week gaming binge that caused him to miss work numerous times and neglect his family, ultimately resulting in a divorce and loss of employment. He also says the game caused him to stop eating and sleeping regularly.

The nearly 30-year old adult is seeking a settlement of $7000 (500,00 roubles) as compensation for the emotional and financial distress the absurdly addictive game caused him. This isn't the first time a gamer has sued a company for making addictive games. In the US, a man from Hawaii sued the makers of Lineage II and won back in 2010.

One has to wonder whether this lawsuit might actually wind up being more beneficial for Bethesda than the man who is suing, even if he does take home the amount he's seeking. At this point the game is receiving a lot of publicity for “being addictive." While some fear mongering anti-gaming critics might see that as negative publicity, to many gamers who want the most addictive and immersive game out there (there are top 25 lists of the most addictive games this reason), this is practically an advertisement with a testimonial to back it. To make the incident even closer to a perfectly planned publicity stunt than a threatening lawsuit, the man suing even said that he would have waited “until he was on holiday” to buy the addictive game.

Are Some People More Likely to Become Addicted to Games than Others?

On a more serious note, there is evidence that video games can become unusually addictive for some people. Recently the University of Utah Health Sciences published a study that used brain scans to determine that compulsive gamers are “wired differently” from most people. In fact, for some it can become a deadly addiction. There have been several cases of people dying after staying awake for consecutive days on gaming binges.

Earlier this year a 32-year old died after a 3-day gaming session in internet cafe. Eerily, reports say that the other gamers present in the cafe seemed utterly undisturbed by the man's death and didn't even stop playing their games until investigators came and cordoned the table off, at which point most of the gamers didn't pause for more than brief moment before returning to their games unbothered.