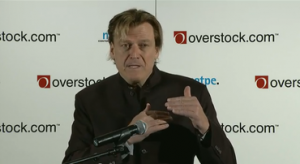 On Tuesday at a press conference in Miami, Overstock.com CEO Patrick Byrne announced that the site will be launching a new on demand streaming video platform in the first half of 2015. The new service will compete with more established competitors like Amazon's Instant Prime Video, and will initially be offered exclusively through the company's Club O loyalty program.

Perhaps the funniest part of all this is that there was a fake news story in The Onion back in November of 2013 that stated Overstock.com would be opening its own streaming video service, and this announcement made on Jan. 20th of 2015 is almost like a fulfillment of what turned out to be somewhat of a spoof prophecy.

Not Too Late to Compete

According to the announcement, Overstock will start the service with an impressive 30,000 titles ranging from TV shows to movies. That's not a bad start when you consider the fact that Amazon Instant Prime Video currently has 40,000 titles and has obviously had a huge head start in the industry. But just how big is that head start really?

Despite the fact that Amazon has been running one of the leading on demand media services online for years now, Mr. Byrnes and others seem to hold the opinion that it is relatively early in the game, stating: “Yes, there are some big players... but really it's just begun.

Overstock's CEO called the move into on demand media a natural next step (which is probably why The Onion was able to predict it). As a leader in eCommerce, Overstock.com has become somewhat of a household name in recent years, and has a built a strong web presence with over 25 to 40 million visitors per month. The company has also seen a 42 percent increase in the amount of new Club O memberships during the past year.

We're seeing an eCommerce giant that wants to take the next step in becoming more successful, so it would make sense that they would follow in the footsteps of Amazon, Target and Walmart, all of which now offer similar services. With such a large client base, the company would be operating complacently if they failed to capitalize on at least a small portion of the streaming video market.

Most major online retailers go through a transformation phase in which they start to offer and upsell additional services. In the announcement, Mr. Byrnes emphasized the fact that there a lot of loyal Overstock customers who are turning to Amazon and other alternatives to rent and watch movies online, rather than buying the physical titles. By launching the new service, Overstock hopes to retain some of its loyal customers and provide a service that can compete in quality with Amazon Instant Prime and others.

While it is commendable that Overstock's leadership has finally recognized the need for an online media platform as an alternative to selling physical titles, it certainly is not a revolutionary move. In fact, some would say it is quite late when you consider that two major retail chains (Walmart and Target) have already joined in. But, then again the old adage is “better late than never.” And, the hope is that whatever was lost in late timing can be made up for in the quality of the service delivered.

Last year we saw the introduction of Google's Chromecast and Amazon's Fire TV Stick, and these two devices really started to evolve home entertainment altogether by linking devices (particularly TVs) and media services in ways never seen before. Seeing that such products have had decent success for both Google and Amazon, Overstock.com is wise to want in on the market, especially considering the volume of their pre-existing loyalty membership.

There are more than a dozen media streaming devices and subscription-based services to choose from, but perhaps the most exciting coming up in 2015 is Sling TV, which streams a collection of popular cable channels to almost any device via the internet. Unfortunately, Sling TV is currently only available via an invite, but it is easy to sign up for an invite by providing your email address on their homepage. Overstock.com's new video on-demand service will be very different from Sling TV, but the two are prime examples of how there are still new players joining the streaming video game.

#news #streaming media #amazon
Comments (0)
< PREVIOUS ARTICLE
Sling TV Explained: What Channels Do You Get and What Makes it Special?
NEXT ARTICLE >
Microsoft Introduces HoloLens Holographic Goggles: Might Be The Best Device of 2015