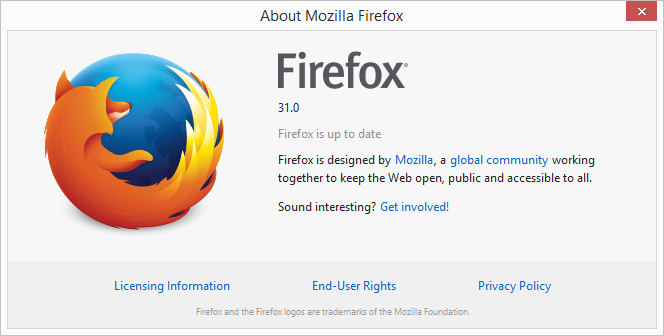 Mozilla is wasting no time in continually updating Firefox to try to keep pace with the Google Chrome browser and bring users back to the fold. Over the last few days they've released Mozilla Firefox 31 and users will be prompted to update their version of Firefox when running the app. Alternatively, it can be downloaded from the Mozilla site.

There are a number of new features and improvements with Firefox 31:

In response to the addition of the Google search box in every new tab and seemingly no way to disable it within Firefox itself, some enterprising developers have developed add-ons to remove it. The New Tab Tools is one such extension that will remove it for you if you really find it that offensive. For users with Stylish extension installed already, the Firefox Remove Search Field can be obtained from userstyles to remove it too.

The malware detection option can be disabled by accessing it and disabling it via Preferences. Alternatively, in the address box, type “about:config” and access the browser.safebrowsing.malware.enabled setting and set it to false. It is believed that the Chrome Safe Browsing feature remains more secure than the new malware detection from Firefox. This is not surprising as this has been a feature present in Chrome since 2012.

The full Firefox 31 release notes can be found here. This latest update comes only a few weeks from the last two updates which made Firefox resemble Google Chrome much more than ever before.

A Metro UI Windows version of the Firefox browser especially for Windows 8/8.1 was in the works at Mozilla, but this has been shelved for the time being. Interestingly, apparently there were too few beta users compared to regular Firefox beta users and Mozilla felt that this indicated a general lack of interest in a Metro UI version.