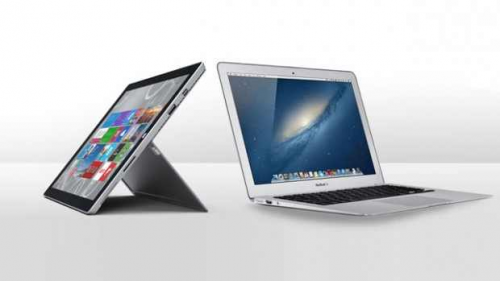 Microsoft is giving MacBook Air owners the chance to get a discount of up to $650 on a Surface Pro 3 in exchange for trading in a MacBook Air. This new trade-in promotion isn't exactly surprising, considering Microsoft has used marketing tactics like this before, offering iPhone and iPad owners store credit in exchange for their Apple devices.

At a press conference in New York on May 20th, the Corporate Vice President of Microsoft's Surface tablet department, Panos Panay, implied that the Surface Pro 3 would be the perfect device for consumers to start replacing their laptops with. So, again – we can see that Microsoft has been preparing to pitch the Surface Pro 3 as a tablet that can rival a laptop, and with the 13-inch MacBook Air being such a similarly sized and closely priced competitor, it make sense from a business perspective for Microsoft.

The software giant-turned-tablet-manufacturer has confirmed that all models of the Surface Pro 3 will be included in the promotion, which means you'll be able to use the store credit towards the purchase of any of the 5 versions below:

In addition to the aforementioned spec comparison, the Surface Pro 3 also comes in two RAM variants – 4GB or 8GB. Of course, any tablet with 8GB of memory is bound to have impressive multi-tasking and processing capabilities.

So Should You Trade In Your MacBook Air for a Surface Pro 3?

Ultimately, the Surface Pro 3 and the MacBook Air are both flagship products for two of the world's leading tech brands – Microsoft and Apple; considering that and the fact that both devices are available in a diverse selection of sizes and configurations, you really can't go wrong with either one.

With that said, the decision to switch over to the Surface Pro 3 and trade in your MacBook Air is one that should made after strong consideration of your own personal preferences and the opinions of others.

PCMag has done a great comparison between the two, so that's certainly worth checking out if you're pondering whether the trade-in is worth your time. To summarize their comparison – the editor's choice went to the Apple MacBook Air. After all, the 13.3-inch version is still cheaper than the 12-inch version of the Surface Pro 3. Still, the MacBook Air does not have a touchscreen, whereas its Surface tablet competitor does, so again – it all boils down to a matter of preference.

Another factor to keep in mind is that the maximum trade-in value is $650 – which means many MacBook Air models will have a lower trade-in value depending on their make and condition. The trade-in promotional campaign will run until July 31st and will only be available in Microsoft retail stores within the United States and Canada.