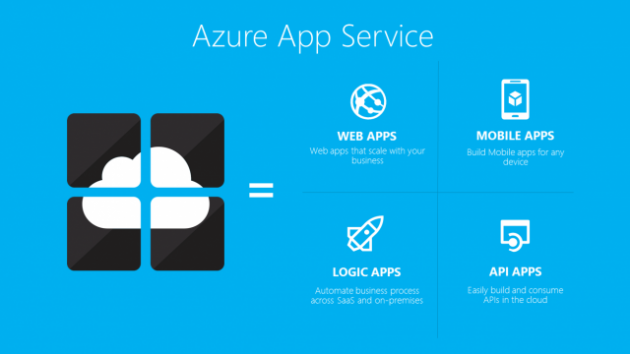 Microsoft just announced the launch of a new toolset for app developers that lets you create web apps, mobile apps, logic apps, and API apps all within a unified cloud-based platform called the Azure App Service. Microsoft opened the announcement of the new service with their frequently used mantra “In a mobile first, cloud first world,” before going on to explain that Azure gives developers a centralized and simplified solution for creating apps that support multiple platforms in one development process.

While the service itself is new, all of its components are not, as it is partially comprised of several pre-existing Microsoft app tools like Mobile Services, Biztalk Services, and Azure Websites. These three services have now been brought together under the Azure umbrella and are offered as a package with some exciting new capabilities added in.

What Happens to the Existing Users of These Services?

Existing users of the original 'Azure Websites' service are being automatically migrated to the more robust Azure App Service at no additional charge. While users of Microsoft's old 'Mobile Services' can also migrate over to the new service to develop mobile apps, it may take a little while for Microsoft to achieve complete cross-compatibility, as the move to centralize all of the services changed a few existing API services, so there are now some inconsistencies between the original 'Mobile Services' and the 'Mobile Apps' module in the new Azure App Services. However, Microsoft has stated that it's very easy for developers to make a few adjustments to port their apps over to the new service.

Solving the Biggest Complaint From Developers

One of the biggest complaints developers have is that there is too much hassle and effort involved with creating apps that can run bug-free across all devices and platforms. Delivering an app to multiple platforms typically involves the use of multiple skillsets, and developer's may have to program their apps to pull information from a number of different sources. Of course, all of this slows down the app development process drastically and therefore impedes developers' creative freedom and productivity.

Overall, the move to unify app development into one platform seems to be a step in the direction, and it meshes well with Microsoft's direction for Windows 10 as an operating system that will function the same across all devices.

What Does Azure App Service Include?

The components of the new Azure App Service can be best summarized by giving a succinct description of its four main modules:

Not Many New Features Added to Existing Services

Unfortunately, Microsoft hasn't yet added that many new features to the existing services that are now bundled into Azure App Services, but there are a few small additions to speak of, including a .NET web jobs feature and new production and staging slots. That is not such a bad thing though, as the apps already provide all of the tools and resources developers need to quickly create and distribute apps to multiple platforms within a single backend interface, under one runtime, without the need for multiple development environments.