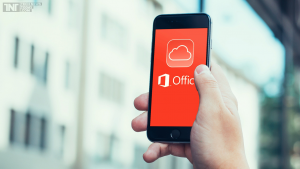 Today Microsoft added support for the iCloud storage service to the mobile version of Office for the iPad and iPhone. Although the service has not yet been fully integrated into the app, users of the iPhone/iPad Office apps can now open files from their iCloud storage account from directly within Office.

Microsoft has added the limited iCloud support to all three of the apps included in the Office suite – Powerpoint, Excel, and Word. Users can find the option to import documents from iCloud by clicking the 'More' button in the 'Open' panel of each app. So you would tap 'Open', then 'More' and you would see the iCloud option – simple enough. Once you're finished making changes, you can upload the edited file back to iCloud within the Office apps.

Unfortunately, at the moment it seems it is not possible to save newly created files to iCloud from Office, but it is still early in the update and we expect to see this feature implemented eventually.

While the move may surprise some who see Apple as a direct competitor with Microsoft, and more importantly, iCloud as a competitor with Microsoft's OneDrive, the update appears to be part of a broader initiative to fully integrate the mobile version of Office with a variety of third-party cloud storage services, including Box, Dropbox, Citrix, and others.

Microsoft is calling this initiative the Cloud Storage Partner Program. It makes sense to go this route - you're not going to stop people from using the cloud storage service of their choice, so you might as well provide support for all of them if you want your apps to be as well-received as possible.

Last year Microsoft added support for Dropbox after announcing that they had formed a partnership with the company to facilitate direct integration between Dropbox and the mobile versions of Office. This led to users being able to link their Dropbox accounts to their Office apps on both iOS and Android. Last year's Dropbox integration also let users open documents into Office directly from within the Dropbox mobile app.

In comparison to the Dropbox integration introduced last year, today's update to iOS brings relatively limited support for iCloud. Not only can you not yet save newly created files to iCloud from within the Office apps, you also can't open a document from another cloud storage service (i.e. OneDrive) and then save it to iCloud; you can only upload edited versions that you imported/opened from iCloud. Another limitation is that there is no option for iCloud in the “Add a Place” dialog, even though there is an option to add DropBox.

According to Microsoft, this limited functionality stems from the fact that Office for iOS so far only integrates with the 'Open' operation through “Document Provider extensions,” allowing users to utilize the Document Picker top open/edit documents from within Office apps without having to create a duplicate. Essentially this means you are currently limited to pulling a file from iCloud, modifying it, and uploading the edited version back to iCloud.

While this limited support may be temporarily disappointing, Microsoft has given assurance that this is “a Preview Program,” and that over time it will work to extend the compatibility between third-party storage providers and all versions of Office. In particular, the company is working on a separate initiative to allow cloud storage providers to integrate with Office Online, which is the web version of the app suite. At the moment Citrix, Salesforce, and Box are in the process of integrating their storage services with the Office Online web app.