Home
Articles
Interview with the Developer of Eminence: Xander's Tales - A Gorgeous Mobile Game To Hit the App Stores in 2015

Interview with the Developer of Eminence: Xander's Tales - A Gorgeous Mobile Game To Hit the App Stores in 2015

What has been happening within the last few months can be described as a sharp increase in the amount of quality games surging on app stores. It's delightful to see these new games that look sharp, play smooth and sound better than what used to wow players.

That is why when I saw Eminence: Xander's Tales screenshots in Twitter, I knew it was going to be a hit. Everything I found out about this game, up until last night's two hours with the online Demo speaks in favor of my first impression. Let us see why.

First, there is so much that is packed into a single game, I envision spending months playing it. On the surface, it is a card battler, where you will collect, trade, craft, conquer and buy cards that look like nothing short of brilliant. Then, there is the role playing element, where you will craft your own little hero, choosing from a number of looks. Dig deeper, Eminence combines MMO and RPG wrapped in a healthy dose of visual glam, deep and compelling story, a fantasy world to explore and a complex system of gameplay, battling rules, markets, crafting and more.

Second, I love the eclectic aesthetics of Eminence. The cards and the worlds look fabulous, so you are in for a visual treat. There are over 200 card divisions of mystical creatures, beautiful females, and mighty males while the card gameplay itself is so addictive and challenging, you will want to master it. 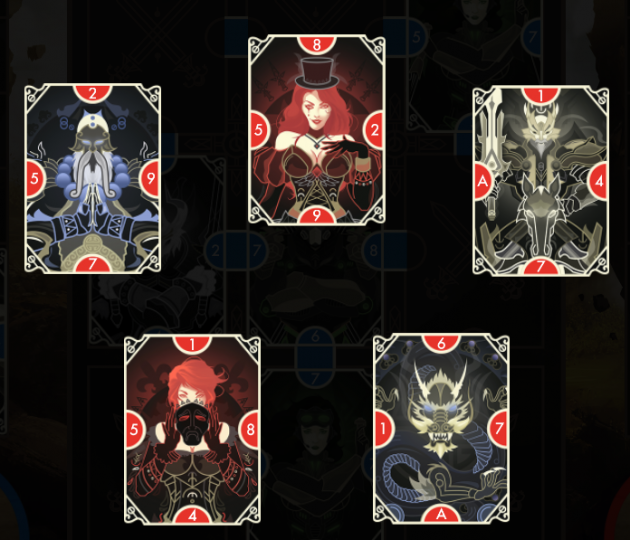 Third, the features list is too long, but here are some select - craft your own cards doing awesome sinister alchemy, trade or steal cards, complete quest, explore the huge fantasy world,  online multiplayer mode, global events, PVP mode, build a guild of your own and battle other guilds.

The fourth reason is the fantasy world of Artalys and its complex, evolving story or inevitable Armageddon and a hero trying to save the world. 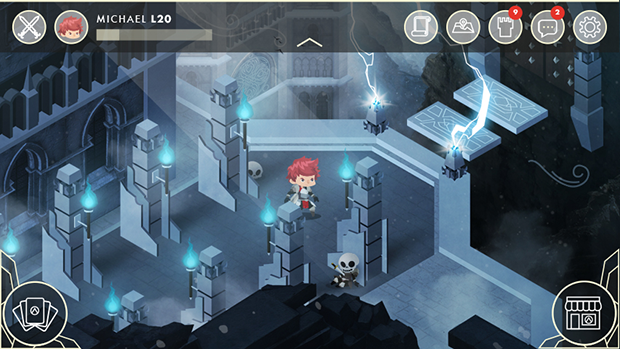 The team behind Aeterna Studios starts with: 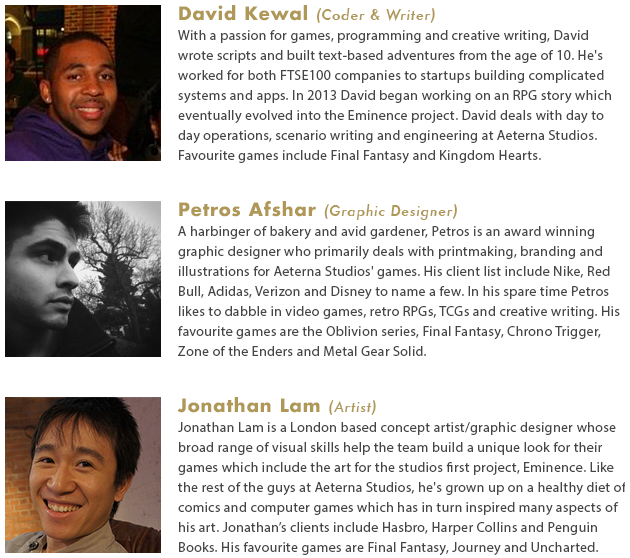 Today, we digitally sat with David Kewal, Managing Director at Aeterna Studios to get some details from behind the scenes of making Eminence.

First of all, let me congratulate you on an awesome game that made Twitter buzz with excitement. Everyone is really anxious to lay their hands on the full game, and until then, we will be toying with the Demo. Tell our readers how you got the idea of the game?

Thank you for the kind words! The idea sort of came out of nowhere! We all grew up on a healthy dose of RPGs and dreamed of one day creating our own. We began getting into TCGs a little later on.

Myself and Petros used to write RPG scripts just for fun. After a lengthy period of not seeing each other, we caught up and rekindled an old habit. Ideas were thrown around conceptually, but shortly after we conjured a plot which was worth investigating. We then explored the idea of having this plot serve as the backbone for a game.

How long did it take for the initial idea to mature into a project you started working on?

The project has constantly evolved since its inception. Shortly after we ironed the core story plot of the game, Petros and Jonathan began putting together some initial concept artwork and I continued evolving the story. Eventually it got to a point where we realised we were onto something and that's when things really started to take shape.

As the story developed, new concepts were introduced such as an open explorable world and the integration of key mmo elements. This approach has continued to go on to this date, we're continuously refining and evolving the game to make something people will enjoy.

Are there many people in your team? Is this your first project as Aeterna Studio?

The core team consists of David Kewal (managing director), Petros Afshar (creative art director) and Jonathan Lam (game director). Yes this is our first major project together and for our studio.

In Eminence description, you say the game will be free to play, with IAPs, but the players will be able to earn in-game currency by playing. In most games, players who buy power-ups usually bully those who grind for loot by playing. Will there be any system that would prevent bullying?

Yes. Eminence uses an in game currency, known as Eminence Coins, which allows players to purchase in game items similar to the way "Gil" or "Gold" found in other RPGs work. Armour, Gear, Equipment and Card packs are all purchased with Coins through NPC vendors and the marketplace.

But in addition to this, players will be able to earn Coins and in game items like card packs via normal gameplay through various activities such as winning card duels, completing storyline quests and winning tournaments. Not to mention, there's also a generous daily freebie card pack all players get every day for life.

We've taken steps to ensure there is no competitive advantage for those who purchase additional coins as our card distribution is based on probability draws. We randomise the distribution of cards in a fair and intelligent system which replicates the real world experience. When you pay for a pack of cards in a store you don't know what you're going to get and this is the same within Eminence. This provides flexibility for people who want to gather card packs by grinding or those who want to gather them through the purchase of additional coins. Either way, both individuals will experience the same card probability draws when opening the packs.

The game seems like a very in-depth and complex one. Will it be a heavy download, RAM and power-hungry? Will it require Internet connection to play at all times, or will there be an offline mode vs AI?

As the game is still in development, we're still refining those details. But since we're targeting smartphones and tablets, our aim is to keep the game client as efficient as possible. The single and multiplayer aspect will be seamlessly integrated into the open world. So what will happen is you'll open the game and enter the world. If you don't have an internet connection, you can progress with your adventure by completing the storyline quests. If an internet connection is available, you will see other players in the world and be able to engage in the mmo features.

What platforms will you be covering in your initial release?

We're initially aiming for smartphones and tablets (both iOS and Android) but plan to do a PC/Mac port and eventually consoles.

The game is an obvious hit, even though it hasn’t been released yet. This seldom happens with newcomers to the market. What stands in between the project as it is now and the released game on mobile app stores? In other words, what is the main challenge right now?

Resources! As it's only the three of us working on this game, we're quite limited in terms of resources and budget. We're also working on this project around day jobs which is another challenge. The more we raise on Kickstarter, the more hands we can bring on to help speed up the overall development of the game.

What perks do you provide to your Kickstarter backers?

Backers will not only be able to exclusively preview the game before the public, but get their hands on Kickstarter-only items. These include cards, armour and gear. Backers who pledge higher are rewarded with the opportunity to actually contribute to the game by creating their own Cards/Characters, Divisions and even Lore.

Do you have an estimation of when a [closed] Beta will be available?

Based on a successful funding of our minimum goal, we'll aim to get a Beta out around Summer 2015.

We like to ask tech nerds personal questions to give our readers a sneak peek at the real people behind their favorite apps and games. Do you spend much time with gadgets and monitors? Do you have time to disconnect from tech at all? If yes, what do you like to do in the 'real world' (any hobby, sports, partying applies)?

We have some pretty interesting hobbies across the team. Jonathan is an undercover Wushu champion (although he dumbs it down), Petros is an awesome dancer and David almost got a scholarship to play basketball in the US during his younger days! It's quite hard to disconnect from tech as our jobs all revolve around looking at a screen for the most part of the day. But we're all good friends so we chill and hang out, play games and all that good stuff for general down time.

Do you have a personal list of top 5 mobile/desktop games of all times?

So this is a grouped collection of myself, Petros and Jonathans favourite games of all time (in no particular order):

Download3k thanks David Kewal for the time he took in the middle of hassle of their ending Kickstarter project to answer or questions. We count on seeing Eminence on app stores in 2015, so good luck to Aeterna Studios!