Everyone knows iOS is a great mobile operating system that has a lot of cool apps to offer, but not everyone can afford to buy an iPhone to get the full experience. If you're looking for a way to run iOS on your Windows machine, you'll be pleased to learn that there are a number of emulators and simulators that will let you run apps directly on your PC. If you already have an iPhone or iPad it might be better to mirror your iOS device onto a PC screen instead, as that would provide more complete functionality than even the best emulators on this list. With that said, here's a list of the most popular and useful iOS emulators for running iPhone and iPad apps on your computer:

iPadian is by far the most popular iOS emulator for the PC, but it still has a few limitations. First, you won't be able to access the actual Apple App Store or download apps from iTunes because they're encrypted using Apple's FairPlay DRM technology. However, the developers have included their own proprietary “Apps Store” that comes with hundreds of the most popular apps. Thus, iPadian provides a way for you try out the basics of iOS on your computer, but it's certainly not the full experience. Still, it is refreshing to see iPadian simulating the appearance of an iPad's operating system, even if it doesn't pack the full power of the ever-expanding app store. One thing to be aware of is that there have been reports of malware in the newer version on the official website, so it's recommended that you install the original from CNET instead.

MobiOne Studio is a cross-platform app development tool that can be used to create, test, and run iOS and Android apps. It can be used as an iOS emulator but it isn't an exact simulation of the iOS environment. Nonetheless, it is a very powerful tool to have, especially if you plan on getting into app development. Plus, it can accurately show you what an app will run like on different versions of iOS or on different devices (i.e. - iPhone, iPad, or Android phones), and the development side uses drag-and-drop functionality to make it very simple for anyone to use. The iOS emulator module is called the MobiOne Studio Test Center, and can be accessed by clicking Tools → Test Center at the top of the MobiOne interface (as shown below):

Appetize.io is kind of like MobiOne in that it is a development and testing oriented tool that can be used to run mobile apps on your PC. However, instead of operating as a native desktop client, Appetize.io is available as a web-based service, so it can be accessed from any browser and it doesn't consume any of your PC's native resources. The free version lets you have 2 concurrent users signed in at the same time for up to 100 minutes. After that you can upgrade to the basic edition for $40/month, but this service is typically best for developers. Still, it's an option worth mentioning because it's essentially a web-based simulation of various versions of iOS on demand, as you can see by the demo settings screenshot below: 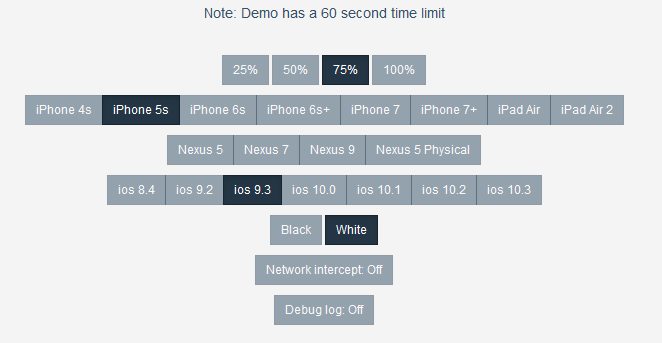 Emulating iPhone or Android in your Browser with Appetizer.io:

Xamarin TestFlight is a popular tool for developers but you can use it to upload and emulate iOS apps on your PC as well. Still, it's definitely a more advanced approach, but the benefit is that it's frequently updated, comes in the form of a feature-rich desktop client, and lets you run and test the latest iOS 8 apps with great reliability and accuracy.