Home
Articles
How To Prolong Battery Life In Android Smartphones

How To Prolong Battery Life In Android Smartphones

It's no secret that many functions and applications literally "kill" the battery in your smartphone. They are continuously and constantly running in the background without permission, even when you are not using them.

Here are the main culprits that consume your smartphone’s battery and how to deal with them.

Undoubtedly, most users would like the smartphone battery to last from the time they wake up in the morning until they fall into bed in the night. But this is relatively impossible (for most people) because several energy-intensive applications are used throughout the day.

The guilty features of apps

The following apps are found on most smartphones. What’s particularly incriminating is their features that are continuously active, regardless of whether you’re using them.

Let's see which features consume the smartphone’s battery, before moving on to greedy apps and how to deal with them.

There is no doubt that beautiful graphics greatly increase your experience with the smartphone. However, the more complicated the graphics are, the greater the impact is on the battery.

Even though the smartphone is trying to save energy, the constant app notifications running in the background won’t let it rest.

When an app is designed to use GPS, the location feature on the device is constantly enabled, which causes even further battery drain.

Energy-intensive apps that kill your battery

In the researches performed for figuring out the biggest battery-draining culprits, AVG categorized apps into those that run automatically at startup and in those that are launched by the user. 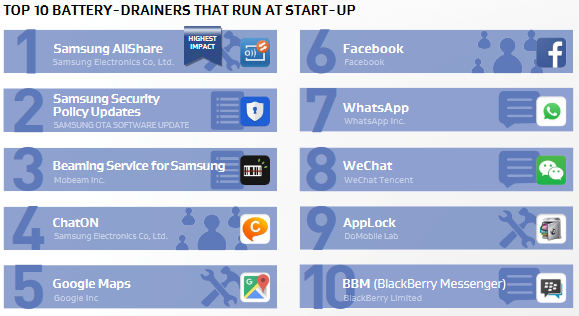 Impact on battery (launched by user)

Most people know that there are hundreds of applications available in the Play Store, designed to provide longer battery life for the smartphone devices. It is true that some of these applications were useful in the past, for smartphones that belonged to those eras. But we cannot say the same for today’s smartphones. 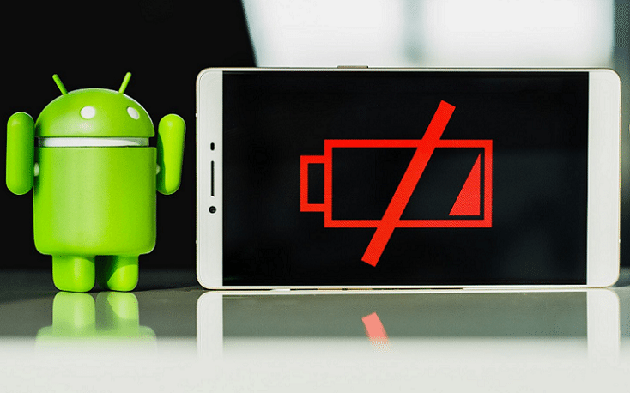 This is mostly a myth, as there are very few apps that can really increase the battery life of a modern Android device.

This myth has also been confirmed by Google's introduction of Doze mode in Android Marshmallow and Android Nougat. This is a function that offers real improvement in the device’s battery, making battery-saving applications unnecessary. However, there are some apps like Battery Life that we mentioned in older articles, which can actually be of help.

Doze mode in Marshmallow also has a drawback, if you could call it that way. It maximizes the smartphone’s functions only when the Android device is completely immobilized and the screen is turned off. If you’re moving and the device is in your pocket or bag, then no dramatic battery improvement will be achieved because Doze in Marshmallow is not working when it detects movement on the device's accelerometer.

This is not the case in Nougat, where this extraordinary feature provides the greatest battery-saving functions even when the device is still. 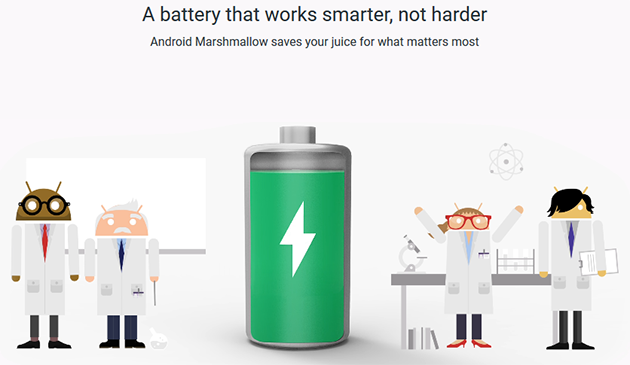 The best feature of this built-in function is that it runs automatically in the background. You do not need to make even the slightest configuration in order for Doze to increase the smartphone’s battery life.

Some newer devices, such as Samsung, incorporate Aggressive Doze features. This way, they provide further battery improvements, after the user’s intervention.

Speaking of performance-enhancement apps, you should be aware that most apps (known as Task Killers or RAM Boosters) should be avoided because they consume the battery even further. In fact, some of these were included in the researches for the greediest applications.

How to deal with greedy apps

Android Nougat brought new features with Doze, which further enhance the smartphone’s battery. However, not everyone is using the new version of Google's operating system.

Therefore, we’ll see how to deal with the energy-intensive applications mentioned before, which are the primary causes for the battery to run out. This applies to all versions of Android, including Nougat.

An excellent utility was recently released, which allows you to clone apps into lightweight web-based applications. This way you can eliminate the battery-killing consequences of running applications without sacrificing any feature.

In addition, you will be able to free a large part of your storage space.

Hermit is undoubtedly the biggest weapon for significantly improving smartphone battery. This small app is only 2MB in size and can be downloaded from the Play Store. It is compatible with Android 4.4 and newer.

Hermit, in addition to improving battery life, is ideal for Android devices that do not have high specifications. The app has a completely different mentality than usual performance enhancing and battery saving applications. It's something that makes it unique for the time being. 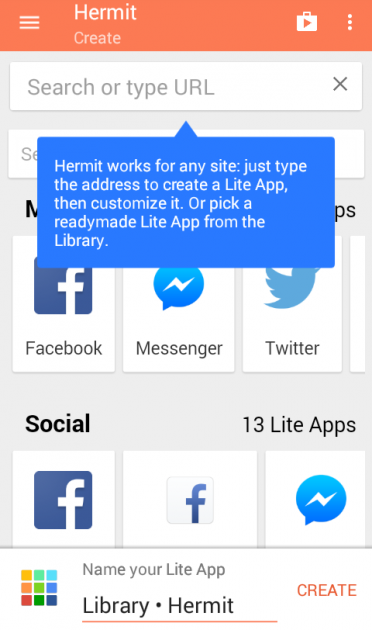 In addition, thanks to its unique features, you will be able to have dozens of lightweight applications. They will all take up about the same space that would be otherwise consumed by a single energy-consuming app.

After launching Hermit, the first thing you have to do is tap on the "+" icon that you can add battery consuming apps. You can add as many apps as you like. 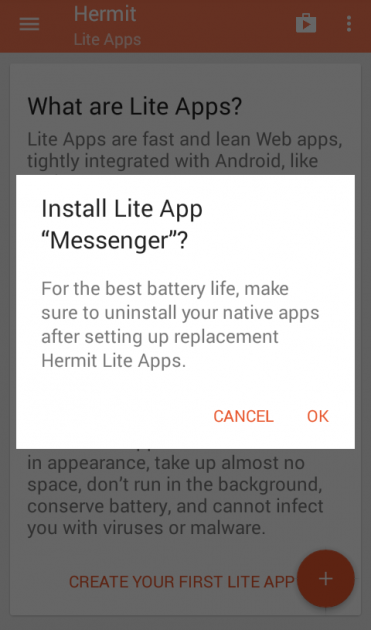 During cloning procedure, Hermit will inform you that it is necessary to remove the original applications. This will ensure that the battery consumption will be actually improved. If these apps are preinstalled in your device, you won’t be able to remove them unless your device is rooted.

In addition to converting apps into lite applications, you can also turn your favorite websites into fast web apps. This is achieved by typing the website’s URL in the corresponding text field at the top of the screen.

Once the conversion process is complete, Hermit will create a shortcut of the lite apps in the home screen for easy access. 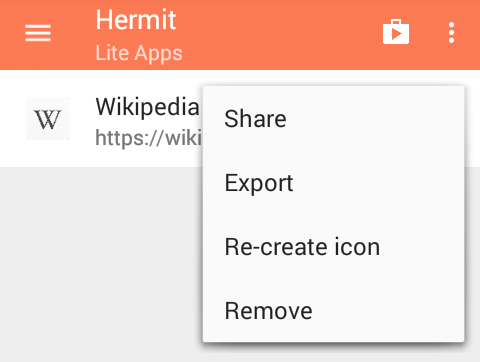 General guidelines for battery improvement in all operating systems

With smartphones becoming more and more powerful every year, it is a quite challenging task to make the battery last throughout a whole day.

Apart from applications that are the main suspects in battery consumption, there are some easy but necessary measures you can take. Not just in Android devices, but in all mobile operating systems. 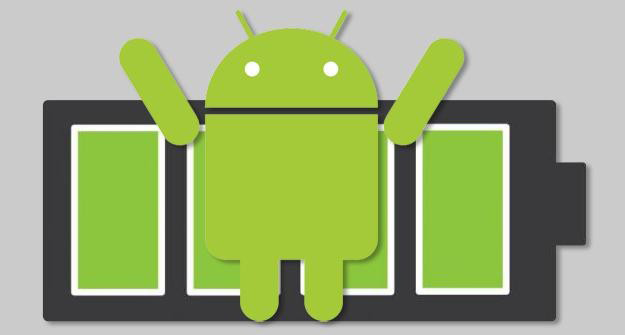 Since charging your device every few hours is not very practical, let's take a look at the actions that will help increase battery duration.

Keep these guidelines in your mind, and your device’s performance and battery duration will certainly improve. Note that some devices are just not meant to have high specs; thus, no matter what you do, there is a particular threshold in terms of performance that you won’t be able to exceed.

If you have any thoughts or suggestions, let us know by posting in the comments section below!