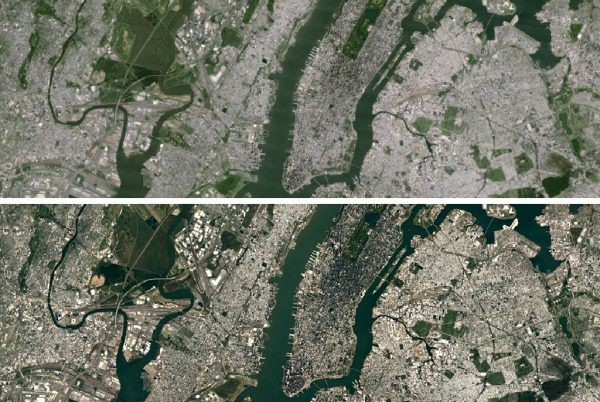 Google Earth’s images are changing and becoming better and of higher definition, in order to display landscapes and places in greater detail.

The images provided by the renewed Google Earth are now coming from the satellite Landsat 8, which was launched in February 2013 by NASA. The image quality of Landsat 8’s cameras is clearly superior to that of its predecessor, Landsat 7. In fact, Landsat 7 was facing a hardware problem lately, something that made image quality on Google Earth’s map even worse.

Google stated that it leeched about one petabyte of data from Landsat 8, in order to be able to see if the new images provided by Google Earth will be significantly improved compared to the old ones. In order to demonstrate the superiority of Google Earth images, the internet giant has released pictures of before and after the use of Landsat 8, as shown in the picture above.

The new images are already available to anyone who uses the latest version of Google Earth, which will be gradually available to everyone who is using a device with the Android or iOS operating system, as well as to those who access Google Earth from their PC.