Google Now, the information sharing facility that merges search data with spoken search terms, is growing up. Not only will Google include its own data minded information, it will now include useful bits of information sourced legitimately from third parties in order to broaden the appeal of the Google Now search. 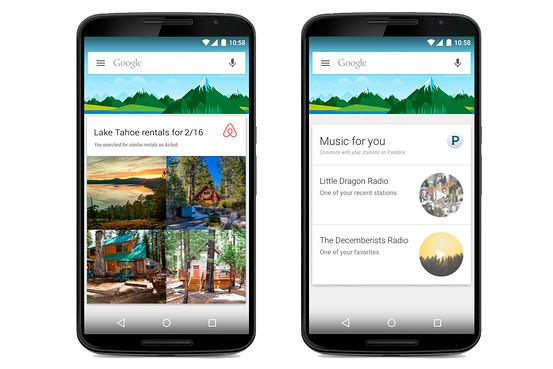 What was once useful just to find a web page can now provide updates on flights and reservations, remind the user about upcoming appointments in their calendar, check on the status of packages en route to the home or business address, cover breaking weather alerts in the area, and highlight any major news stories, and more.

Before this latest change to Google Now, the information Google presented came from its own servers including Gmail user information, emails sent and received, recent search terms, and web pages visited via Google search engine. In the future, Google will be incorporating information sourced from other major sites to make Google Now more useful.

Similar Change To One Yahoo Made

The change is similar in nature to the corporate shift that Yahoo made not too long ago when they realized that they had become far less relevant and so decided to cover news stories from across numerous media sources. This instantly made their news pages more relevant for users and help maintain and improve traffic figures. Google could now be going after the same basic strategy with this change in approach to how the Google Now service is managed.

One third party app included is Airbnb. The accommodation locating app, Airbnb, can feed to Google Now the recent searches that the person has looked up plus the booking dates they were most interesting in. A reminder can appear on a Google Now card around the time of the booking dates asking the user whether they wish to make a booking for this property or not.

As many as 40 new Google Now cards will be created depending on how many third party apps are already installed on the device when running the Google service and what searches have been run on those apps.

Google runs with cards that fill up with relevant information. They are basic around the idea of old school index cards which can only take on so much information before running out of space. A good concept especially for space constrained smart phones and tablets which benefit from brevity.

No Money Passing Hands Yet

There is the potential that the referral of users to the third party app could increase their use and earn the app makers money either through in-app transactions or even ad clicks (through Google Adsense for Mobile or another ad network). At the present time Google is content to not ask for a piece of this action because their goal is to provide a better informational service to its users rather than to milk every dime that they can.

The ride sharing firm Lyft is participating in the Now upgrade. A Now card will be created when a user arrives at an airport expecting that they may need a ride home or to a nearby hotel. Kayak can also create a card to let users know when there is a recent price drop on a previously searched for flight. Ebay will also let users know about auction items that the user has placed a bid on. A Zillow card can be created displaying new properties that have been listed which fit the previously searched for criteria. Given that there are 30 third party apps supported there are many possibilities here to help users.

In a different twist, news organizations like The Economist will be able to create a Google Now card with useful news stories and The Guardian newspaper will create recipe cards for you. On the musical side of things, Shazam will remind users about the songs they listed to and liked in case they wish to buy a digital version of them.

The emphasis with the Now cards is to provide a predictive service which anticipates needs and provides useful links to complete transactions or provide more in depth information to users that the third party apps can provide. Some of this will connect directly to previous searches, in order cases prediction software engines will be used to come up with possible alternative purchase or destination options.

These new third party integrations are optional for the present time. Only the services where the apps are installed on the device will be able to share anything directly with the Google Now app.

Will The Improvement Be Too Intrusive

The question of how far is too far will continue to play on the minds of consumers when using these kinds of search services. When using the Google Chrome browser, Google gets to see everywhere you surf and adjust adverts displayed to promote offers from web sites and brands you have recently visited. Users have previously complained about their emails being “read” in order to customize what adverts are shown when using the Gmail email service.

It comes to a certain point where it can begin to feel like an invasion of privacy or like we're all being watched which essentially we are but we may not like to be reminded of this even in a post-Snowden world that we all live in now. Companies will need to consider what data is too sensitive to be shared with Google Now and what will be okay to pass along.