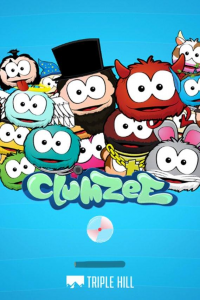 Although I have reviewed many endless games in the past, hardly any of them belonged to the Endless Climbers category. That was mainly because there aren’t as many around as the runners, and those that are actually available, are not engulfing enough and tend to get boring pretty early in-game. With Clumzee I felt that I could enjoy a climber that can keep my interest in the long run, and I wasn’t disappointed. It’s not complicated or as exciting as runners but for a climber, it sure manages to stand out and give something different to the genre.

Clumzee tells the story of a small furball named Jimmy who is has been given the nickname “clumzee” by his not-so-nice friends. Because of his terrible bullying experiences that he suffered, he decides to take matters into his own hands and climb the legendary (and very dangerous) Dreaded Path in order to put the awful bullies in their place. In there, he will have to face a cyclopean monster who tries to get to Clumzee as you climb and eat him. Help sweet Clumzee to climb as much as he can to reach his goal!

The game begins with a small video introducing you to the story. This intro will play every time you open the game, but there is a skip button of course, which will save you some time. The controls are fairly simple as you only have to tilt your screen to change your position and tap on a rock to make clumzee use one of his limps to climb. His limps are stick and that allows him to move from one stone to the next but you have to be precise on where you’re tapping and also make sure the stone you choose is not too far above otherwise his limps won’t reach it, despite stretching enough. 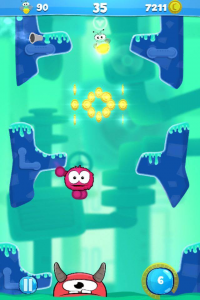 You have to act fast though, because the cyclopean monster will get closer the more you hesitate to make the next move. Coins and magical fireflies are also waiting for you to collect, but also evil minions will try to stop you from progressing any further. Coins unlock different worlds (up to 8 to choose from) with each one granting you a different ability; for example, in Winter you can summon a freezing storm to slow time down, and in Castle you can destroy traps with powerful gloves. The magic fireflies unlock different characters including a wizard, an alien, a Viking, various animals and more, giving a total of 30+ characters.

As you progress, you will have to deal with more than just minions as more obstacles will start appearing such as cannon fire and spinning gears that you must dodge at all costs, if you don’t want to end in the cyclopean monsters’ stomach. The difficulty level, although normal, starts to change when you encounter new obstacles and having to find the right timing to move from one rock to the other without being shot at is a hard procedure. The advantage to this situation is, the level is the same every time you play so you know what to expect when you start over. Also, there is no life system and you can start over and over as many times as you wish with no limitations to keep you stranded.

If you don’t have enough fireflies, then you can buy a character for $0.99 or $1.99 each. In addition, you can exchange coins for a large portion of fireflies and also buy the premium package that contains all premium characters for $5.99. That’s all there is regarding the IAPs, and as you can see it’s done in a way that doesn’t have a direct effect on the game's difficulty. 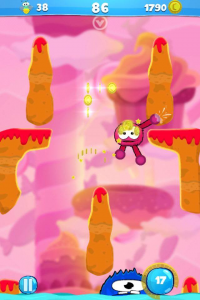 The 2D designs are hand-drawn and look very cartoonish. Clumzee is very likable and makes you want to squeeze him due to his extreme cuteness. The environments are colorful, and every world is full of imagination and surprises- so much, even the cyclopean monster is fun to look at. The music is joyful and fun and matches the game’s atmosphere perfectly.

Clumzee is great for spending some fun time with, as it is simple yet challenging and with easy to follow rules. It does something different with the endless climber theme and that is obvious right from the start. If you’re tired with the endless runners but still enjoy games in which the main purpsoe is the high-score, then I suggest you give Clumzee a try. It’s cute, funny, with fair IAPs and of course free. After all, who doesn’t like a lovely furball?

Clumzee screenshots (above) and trailer (below)