Today’s game review is a bit different than what I usually do and this is because Buried belongs in a unique type of games that focus on the story and choices more than anything else. Developed by studio Bromoco Games, it offers a great experience to players that want to try something new or different than the norm.

I wasn’t sure if I should write about the plot in a separate paragraph as I usually do, because basically plot and gameplay in this game are one and the same. Allow me to explain. Buried is game in which the player reads the story of the main character Roger, a logger that finds himself in a very strange and disturbing situation in the woods after an accident took place. Now, he must find out what caused the accident in the depths of the Earth.

The story is in the present tense and it is said in 1st person, aka from Roger’s point of view. I would like to delve more into the story but it would spoil everything and for that reason the review will also not be a long one. Buried is an interactive book with images and audio (not voice acting, only BG music) in which you will be asked to choose between options that affect the progress and outcome of the story, some more than the others. The story is very well-written and it will captivate you right from the start as it wastes no time getting to the good stuff. It consists of 5 chapters and I actually finished the whole thing in one sitting because I couldn’t let go and kept telling myself I would stop after the next choice, which never happened of course. 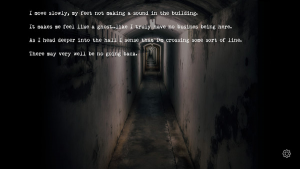 What I can say regarding the plot, is that it is a horror sci-fi story with a very interesting premise and many shocking moments. At the end of each chapter you are shown a percentage graph that depicts what percent of the player made the same choices as you, which I found very interesting because things I considered normal, were not chosen by most people and the other way around. What I also enjoyed is that you only need to use your mouse to pick a choice and not to change “pages”. Each line appears in the best pace and you can enjoy the story without having to lift a finger. The characters appearing will have you caring for them and of course you will hate some others too. This connection between the player and characters will make some choices very hard to decide on. You can purchase Buried for both iOS and Android and PC for $ 2.99.

I recommend this game to all of you who like horror and want to experience something new or already enjoy Visual Novel kind of games. It is worth its price and you can replay it as many times as you wish without being bored, by choosing different options each time.

Purchase Buried on Steam and Amazon.