Home
Articles
Game Review: When a charm spell goes wrong, you end up in a...Corpse Party

Game Review: When a charm spell goes wrong, you end up in a...Corpse Party 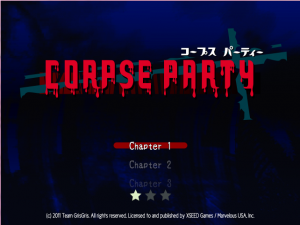 When it comes to horror JRPGs, one can’t make a list without including one of the most famous and impactful games out there, Corpse Party. Originally released on 1996 in japan, Corpse Party has since gone under many changes and upgrades, as well as sequels, spin-offs and more. Its charm didn’t magnetize only gamers but many manga series have been based on it, live-action movies and anime as well.

It is easily on the top of horror RPGs not only in Japan but in the West too. Its first official release on this side of the globe was only last year, when it became available on Steam. Although I will only review the PC version, I will make a brief review for the PSP/3DS sequel which is also available.

Corpse Party tells the story of 8 students of Kisaragi Academy, who together with their teacher, decide to perform a seemingly innocent charm that is supposed to make their friendship last forever. But things don’t go as planned, and the moment the charm is cast, they are transported to an alternate dimension and inside Heavenly Host Elementary, a school that has been shut down long ago due to the atrocities of an individual that caused the death of young children long ago. Separated from their friends, each student must find their way out, avoid death, and reunite with the rest of the team before it is too late for all of them. 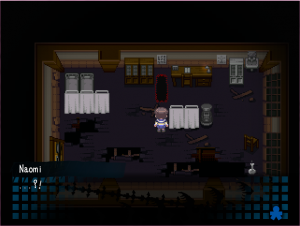 Corpse Party is an RPG with retro graphics and with complete voice over (the dub is Japanese and the text in English). The player will have to take control of all parties in the course of 5 chapters. Your task is to explore the haunted school, collect items, find spirits, uncover secrets and of course to make sure you keep all students alive.

The controls are easy to master and the menu includes an information panel regarding all characters, plus a list of students you couldn’t save (if it came to that). Speaking of saving, to save your progress you need to come across lit candles that are scattered around the school. There are many traps inside the school and if you fell into them, you will meet a Wrong  End. That is a game over but instead of instant death, you will be forced to see (or listen) to the consequences of your choices and basically feel really bad. A Wrong End can be also triggered by choosing the wrong answer on the dialogs that appear between the characters, although, it is not too hard to choose the right one.

Apart from the main chapters, you can also unlock additional extra chapters that don’t affect the main story but enrich your knowledge about the story and are very interesting to play. You will also need to look at your characters’ HP because in many occasions such as in chasings, it will be easy to receive damage. The most difficult part of the game, is navigating through the school and knowing where to go next. This is very challenging but stressful as well, because the location you’re in, is quite huge, and the puzzles not very simple.

Corpse Party offers many hours of gameplay and it is very addictive to say the least. The story itself is not for the faint of heart and not cliché either. You will be shocked, feel sad, and connect with the characters from the beginning. 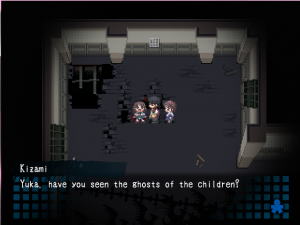 The sequel of CP, Corpse Party: Book of Shadows  is only available for PSP and 3DS and follows a different approach as it is in the form of a Visual Novel. When you complete the first game, inevitably you will wish to find out more, but if you are not a fan of VN type of games, you could instead watch the game on Youtube or other platforms.

Corpse Party is available on Steam, GOG.com and Humble Store for $ 14.99.

For a retro RPG Corpse Party is very polished and one of the most good-looking games of its kind out there. the colors, the animations and the character designs are all very detailed and the voice acting top-notch, although if you’re not used to Japanese it could take some time to get used to it. Another impressive aspect of the game, is the OST. The main music is so sad and eerie at the same time, that it will be hard to get off of your mind once you listen to it.

Corpse Party is a game that is worth every penny you spend on it and won’t regret it no matter what. It gets quite hard at times but even after some failures, you will find the right way of doing things and the result will make every effort worth it. It is unique, polished, and very entertaining. Perfect for all horror RPG lovers. Let us know your thoughts and impressions in the comments below.