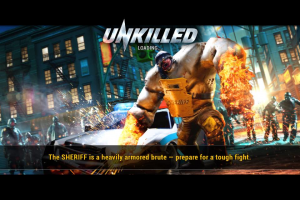 With Halloween having gone by, I couldn’t help but review a game for a spooky celebration, and what better choice is there than a good zombie game that deals with the most famous apocalypse of recent years. Developed by the same studio that brought us Dead Trigger and Samurai II, Madfinger Games, Unkilled is also a game with lots of zombie killing and gore. Fighting against the undead will never become boring, will it? Games such as this are the proof that zombies’ myth is here to stay and offer fear and chills to all of us, especially during Halloween.

In Unkilled, our MC Joe, finds himself in the middle of a post-apocalyptic New York that is almost completely conquered by the undead. As part of the anti-zombie unit WOLFPACK, a private military organization designed to find, track, and eliminate the zombies before they take over the world, he’s trying to find a way out, killing as many zombies as possible in the process and saving people. There also seems to be an evil organization behind the scenes, run by someone known as The General that is somehow connected to the outburst. The premise is interesting and promising as to be expected from the Dead Trigger team. 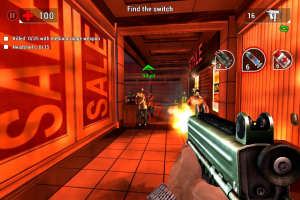 When the game begins you are shown a small cinematic that aims to make you familiar with the situation you’ll have to deal with. Needless to say, destruction and chaos are the main elements of what you’ll see: Zombies of all kinds causing havoc and you trying to survive the hell despite the chances of getting out alive being low.

As a 1st person shooter game, aiming is your top priority, so having smooth and intuitive controls is absolutely necessary and thankfully, Unkilled excels in that aspect. You use your left thumb to choose where to move to, and your right thumb, to turn your head and look at any direction. Shooting shouldn’t be of any concern to you as your weapons fire automatically every time they lock on a zombie. This definitely takes one burden away because there are times when hordes of zombies attack and aiming will be hard enough by itself. There are however occasions where you’ll have to cover for your squad mates by using large immovable weapons and riffles that you’ll have to aim and shoot by yourself and it’s a bit tricky but challenging at the same time. 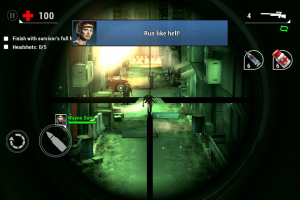 When you finish a mission you are transported to the Mission Map which shows you where you are and the next mission you’re currently assigned to. Every time you complete a level you are given special rewards in the form of cards that equip you with either weapons, gadgets, boosters, chests and more to use at your favor. Weapons will need to be upgraded from time to time to match the difficulty of the next level. When you upgrade you can choose the normal process which has a timer for the upgrade to be finished and ranges from a few seconds to many minutes depending on the upgrade. Alternatively, you can spend Gold to speed up the process.

Boost ups include: multi-rockets that equip your gun with the ability to fire 3 Hi-Ex Guided Rockets and as a result increase the impact of firing and destroy zombies in one try, Adrenaline that gives you the ability to slow down time to help you aim better and at the same time increases the damage, XP and income, medicine supplies to recover your health and more. Money is also part of the collectibles and is necessary for upgrading your weapons unless you want to spend gold to avoid the timers as we mentioned earlier. 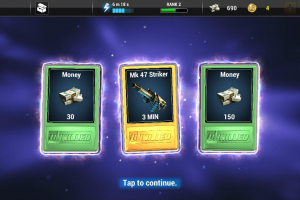 Sometimes destroyed zombies will leave behind medicine for you to collect. Ammunition is also not a problem as you have unlimited amount on each mission. There’s only a small gap of 2-3 seconds during which the gun needs to refill automatically to continue firing. Each mission includes some sub-missions apart from the main one e.g. finishing with full health, or killing an x number of zombies with a certain weapon. These sub-missions are important if you want to have a perfect, 3-star score for better rewards.

The game’s prime currency is the Gold, which you can purchase through the IAP store in bundles with prices that range from $ 4.99 for 500 gold coins and reach up to $ 29.99 for 4000 gold coins. They’re quite expensive as you can see, and the fact that gold is necessary for recharging your energy, upgrading with no wait, and for buying weapons and boost ups, certainly turns the IAP into a not so fair feature of Unskilled.

Thankfully, the game offers ways to get free coins by watching ads or subscribing to their social media. There are also the treasure chests available for free every day that rewards you with cards so things are somehow balanced through these. 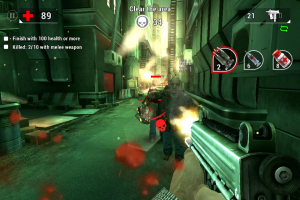 One of Unkilled’s many strengths is the visuals. The characters are very realistically designed, the zombies grosser than ever, and the gore very detailed for smartphone standards. The graphics are crystal-clear and the moody colors fit the post-apocalyptic atmosphere perfectly. The music is also in par with the plot and builds up the tension masterfully.

All in all, Unkilled is a great zombie shooter although it might get repetitive in the process. It offers a great deal of fun for the player with smooth controls, helpful guidelines and good graphics. It’s not the best shooter out there but it’s a great addition to the genre and a game that zombie fans will appreciate. Give it a try and let us know your thought and impressions in the comments below.