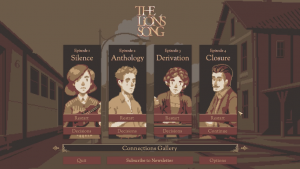 Austrian studio Mipumi Games has just released the fourth and final episode of The Lion's Song, a "narrative adventure game," that has first been released back in the Summer of 2016. The Lion's Song offers a pleasant story, perfect for the summer, that you won’t want to leave midway.

The game takes us to Austria at the beginning of the 20th century, where three charismatic young people are confronted with artistic and professional concerns. Wilma dreams of becoming a successful composer, but she has difficulty channeling her passion exclusively into music. Franz, though a talented painter, often loses his senses without knowing why. The brilliant mathematician Emma is oppressed by the society of her time because she is a woman. Each episode deals with the story of each individual, with the last episode linking the three heroes, describing their progression through the eyes of others. It may take only an hour for each episode but the narrative runs beautifully, without unnecessary scenes or unnecessary comments, and the story lasts as much as necessary without exaggeration. 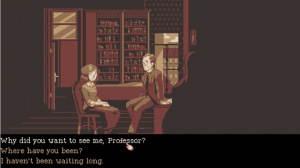 The Lion’s Song is a point-and-click game, with the left mouse button being used everywhere, from skipping dialogs (which remain on the screen until you click) to getting a description of the objects and moving around. The few times that you are going to use an object, a click on it is enough to pick it up and use it without you having to do anything more, since there is no inventory.

Both the first and the last episode offer minimal gameplay. For example, in the first episode you spend a lot of time talking on the phone with someone unfamiliar, and the gameplay is limited to choosing the phrase you want Wilma to say, while in the last episode you choose the order in which you want to hear various stories. Fortunately, the second and third episodes offer the most gameplay of the game, where you move to the city through a map, talk to other characters, and participate much more in the progress than being mere observers.

The puzzles are missing from The Lion's Song and I know this might be a turnoff for some players but the challenge of the game is to pick all the "right" answers when you are given the opportunity. Of course, these options are not always simple, nor do they always lead to the most seemingly right result, so it is worth repeating the game for a few times with different choices. At the end of each episode, all your options are displayed in relation to other players. Also, a visit to the main gallery's "gallery connections" rewards you with all the important elements you've found so far and explains how the characters are connected to each other. 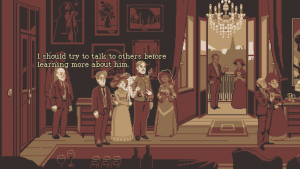 During the game you will visit a famous café filled with the intellectuals of the time, you will travel to the Alps and shop from a popular market. However, I wish there were more areas to visit, with more hotspots to explore.

The Lion’s Song is available on PC, Android and iOS. The smartphone versions cost $5 and the PC version costs $10 for all the episodes. You can also find the first episode for free on Steam.

The 2D retro graphics and the sepia filter, offer a very vintage look at the Austria of the early 20th century. Regarding the sound field, I wish there was voice acting because it would give the characters more depth but it's not an important issue. Gentle melodies make their appearance every so often, but they disappear rather fast, giving the game a very "quiet" tone. The sound effects are satisfactory, with the sound of rain following you for most of the first episode and the train engine in the fourth. 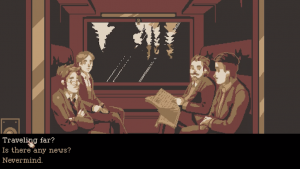 The Lion's Song captures beautifully the 20th Century Vienna, but has a limited gameplay that mainly involves left-clicking on the mandatory text on the screen and three different stories that do not contain puzzles or traps, but different choices that you can make.  It's worth a second play, so you can explore the alternative options of the characters and the finale presents a touching message that, although familiar, is not expected and matches the climate of both the era and the game. It's not just a third-person point-and-click adventure, but a small story pack that travels you in the past in a beautiful, exciting and nostalgic way. Let us know your thoughts and impressions in the comments below.

The Lion’s Song screenshots (above) and trailer (below)

#android #ios #games #review #the lions song #pc
Comments (0)
< PREVIOUS ARTICLE
What do the various Facebook Messenger circles near messages mean?
NEXT ARTICLE >
How To Connect Your Android Device To Your TV