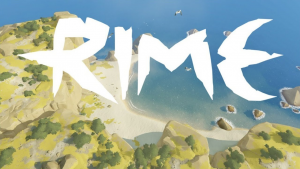 Rime by Tequila Works is a game that despite the difficulties it encountered until its release, it delivers a truly amazing experience to all who will give it a chance.

In Rime, you take on the role of a young boy and find yourself after a stormy storm, on the golden sand of an uninhabited island. Soon the noise of the seagulls helps you regain your senses. As you shake the sand out of your clothes, you see in the distance that the ruins of a half-broken tower are emerging. With a first reading, you are given the impression that your goal in the game is to restore your lost memory and at the same time discover the roots of the ancient and decadent civilization of the island. Yet you soon realize that this is just the "top of the iceberg", which represents a world that constantly changes its environments and thematic units, and you become an eyewitness to the evolution of an internal monologue that is bombing you with an endless flow of images, thoughts and memories. 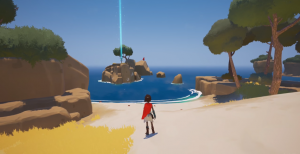 Any extra information about the plot of the game is at risk of betraying key elements of the script that it is good to discover on your own. Rime at one point may seem like a game bathed in the light, but the next moment does not hesitate to make gloomy or even macabre screening scenes that may make you feel particularly awkward as you gradually realize the sad reality your character is experiencing. The most impressive thing about the game is that it succeeds in telling a wonderful story based solely on images, without providing a single dialogue line from start to finish. Collectibles scattered across the five levels extend the lore as they unlock a unique scene in the final part of the game.

Rime's gameplay consists of a combination of jumps and climbing mechanisms that we encounter in a classic Tomb Raider game and a dose of environmental puzzles. The game puts you in this enchanting world by giving you only few instructions. You can turn to multiple directions and experiment with the basic mechanisms without any arrow or wider icon determining whether your act is correct or wrong. You are free to jump on rocks, climb on plants, swim or even dive into the blue sea. The projections from which you can hang in the environment are underlined with a slightly white color, while during a dive your peripheral vision decreases as the available oxygen reserves diminish. You may often be asked to stay for longer than the usual time under water. In these cases, you can pump air from the coral at the bottom. Mechanisms generally work fine, with a single camera blemish, which unfortunately fails to make objects in the room transparent, often limiting your visibility dramatically. 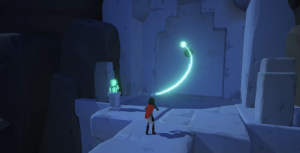 After a short wandering in the game world, you reach a place where you see in the center a sculpture that has the form of a fox. Having collected an essential number of key objects, your voice gives flesh and bone to the statue, which releases the cute animal from its chains, leaving in its place a spiral staircase that leads you to your next goal. The little fox accompanies you from that moment on your journey, as its crying works like a compass that navigates you through the levels of the game in the right direction.

Although the levels are quite spacious, there are distinct limits in exploration. However, the limitations have been set in such a clever and harmonious way as the environment around you that in no way breaks the so-called "immersion". So by swimming in a certain direction, you see toxic jellyfish preventing you from turning in a particular direction or walking on a bridge that is ruined behind you, thus losing the ability to return to a previous area.

The objectives are characterized by a relatively satisfying variety and offer the necessary design depth to keep your interest high from the beginning to the end of the game. At the same time, they maintain their difficulty throughout the duration, within the frameworks defined by the rules of reasoning, without ever being tiresome or irritating. So when an uncooperative wild boar, which likes to devour delicious delicacies, blocks your way, it is not difficult to understand how the fruit of the trees you met a few meters further is an excellent way to distract him. Also in the ruins of ancient civilization you often come in contact with robot metal knights. By feeding them with energy they move for climbing platforms for your sake, they demolish walls, or they provide help for completing collaborative puzzles. 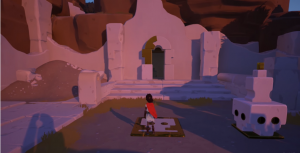 There are puzzles, in which you transport space-scattered polygons and then watching these shapes from the right perspective, sketch doors that lead you to the next level. Sometimes to solve them, it is necessary to create a pulsating wave that interacts with multiple objects in the environment at the same time or you are asked to complete a series of actions that turn a channel into a deep hole in the ground that fills with water so you can dive and emerge to a new exit. Also, by rotating a golden reel, you change the day-night cycle, so you can solve puzzles by playing with shadows and light.

Rime is available on PS4, Xbox one, Switch and PC on Steam for $35. 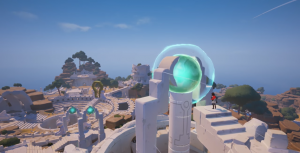 The visuals are beautiful and full of vivid colors. The game manages to capture the special beauty of the Mediterranean on an island where rich vegetation and wildlife of nature have managed to dominate again, eliminating year after year the last remnants of human presence. Sunless catacombs, waterfalls lying on rocky terrain and lush caves are just some of the splendid landscapes you see.

Rime's orchestral musical tracks perfectly highlight the feelings that each scene attempts to convey. The creators have chosen not to have dialogues in the game. However, there are moments when the little boy's melodic song creates an intense emotional load in the atmosphere. The environmental sounds of nature, such as the splash of waves, the screams of gulls and the rustling of the leaves, are flooded with feelings of serenity.

Rime is like a train of feelings that, filled with abrupt ups and downs, changes moods in the blink of an eye running at a dizzying speed and invites you to become a passenger. It is a rollercoaster of emotions that will have a huge impact on anyone who plays it. Let us know your thoughts and impressions in the comments below.

Rime screenshots (above) and trailer (below)